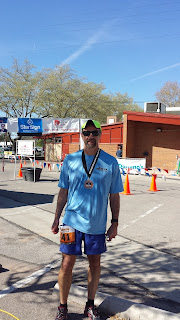 Faithful readers may recall that last year I ran the 2015 edition of the Sand Hollow Marathon.  I largely had a good experience with the race.  When 2016 rolled around, I looked at my calendar and figured it would make a nice weekend getaway.  Combine that with an attractive price and I decided to jump in.

The race was held about a month earlier than last year.  This had some goods and bads.  The good was that it was generally a bit cooler.  The bad is that for the St George / southern Utah area, it was heavy tourist season.  There apparently was a baseball tournament, a bike event and the Spartan Race just south of town (drawing 3000 participants).  This made getting a hotel / motel very painful.

Luckily I made hotel reservations well in advance (but not in advance enough).  St George and the Hurricane area were sold out and I wound up having to stay in Cedar City, about 40 minutes north of Hurricane.  It was cheap and actually worked out quite well.

Like just about every other marathon I've done, I slept pretty badly but managed to get in 4 or 5 hours.  I was up just after 4:30 and was out of the hotel room by 5:30. 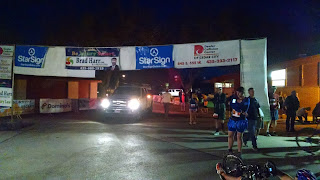 Thanks to knowing the location from last year, I got to the race site at about 6:15 (I even had time to fill my car with gas).  I was one of the first there and got a primo parking spot -- about 30 yards from the finish line.

I got my t-shirt (much improved over last year's) and my swag bag and sat in my car and prepared for the race.  It started prompt at 7AM. 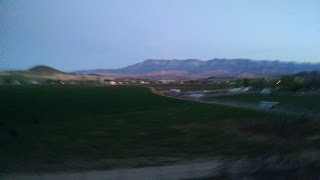 I knew the course from last year and I knew what the weather was going to be like.  While it was mildly chilly I knew it was going to get warm.  I saw a few people that were over dressed but I went out with last year's tech shirt, shorts and some throw away gloves.  I also carried my sunglasses and 28 ounces of Gatorade Endurance.  While it was dark when it started, I knew I'd need them in about 25 minutes.

I started off cautiously.  I didn't have any lofty goals on the race, on account this is a fairly tough course.  It isn't really made for personal records as it has lots of hills and I knew once the sun was out, things were going to get difficult.  I felt super comfortable with my pace despite feeling like everyone was passing me.

The first few miles are through the residential areas of Hurricane.  The roads aren't closed to traffic, but there was very little traffic.  The streets are also fairly wide and it takes a bit of nerve to run the tangents. 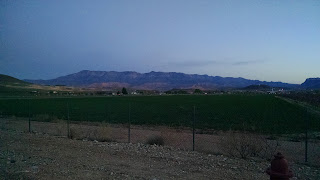 After a few miles the course definitely turns into more of an agricultural tour of Hurricane.  There are lots of cows, goats, horses and so forth to keep you company.  It was extremely peace running along here and at this point you are still largely running with other people. 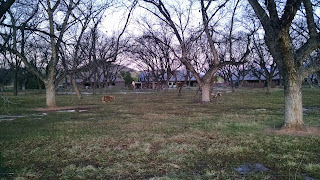 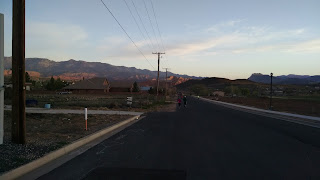 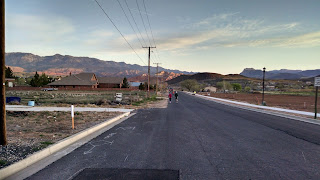 Around mile 6, I nearly wound up ruining my race.  I was too busy looking around and I didn't see a fist-sized rock in the middle of the rock.  I stepped on it and rolled my ankle.  It hurt!  I was like, oh shit, there goes my race.  Luckily, I was able to "walk it off" and 100 yards later it was forgotten -- but it could've been a lot worse.

After a quick jaunt through what appears to be a swanky neighborhood.  The houses are definitely upscale and look nice.  The hills are rolling and just as soon as you ascend one, you descend another.  The miles were going by pretty quick and I was always running with someone behind me or nearly in front of me.

Around mile 7 or so you get a massive decline.  You are also running along a busy road.  Most people were courteous and the area was coned off.  You also get to see some views of the Quail Creek Reservoir.  I was never worried about my safety here as there was plenty of shoulder room: 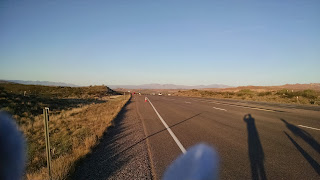 Around mile 9, you start heading onto the service road for the park.  Here is where the course gets challenging as well as more beautiful.

I was in the groove at this point and I wound up passing quite a few runners that had apparently started out too fast.  Around mile 11 or so I started working with another group of local runners -- about 7 women all dressed similarly.  I sort of felt like a lurker but they were good to work with.

Here are some pictures of the area leading to the reservoir: 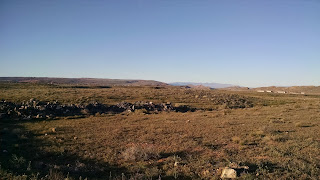 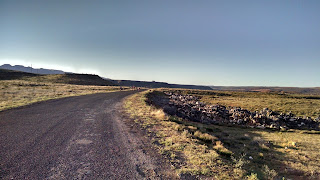 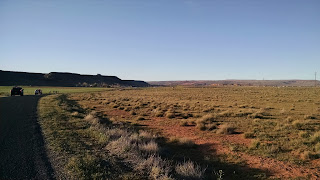 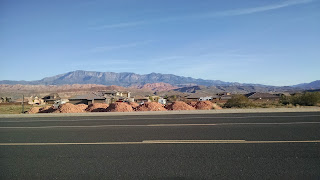 After running through the service road and a new subdivision, you are brought back out to the back highway of Hurricane.  At this point, the race becomes challenging.

1) There is no shade here.
2) All  you see is where you have to go and it is all UP.
3) At this point the race has thinned out, so largely you are running solo and the only person you can see may be half a mile ahead of you.

I hit the half way point at roughly 2:02, which is about what I wanted.  There was a decent crowd here and they were cooking bacon, which I never eat.

Around mile 14, you get to see some stunning scenery -- especially after cresting a hill you get some delicious views of the Sand Hollow Reservoir: 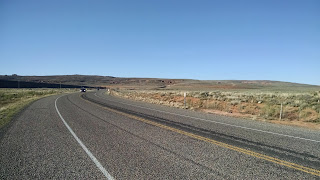 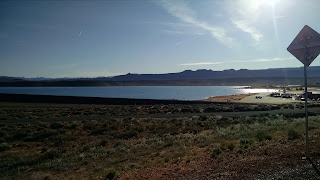 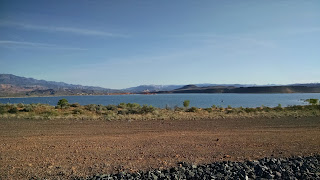 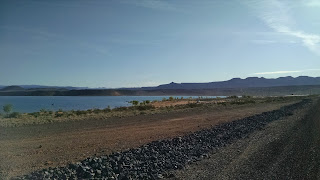 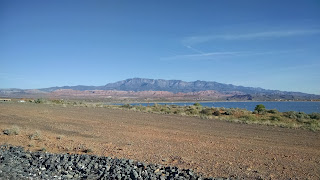 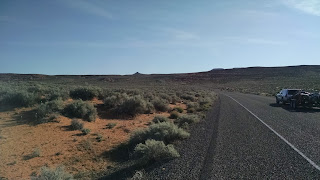 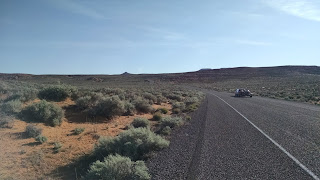 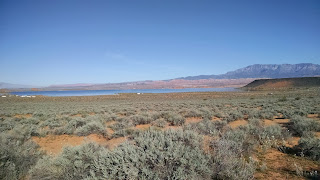 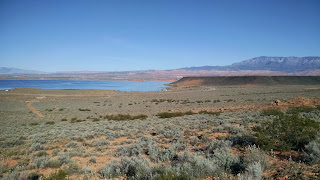 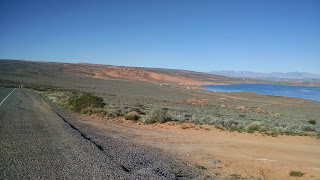 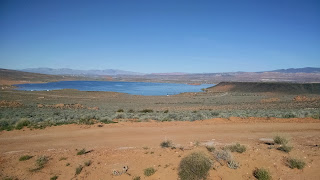 Finally after a relentless and almost monotonous climb, you reach the summit: 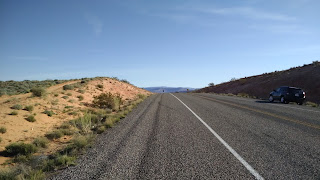 At this point my legs were dead.  However, I was still running and a lot of people had sort of checked out.  I passed by a number of runners who were walking.  Also, there were far and few runners -- so basically I was working solo.  It also gave me the opportunity to turn on my music from my phone.  I wasn't bogged down with any headphones so everyone got to listen to what I was listening to.  Luckily, any encounter I had was short lived and most people had their own head phones on (actually I started the music around mile 9).

I was counting down the number of quarter miles at this point.  I was semi-dehydrated and was gulping fluids at every aid station.  I had brought my own 28 ounce container which I had blown through and was filling with extra fluids I grabbed at the aid stations.  I had consumed the better part of 3 gels, which also helped.

Miles 20 - 24 are pretty much along farm roads.  I'd get encouragement from passing by cyclists, but the crowd support (there isn't much for this race) was totally absent here.  Again, no one was around and often times I worried I was still on the course except for the occasional aid station.


The final 5K is back in town and you are nearly following the route back to the civic center where the race began.  Again, there were very few people except in the last half mile or so to push you in. 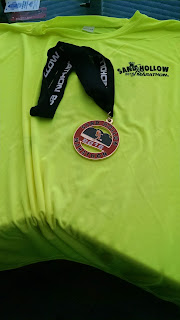 The finish line was well done and I got the much improved medal (over last year's).  I walked around a bit before returning to the community center.  To settle my stomach, which is always iffy after a marathon, I sucked down two root beers.  Man, they tasted good.

I kept walking around to keep the blood flow moving and to make sure I was okay.  Every now and then, I'd return to the community center for more food and drink.  They had some pizza as well as the typical finish line fare:  bananas, bagels, cookies, soda, chocolate milk, and fruit.

I wound up hanging around for over an hour socializing and checking out the park.  For finishing a marathon, I felt really good and wasn't on death's door. 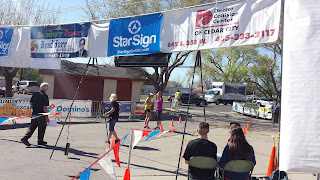 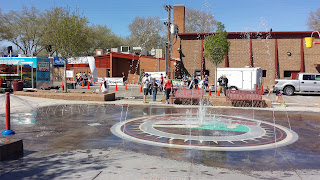 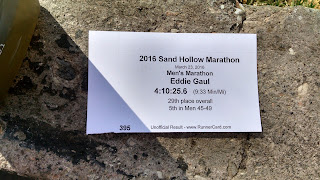 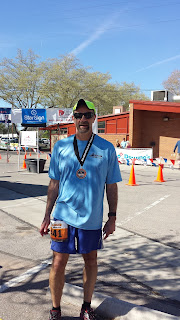 Overall I really liked this race.  It is a low key event with only about 150 runners and there wasn't a lot of stress involved.  Parking, packet pickup, pricing, etc, wasn't a hassle at all.  You can tell the race director really cares about putting on a quality race.

Aid stations were every two miles starting at mile 3.  There were ample bathrooms at the start and on the course (for a race this size).  In fact, I never had to wait a single time.  The community center also has flush toilets, so that was nice.

I like the improvements they made with the medal and the shirt is nice too.  I didn't take a photograph of the back of it, but instead of advertisements, it has their mascot on it.  The age group awards looked like nice plaques.  They even had massages at the end... all in all, for a small town event, it was well run.

I was pretty happy with my performance.  This course isn't easy.  It certainly isn't flat and the sun / temperature can get to you.  I was hoping to come in under 4:08, but there were some early miles that I should've taken a little faster and I think mentally I was beaten down from miles 20 - 24.  It is really difficult to keep focused and going when all you can think about is how much more you have to go, when will I see the next runner / aid station, and how hot you are.

The course was better marked this year too although I heard rumors a few runners got lost.  I suppose an occasional "You are on the right track" marking would've been good.  Mile markers were sometimes present (more often than not) and seemed to be fairly accurate with my Garmin.

I was sort of worried near the end whether I'd be able to find my way back.  Literally, I was running with no one from the second half on.  They had put arrows (that you really couldn't see) and used white chalk on the road.  There aren't that many turns and at the hazy intersections they had someone there, but for the most part, the course is pretty much under supervised.

Crowd support was weak throughout, but for a small town event like this, it doesn't really apply.  The cyclists gave encouragement and there was a nice celebration at the end of the race.  Aid stations were well stocked with enthusiastic volunteers that celebrated your arrival.

If my plans make it possible, I'd like to run this one again.  It is always nice to get out of town and see the southern part of the state.
Posted by Eddie Gaul at 2:40 PM