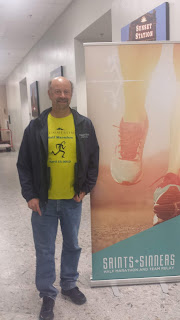 Last year, I did the Saints and Sinners half marathon and generally had a good experience.  It is in one of my favorite places to run: The Lake Mead Hoover Dam Train Trail.  I don't think I was going to do it this year on account it is a destination race for me and let's face it, I've done it before (as well as another race, the St Patrick's Day run) along the course.

But sometime around Christmas they had a flash sale and their semi-steep price turned into a good deal.  I think I squeaked in for around $60, which isn't too unreasonable for a race (for whatever reason Vegas-area races tend to be expensive).

So sometime around the new year, I got my ducks in a row, booked a hotel and got excited about the race. 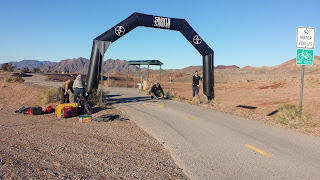 Well, the problem is I didn't get excited about the race.  A few days before the race, I got my annual cold.  This cold wasn't one of those blow your nose / whine in bed colds.  It was very mild but it did leave me out of breath easily and coughing like a 2-pack-a-day smoker.

To compound matters, I jumped a curb a few days before the race (while running of course) and pulled something in my groin area.  I was literally limping around 24 hours before the race: step with the left, drag with the right.  So I was taking anti-inflamatories and cold medicine. Not a good combination.

And finally, I had to deal with some emotional issues early in the week (a post forthcoming on that).

So to say the least, I did NOT feel like running -- at all.

I woke up Saturday morning and my groin had resolved itself -- miraculously.  I was coughing but I felt reasonable.  I figured I might as well run it.  The Saints and Sinners organizers have good medals and I paid for the race.  I knew it wasn't going to be pretty though, but sometimes miracles do happen. and the running Gods smile down upon you. 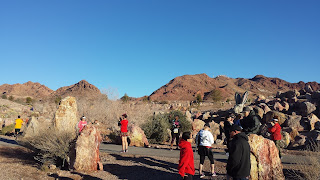 I got dropped off at the race and I milled about for 40 minutes before the race talking to people and psyching myself out that I could actually run 13 miles while feeling like crap. 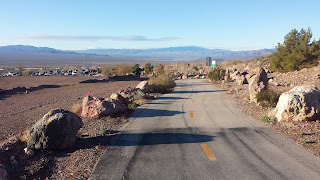 The race started a few minutes late (it took a while for everyone to make their way to the starting line from the runner assembly area).  And soon we were off.

The first quarter or half mile I was hemmed in.  There were a ton of runners and we were on a paved standard issue bike trail (about 7 feet wide).  Most people had lined up according to speed but there were some that clearly hadn't gotten the message.  It wasn't the end of the world... .I was sort of feeling myself out and after a few initial twinges, my groin behaved itself.  I told myself that if I felt like crap early on, I could just walk off the course and call for a ride or hoof it back to the hotel.

The first 3 miles are a delicious downhill.  I wasn't working too hard and I let gravity pull me down.  My breathing was controlled and believe it or not, I felt okay.  My head, although was cloudy and humming from a week's worth of cold medicine and my legs just felt tired despite having nearly 4 days of no running.

The air temperature was warming up too.  While it never got over 55 that day, it did feel warm and it seemed like I was working up a good sweat.  I looked around and a lot of runners were wearing winter clothing -- they would pay for that later in the race.  I was in short-sleeves, shorts and throw away gloves, which I pocketed a mile or two into the race.

The first reality check is around mile 4.  There is a decent hill and suddenly you have to actually "run" instead of coast.  It was at this point I knew it was going to be a rough race for me.  While the hill is only about 40 feet, it definitely took its toll.

There is an aid station at the top and luckily the run goes downhill for another two miles.  The descent at this point is much more mild, and I was able to return to a normal half marathon pace.

The bike trail zigs and zags its way down the main drag of Boulder City and you are treated to some awesome views of Lake Mead.  Traffic was well maintained and while the course was steep at times, you were never running out of control.

About the 10K, when the downhill stopped, I knew it was going to be a grueling run to the finish.  I just felt really off, demoralized and out of energy.  I tried to cheer myself up by looking at the views, but simply put, I didn't feel like running.

Also at this point you change from the bike trail to the dirt "rail trail".  The footing is easy and while technically a trail, it is as smooth as can be.  It is also a little hard to get any traction and get a bounce from the rebound, so my pace suffered here. 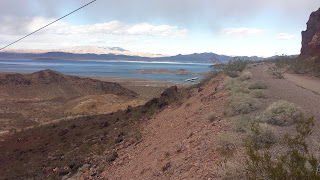 You are still treated to some stunning views of Lake Mead and the surrounding cliffs.  You also get to run through the tunnels, although unlike last year's race, you only got to run though two of them.  The park service decided that one of the tunnels needed repairs and closed it to public access.

I couldn't wait until the turn around, which happened around mile 8.5.  There were still plenty of people to run with so I was never entirely alone during the race.  Although it was humbling to be passed as my pace suffered with each mile.

I kept telling myself, I was finally in the homestretch.  My legs just felt like lead and I really didn't have anything going for me.  While my Garmin was chirping at 9:30+ miles I felt like I was running 10-11 minute miles.

After getting off the trail, I could see the finish line -- way in the distance.  I still had a solid 4 miles to go, but at least the next two were a gentle, paved downhill as we resumed running on the bike trail.

The final mile I was mad at myself and I was going over in my mind how much I hated running.  I don't really, but that is the way I felt as I shambled along.  I just had nothing left.

Due to the tunnel closure we had to run past the finish line for about .53 of a mile (downhill) and then turn around and make our way back to the top.  It was so frustrating to hear the announcer saying everyone's name and the finish line music.  There used to be a day when I would've been long done by now.  To be honest, I longed to just cut the course.

I pretty much dragged myself back and made the left hand turn towards the finish line.  Around mile 13, I dug deep and made a bit of a sprint to the finish -- you know -- so it would look like I wasn't dying when I crossed.

You get to cross under one of two finish lines, a white saint banner or a red sinner banner.  Of course, for the second year in a row, this heathen ran through the sinner banner. 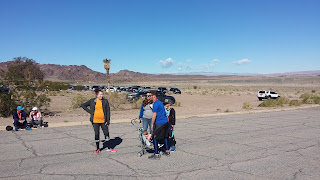 
After the race I walked off the post race nausea and looked around for anyone I knew.  Being I was nearly 400 miles from home, I didn't.  But I grabbed some water / gatorade.  I couldn't stomach any food but they had fruit, cookies and typical post race food.

On some level I was happy that I had "survived" the race.  Shari was begging me not to run it and in all honesty, I sort of excited my expectations -- I sort of felt like I was going to be doing a fair amount of walking. 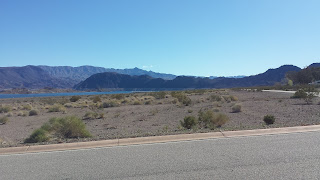 The original plan was for me to run back up to the Lake Mead Park's pay entrance and Shari was going to pick me up.  That was about a mile run / walk.  I didn't have much left and my motivation to run was nil.  Luckily they did have a shuttle that ferried people back to the starting line (where 99% of the people parked their cars).

I hovered near the shuttle until it was nearly full and grabbed one of the last seats. 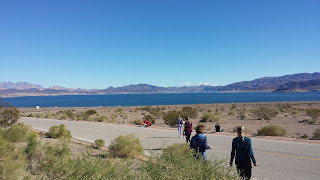 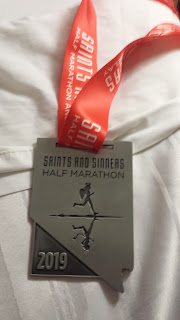 The finisher's medal is a gem.  It is heavy duty and large.  Plus it is in the shape of my favorite state.  This one will likely go down as one of my favorites.

The shirt's colors were kind of a mish-mash (I am wearing it in the second photo).  It is hard to read but overall a standard issue tech shirt.  I will definitely wear it.

I like the course but disliked it this year on account of the grueling half mile out and back at the end.  This wasn't the race organizer's fault by any means but it was my least favorite part of the course.

The mile markers seemed to be off a bit at the start of the race and about half way through started to sync with my Garmin.  Not the end of the world though.  The aid stations were properly manned with enthusiastic volunteers.  I think there were more aid stations than advertised, so that is always a plus.

This was definitely not the race I wanted to have (again no fault to the organizers).  When I registered for this race I was going to use it to really get a decent time.  The course is fast, especially with the elevation profile.  I think given the conditions and motivation to run, I could've done a LOT better here.  But with all kinds of variables stacked against me, I got the expected outcome.  And worst of all, I was significantly slower than last year.

Will I race this next year?  Perhaps.  I like the race a lot and especially the course.  If they send out another special offer to save I will likely do it again. 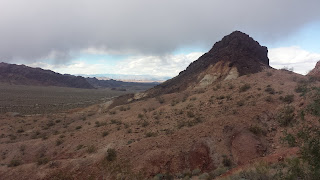