This Month in Running - February

Well, I'll first start off by saying February was a pretty crappy month.  It started off okay but my training really took a nose dive after the South Davis Recreation Center 5K.

I normally don't mind winter running and while we had some rough weather, it really wasn't that bad.  In fact, I don't think there was a day this winter where I couldn't run or that the bike trail wasn't in good shape. 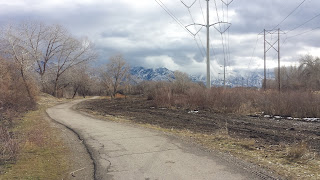 My problems started around February 10th when I discovered the cat I was feeding died.  A few days later I got a nasty cold, which sort of morphed into bronchitis and then some sort of "para flu".  Running suddenly became a lot harder -- especially when you can't really get a full breath of air or if you stop running you cough like an asthmatic.  Here I am typing this in on March 2nd and I am still not 100%.

So it isn't too surprising that I only got about 130 miles in for the month.

Also as the month crept on, I get less and less quality runs in.  Most just became maintenance runs.

Despite the horrendous news that the cat I had been died, I continue to feed another feral cat -- a little black one.  I don't see it very often but I do drop food for it and once in a while I find it sunning itself in the field, waiting (presumably) for me.

Since we were all set to adopt my other cat, we did wind up taking in a cat from the local pet shelter.  We took in a spunky, long-haired Tabby.  She is a cutey but hard to pin down.  Too much energy for a 2 year old: 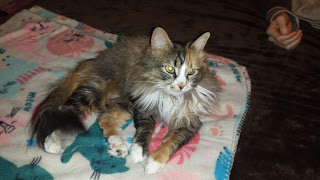 Like Oreana, my other cat, we named her after a Nevada town: Fallon.

The race season is under way.  I did pass on the March Madness Half Marathon that was scheduled for 3/2.  I dropped down to the 10 KM and decided at the last minute that I wasn't even going to be able to run that.  I hate to not run a race I registered for, but I probably did myself a favor.

Hopefully I am 100% for the Sand Hollow Half.