Last year I really wanted to do the Sand Hollow Marathon.  Due to some unforeseen circumstances, I couldn't do it.  When this year rolled around and I had a few extra bucks in the bank and I was sufficiently trained, I opted to head down to Southern Utah for the weekend and knock this race out.

My primary motivation was that it would give me a chance to explore Southern Utah (namely Hurricane / St George) and we'd be within shouting distance of Mesquite Nevada so I could get my gambling fix in.

So I waited until the last minute, registered for the race and booked a hotel in St George -- about 30 minutes away from Hurricane.

Either way, this area is basically the gateway to a TON of state and national parks and the natural beauty out there is unrivaled.  So besides getting in a race and a bit of gambling, I could do some sightseeing.

We rolled into town around 8pm after a quick dinner in Cedar City at IHOP.  I got fed pretty good there and carb'd up on some pancakes.  We stayed at the Chalet Motel in St George -- a clean and close to the freeway motel.  The room was absolutely huge and sported a full refrigerator and stove.

The bed I think was supposed to be a queen but it looked more like a full.  There was a noisy room next door and for some reason I was boiling HOT all night despite the AC cranked up to 11 (despite Shari's protestations) .  I probably got about 3 hours of sleep at best.  I was worried my phone's alarm wasn't going to go off and I was shooting to get up around 4:30AM.
When the alarm did go off, I drank a can of beet juice and ate Wheaties by the handful.  I also drank an iced tea.  I used the toilet a few times and took off at 5:30 and rolled into Hurricane by 6AM (the race started at 7AM).

I think I was the first one there and the community center wasn't hard to find.  I got my shirt and was back in my car listening to the radio until the race start (of course using the bathroom a few more times). 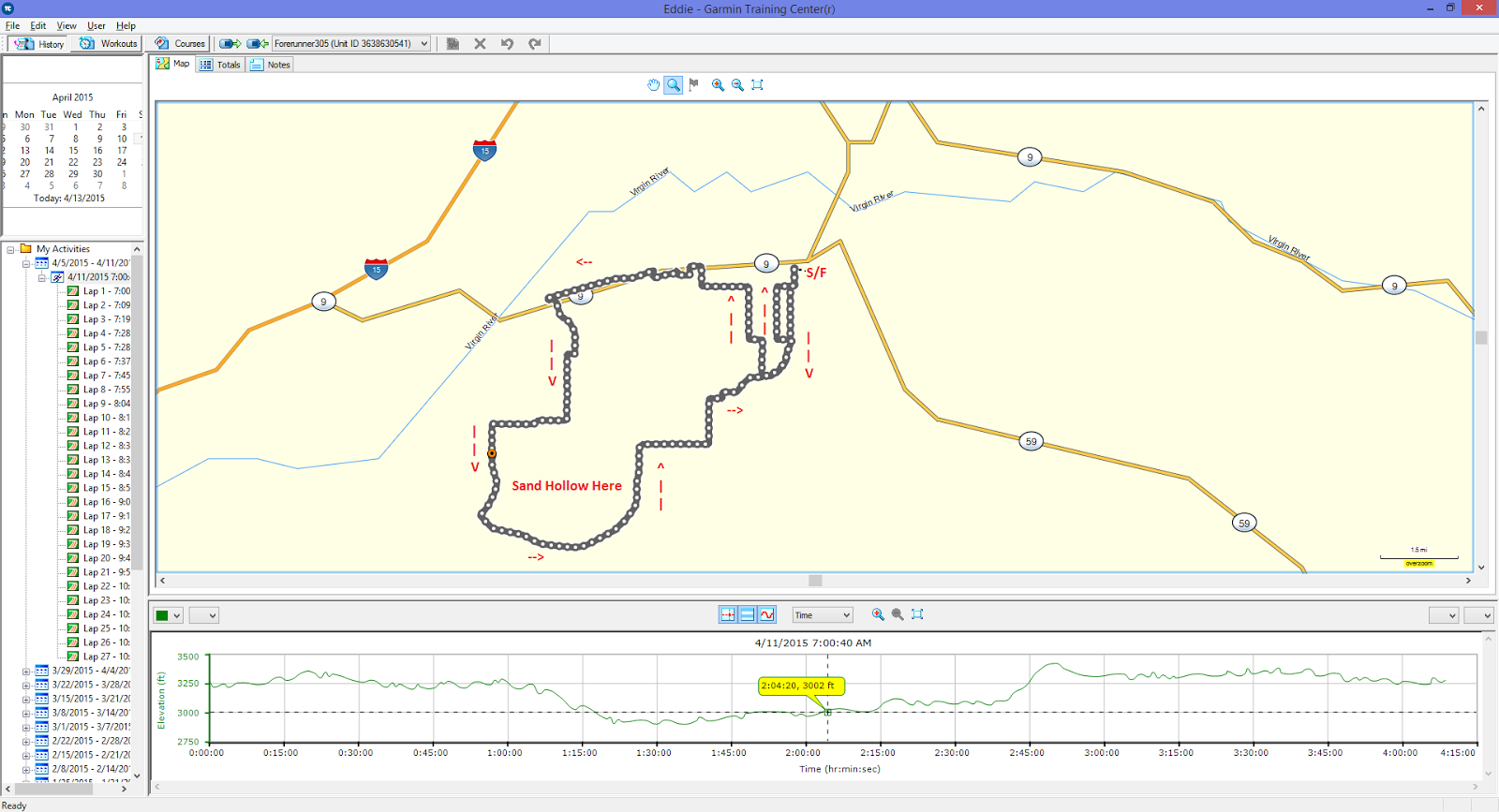 The race started at 7AM and it seemed like everyone was flying by me at the start.  Am I that slow?  This race only had a marathon so I wasn't getting rooked by anyone running less than a 26.2 mile race.

*Please note that most of the pictures of the course were taken *while* running.  Sometimes I got a good picture, other times not so much. 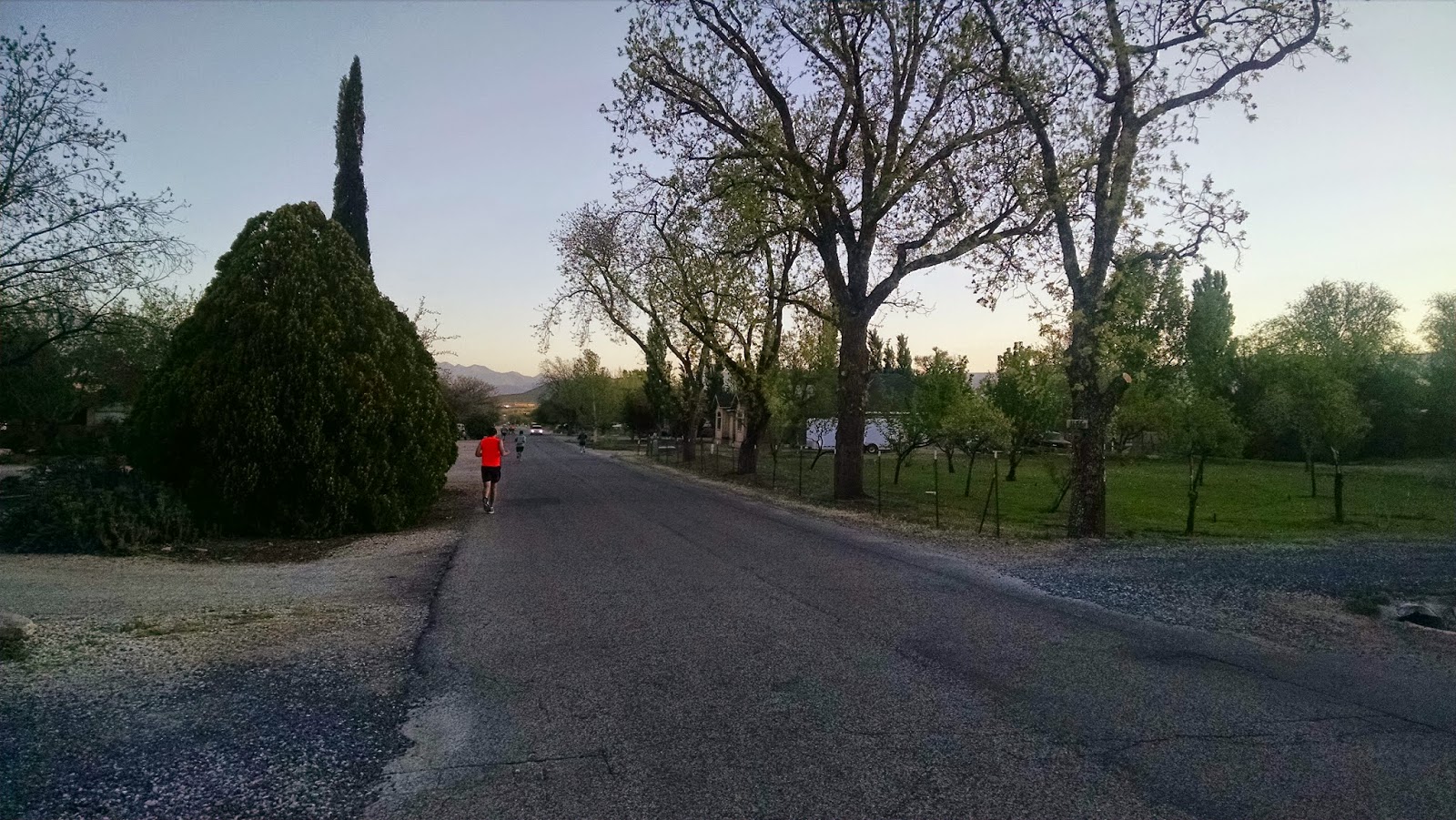 The first third of the race is in a residential / farm area of Hurricane.  I really enjoyed this stretch of the course as I was still feeling really good and the air was cool.  I wound up jettisoning my gloves at mile 7 (I had some cheap gardening gloves).  Most of the houses we ran by were older and some could almost be considered working ranches.  It wasn't unusual to see some farm animals. 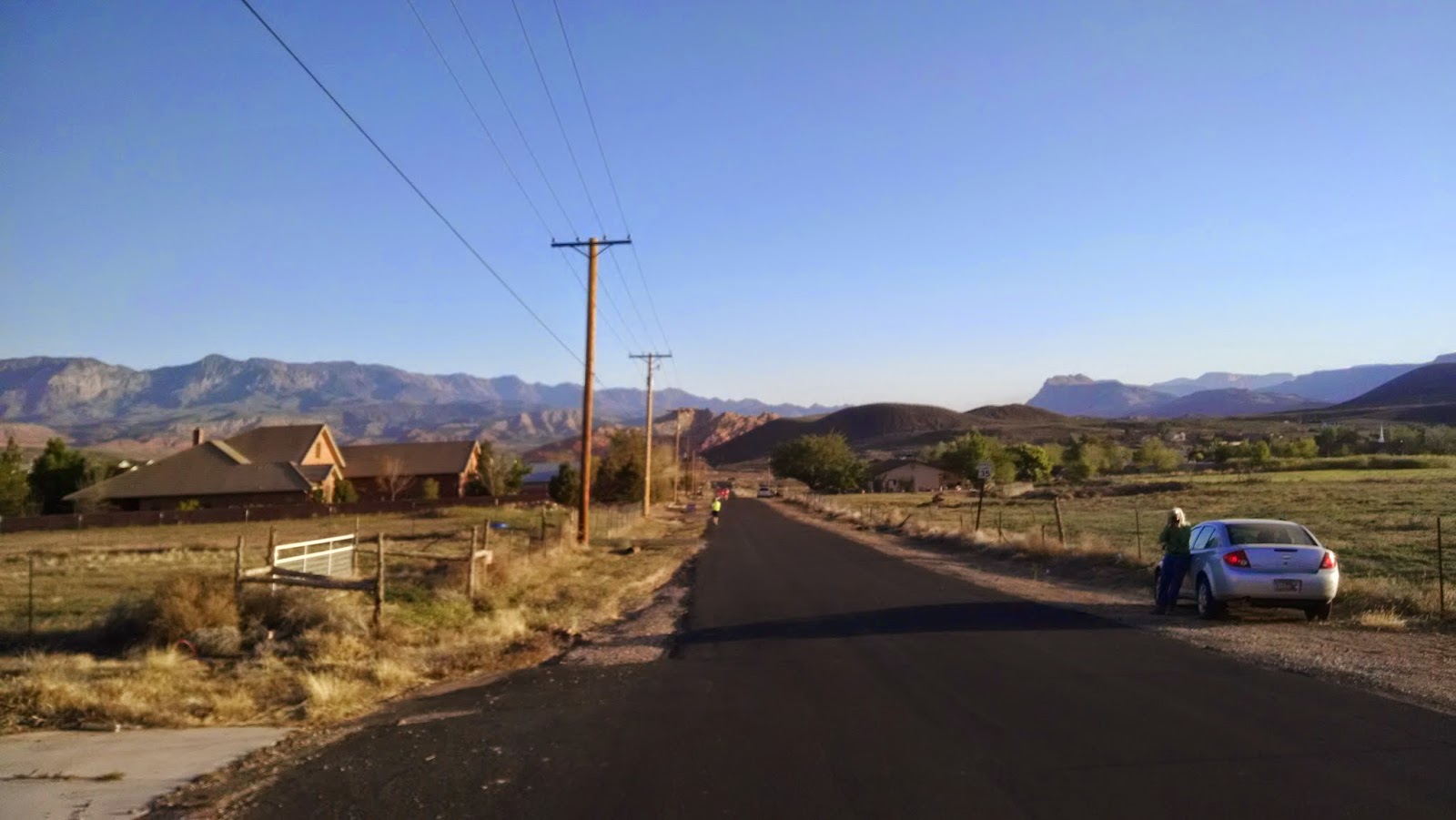 Around mile 9 or so I got a nice downhill.  We were running along the side of State Highway 9 and there were cars buzzing by at 55mph.  They were very gracious though and I didn't have any problems or close calls.  We had plenty of space to run. 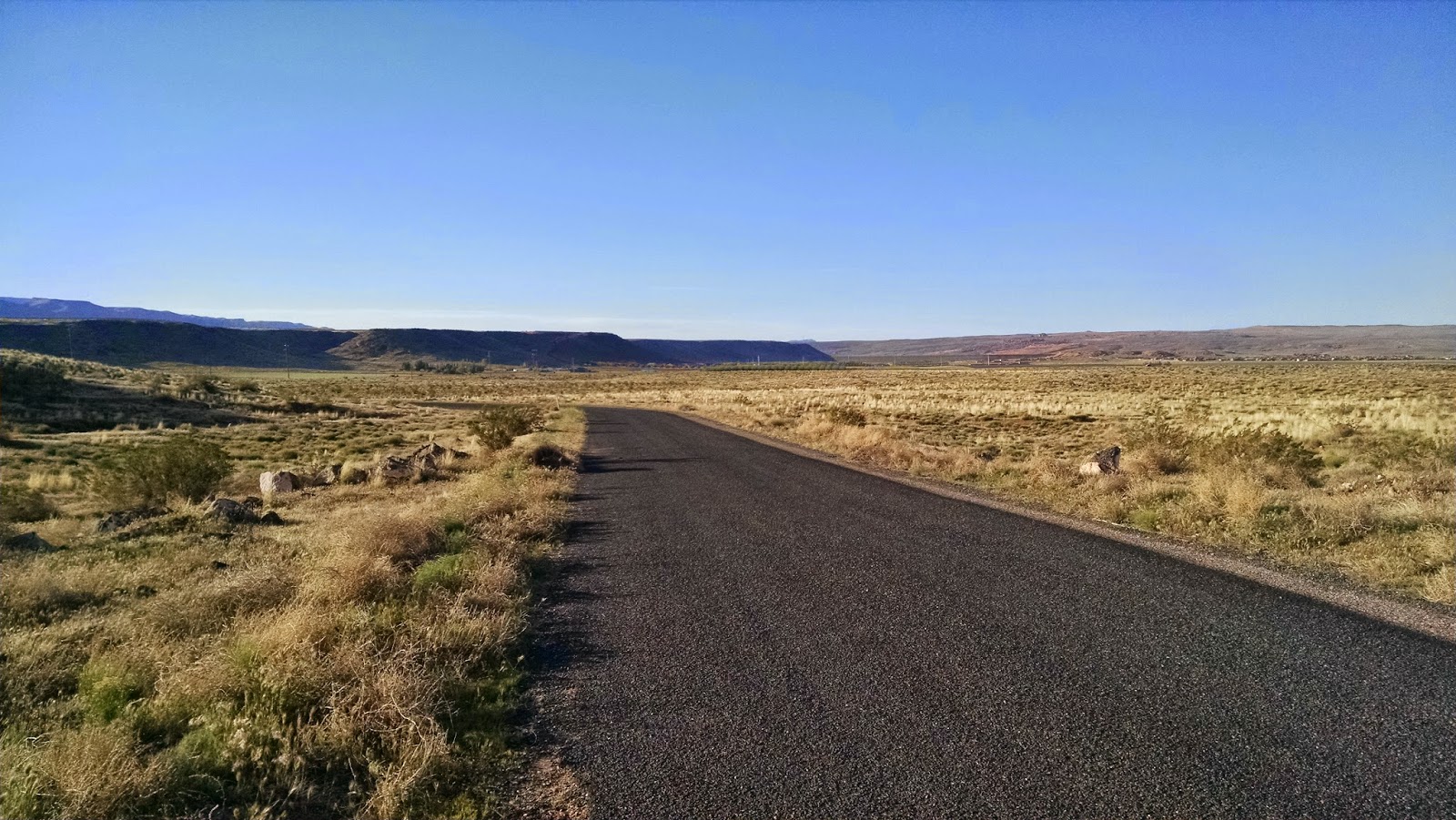 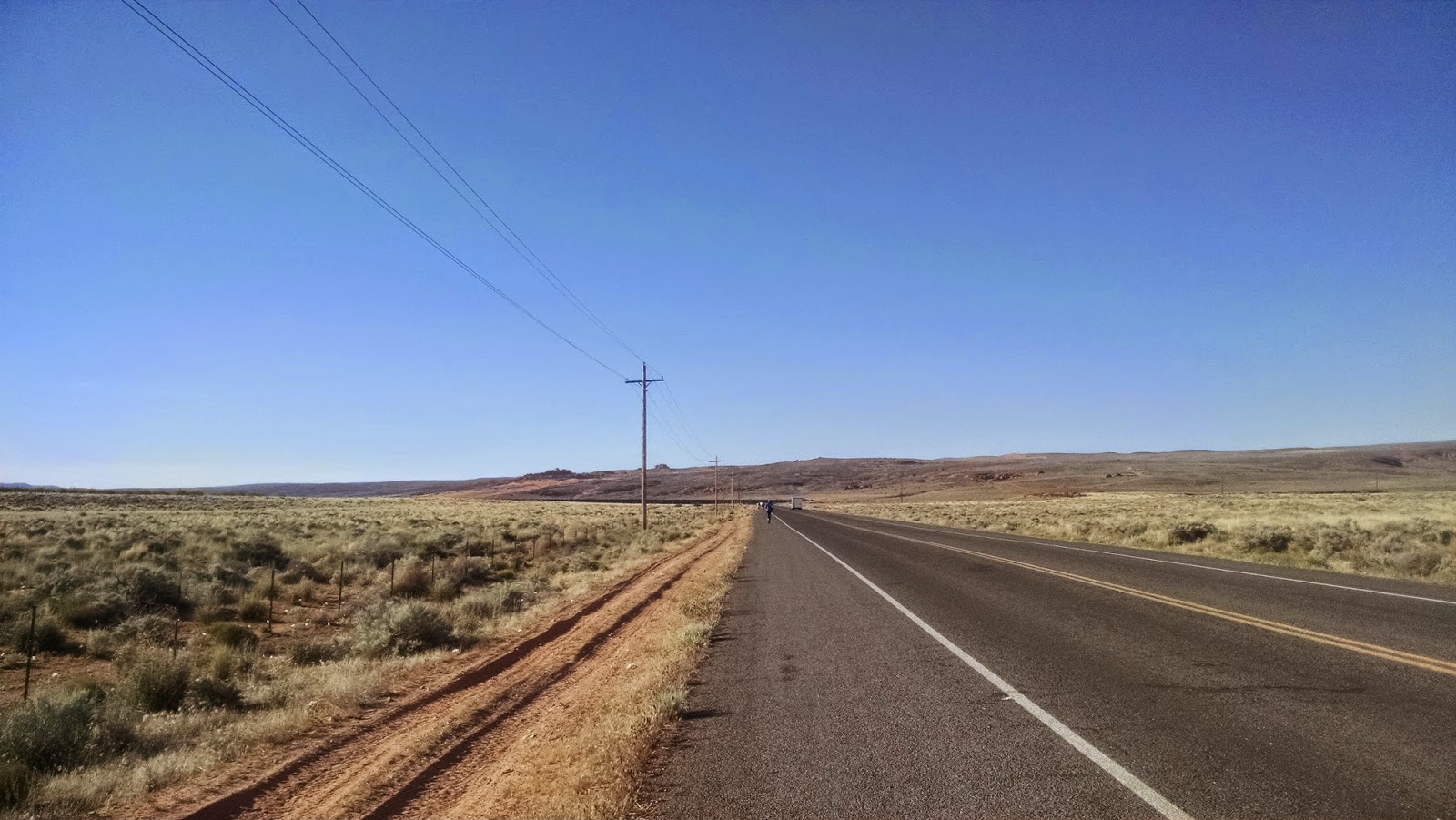 After running on the highway for about 2 miles we entered the Sand Hollow State Park area.  The entrance wasn't terribly exciting and parts of it was run through a budding subdivision.  There wasn't much to work with here and me and another guy were trading positions every 5 minutes.  He'd get ahead of me and then stop to drink and I'd pass him and then he'd catch up.  I lost him around mile 15 though.  I also began to feel some of the heat from the sun and I hadn't worn any sunblock.

Finally after a yucky short but steep hill I got my first glimpses of the Sand Hollow State Park.  This is a local beach / dune buggy place where people can swim and play in the sand.  Even at this early in the morning there was a line-up of cars waiting to get in.  I snapped a bunch of pictures of the Sand Hollows: 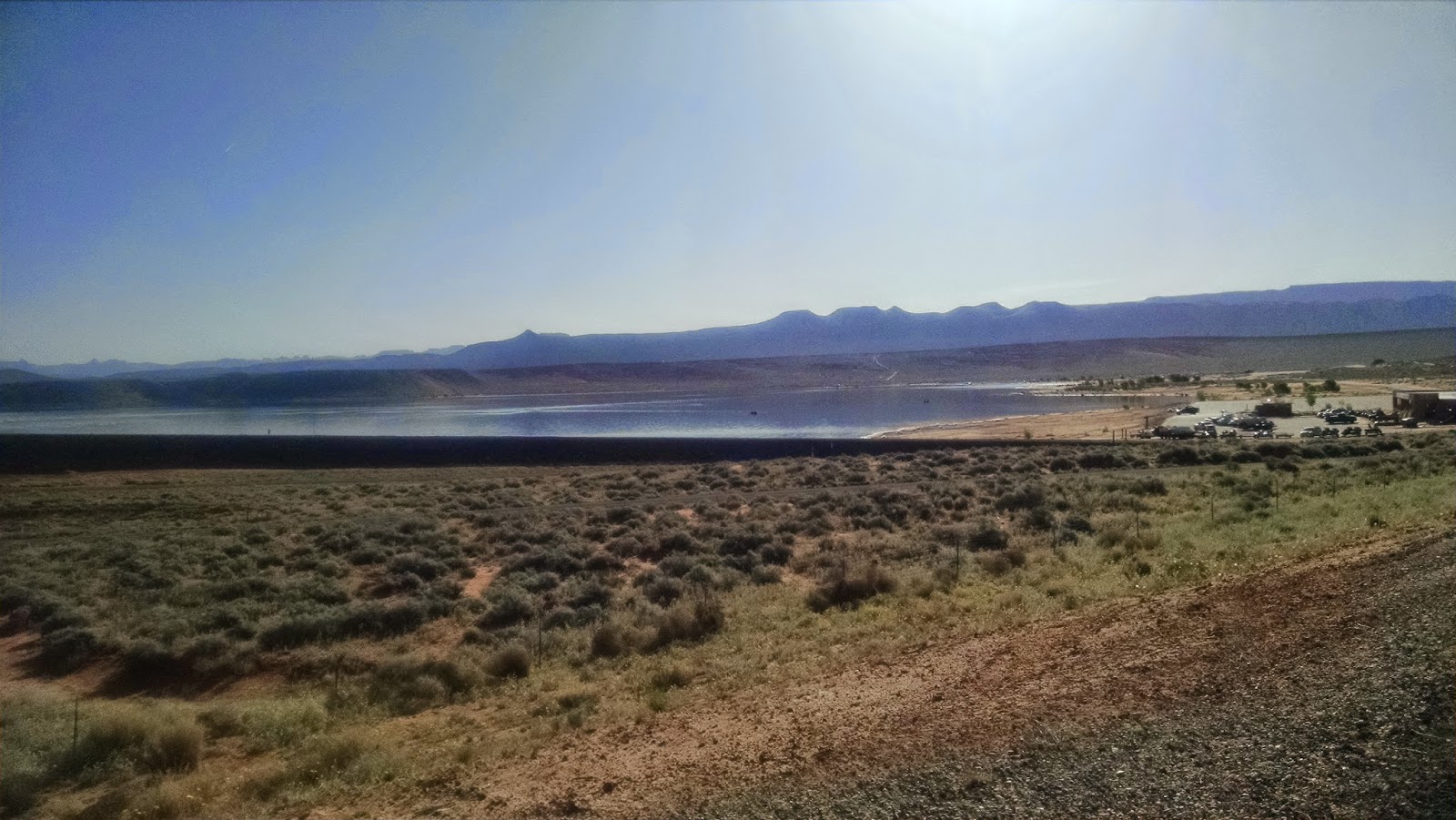 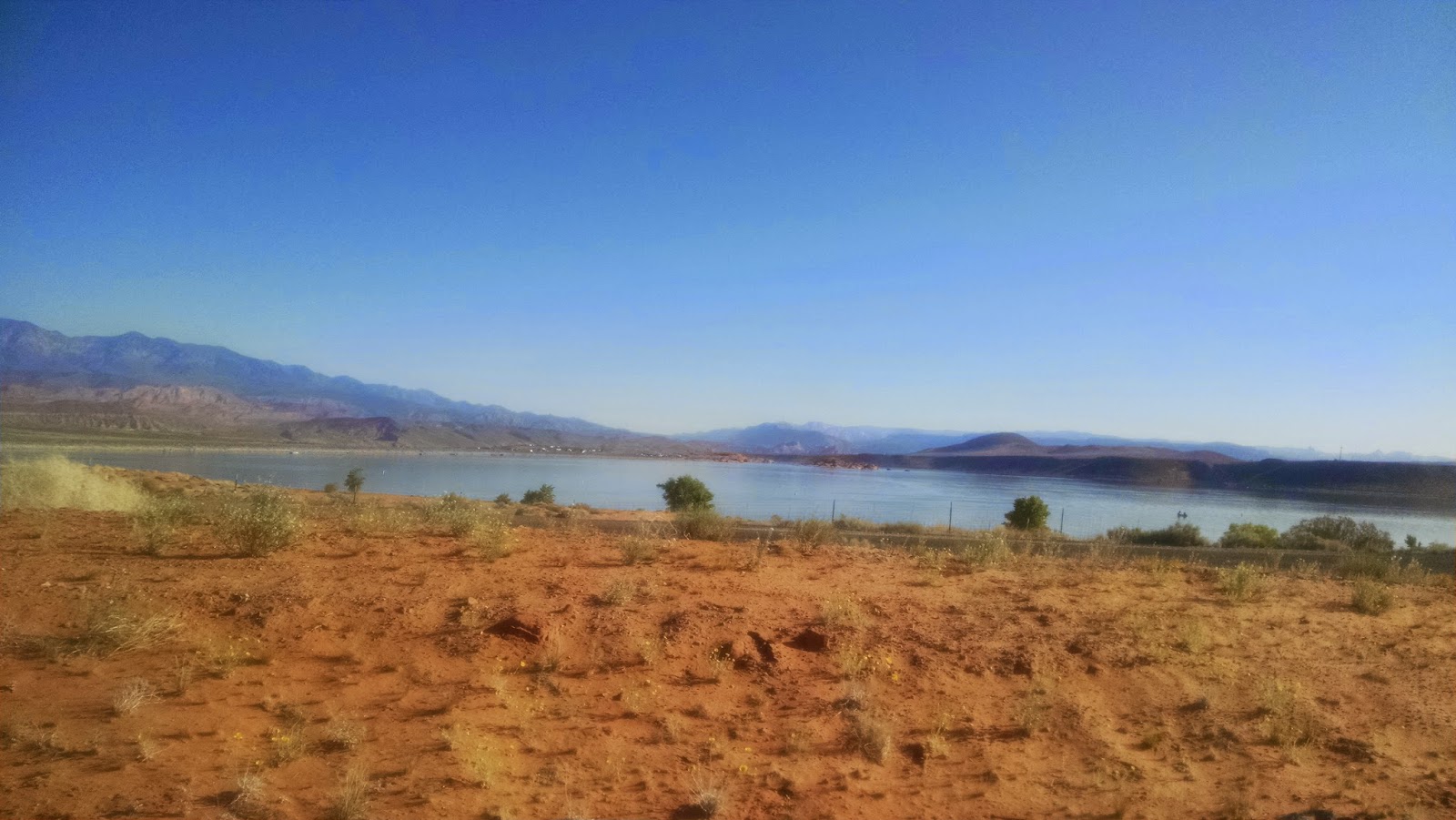 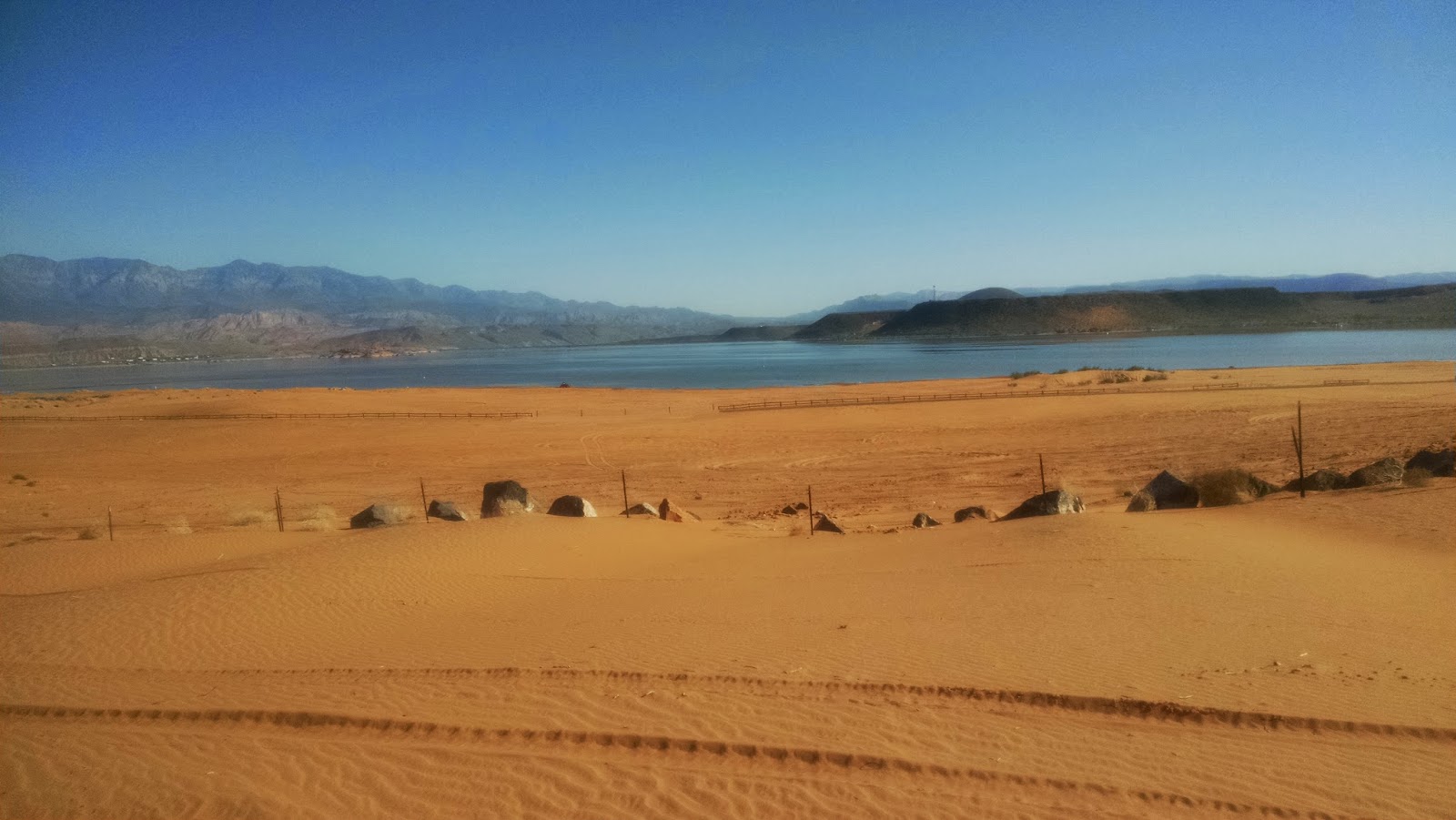 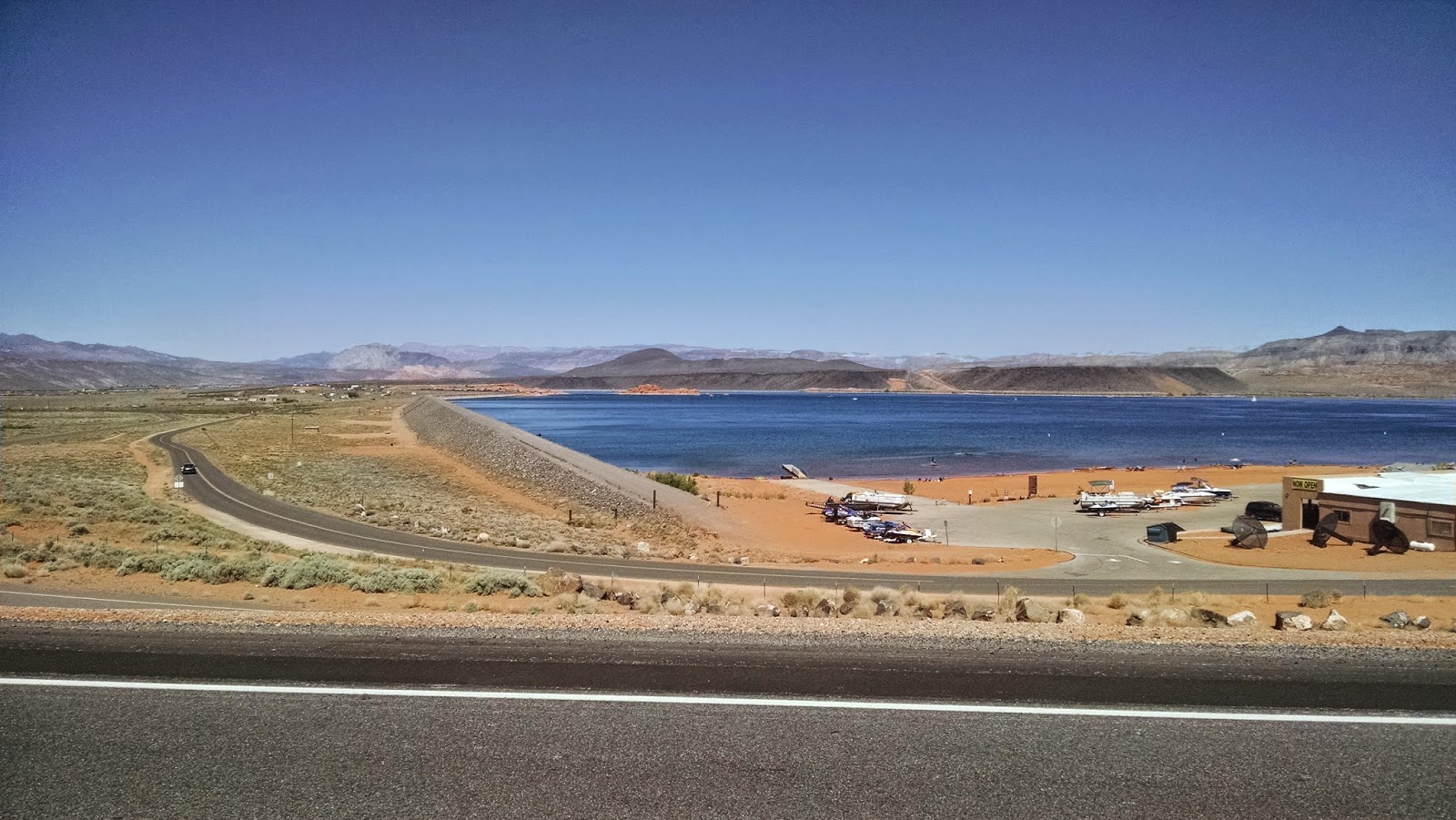 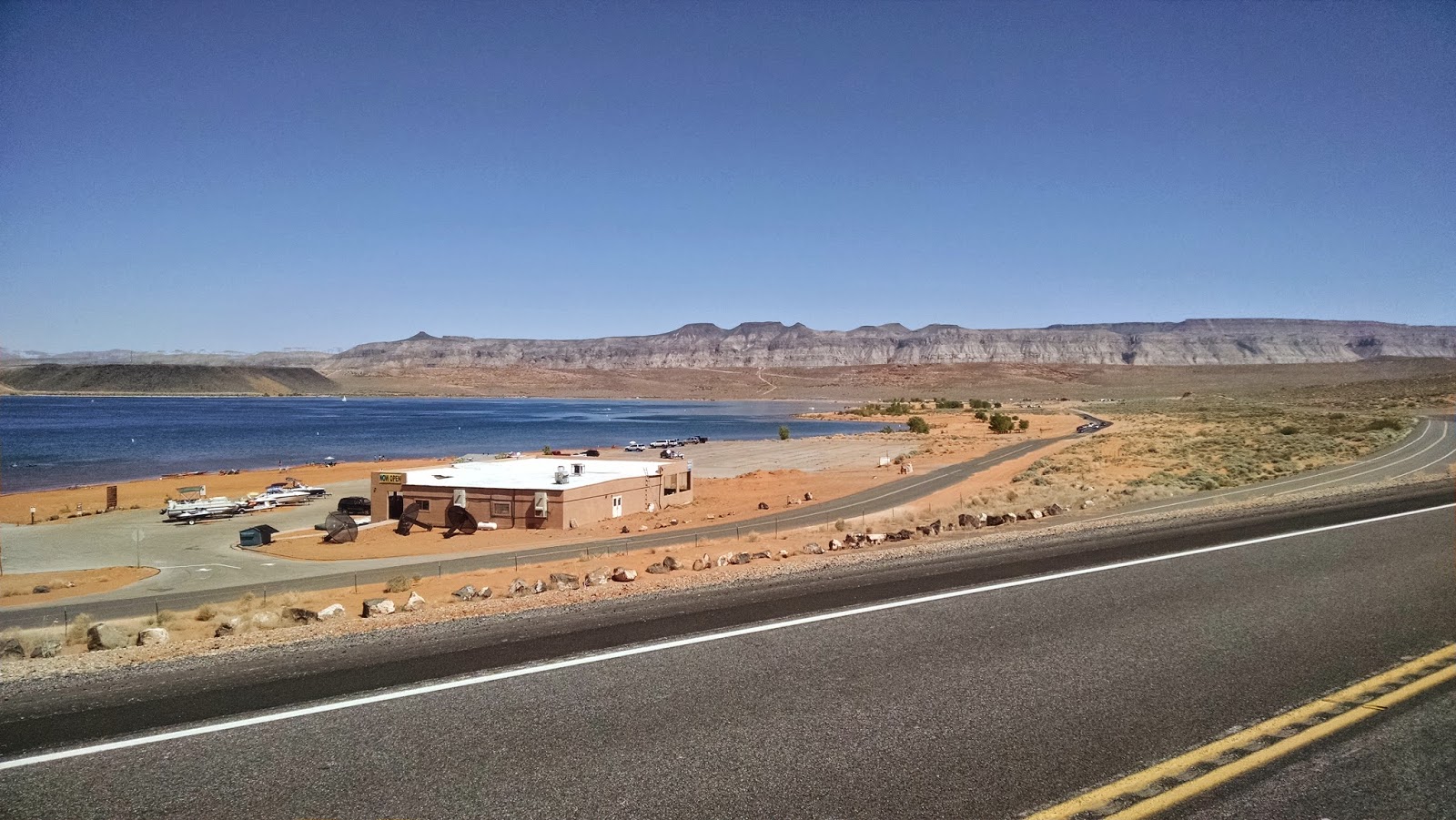 After getting by the Sand Hollows I ran up the mother of all hills.  I saw several runners really struggling up this beast.  I didn't get a really good picture of it but you can see it here if you look at the left on this picture: 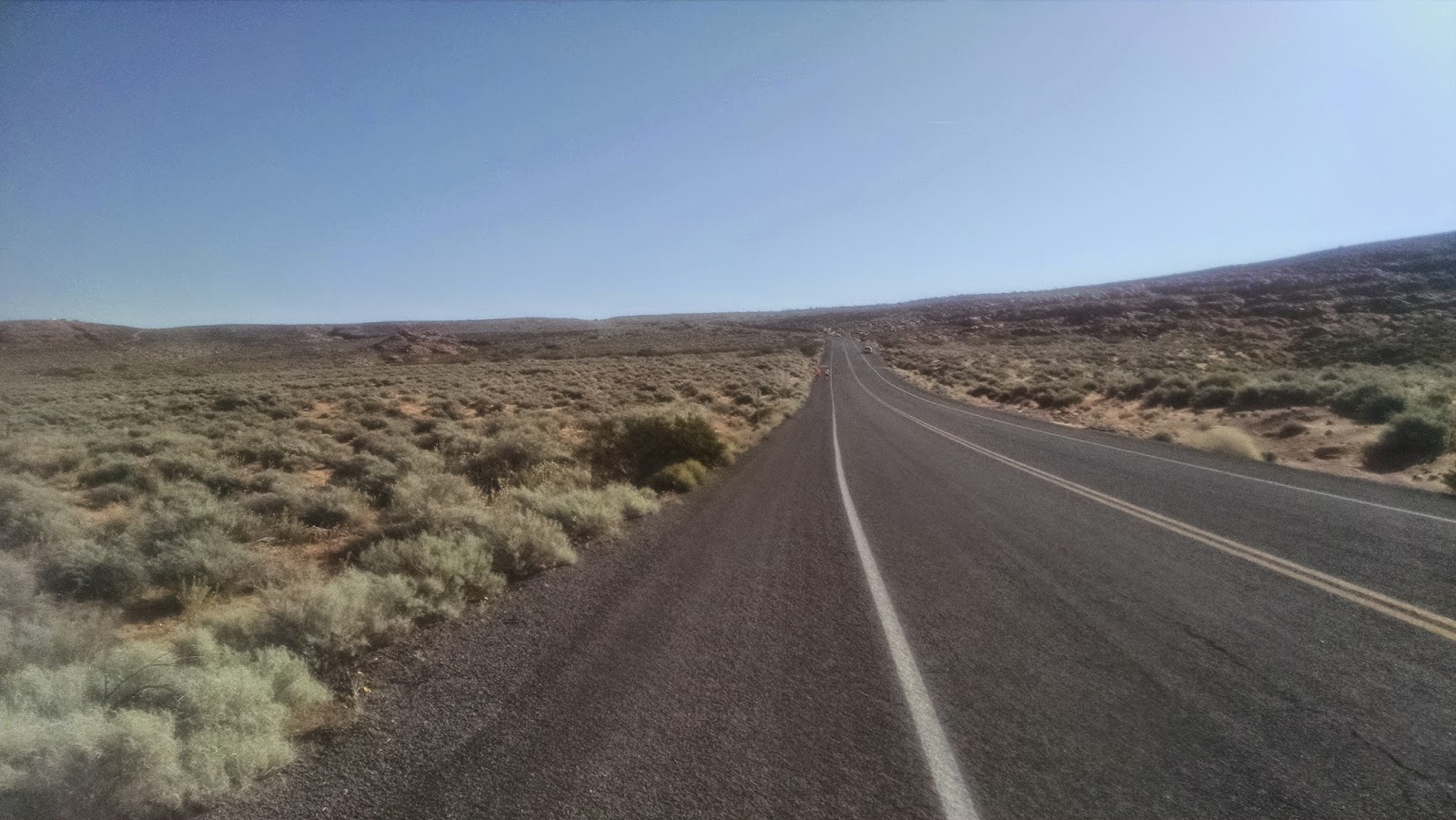 The final 6 - 7 miles were kind of a death march to me.  I did get a bit of a second wind after laboring around mile 13 for a few miles, but I was dripping sweat and I could feel myself getting burned by the sun.  I was also hunched over and I could feel my neck and shoulders getting tired.

I tried to focus on catching a young man in front of me and almost had him in my grasps before he too got a second wind and quickly pulled ahead of me.

The last fourth of the race was mostly farm country and we even retraced some of the initial start.  It was a little confusing in the final 2 miles as I wasn't running with anyone and you really had to watch for the chalk on the ground.  I think more than one person wound up running the start over instead of doing the extra half mile or so. 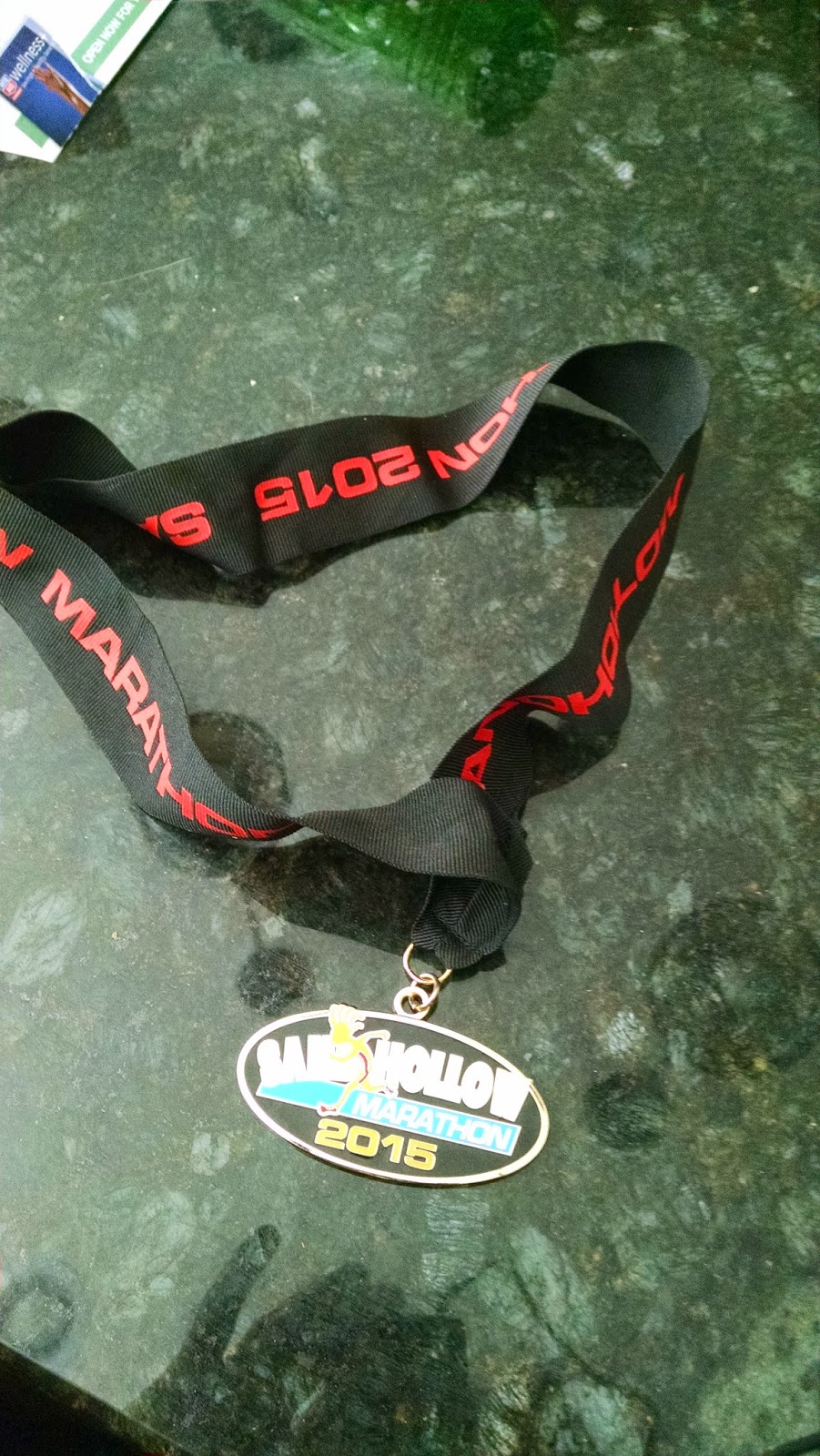 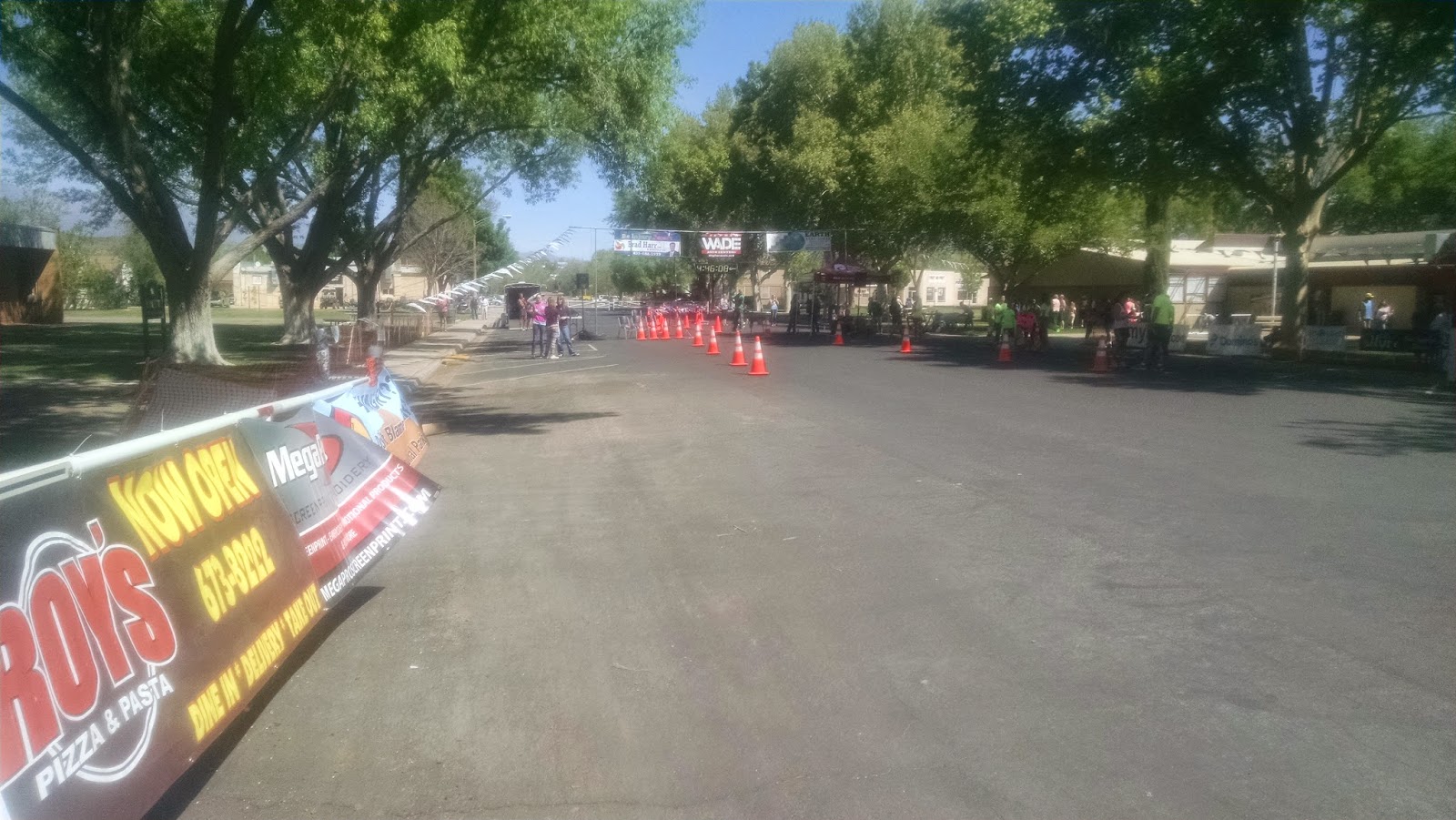 I wound up crossing the finish line in 4:08.  I wasn't thrilled with my time but given the challenging nature of the course and the heat, I was reasonably good with it.

I wound up getting a few sodas to drink and had a stale, salty bagel.  I wound up hanging around for about 40 minutes talking to people.  The general consensus was that the course was short.  Most people I talked to had their Garmin report they had run about 25.9 to 26 miles.  I would've eaten a bit more but my teeth were shot from the acidic Gatorade.

Despite running nearly 26 miles, I felt really good.  Usually I am in utter agony after a marathon, but this time I was able to walk around and socialize with a ton of people.

I had also picked up a surrogate "family" along the way.  The crowd support was pretty limited but it seems like a mother / daughter team was rooting for their husband and the husband appeared to be a bit behind me.  They would drive to each of the locations and wait for him.  While waiting they would cheer for people.  Since it was a small marathon, they wound up giving me a lot of encouragement and I think I saw them no less than 5 times.  I personally thanked them at the end.

In general, people were super friendly and I easily struck up half a dozen conversations with folks.  Unfortunately there was no age group awards (my initial results card said I had placed in my age group).


I really enjoyed this marathon.  There was a bathroom (or two) at each of the aid stations and the aid stations were staged exactly 2 miles apart, starting at mile 3.  They offered giant portions of Gatorade or cold water.  Some had gels or food as well.  Unfortunately I wound up inhaling one of the cups of Gatorade and my sinuses haven't been the same since.

There were some dull sections on the course, but I definitely enjoyed the location.  I got to see some of the outskirts of the mountains that line Zions National Park (just the absolute fringes) and of course check out the Sand Hollow State Park.

There wasn't a lick of shade on the course, so dress appropriately.  I was smart and dressed in light colors -- in the past I would've worn black and regretted it.  Course support was great and the volunteers were super enthusiastic.  Post race food consisted of a TON of sodas, chocolate milk, sports drink, fruit, cookies, pizza, and chips.

The t-shirt was kind of ho-hum.  I was hoping for a cool design on it or something, but it simply says "2015 Sand Hollow Marathon" in tiny letters over the heart.  The medal is cool and for $85, I figured I got my money's worth as far as a running event. 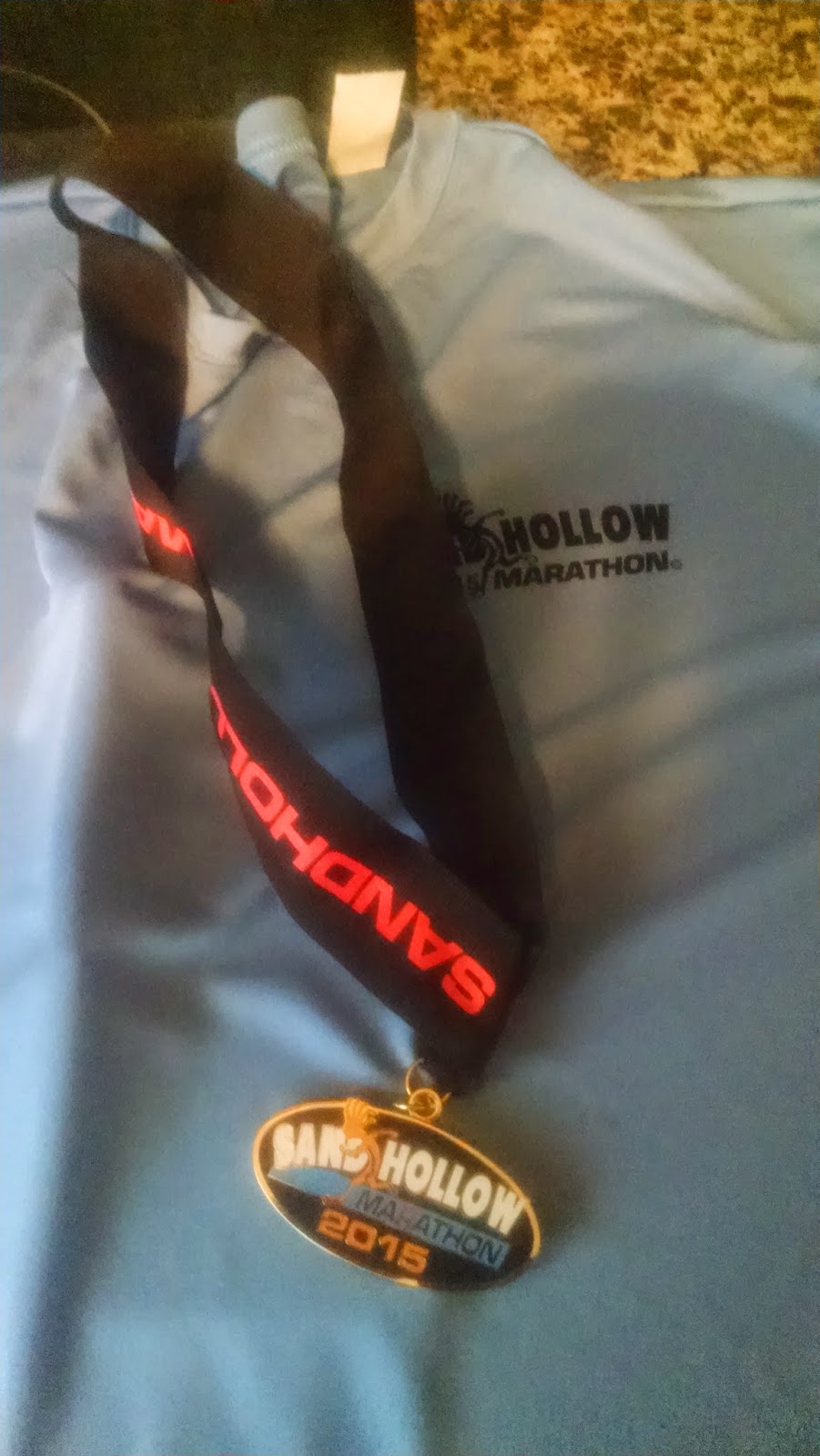 The course definitely needs to be corrected as far as the distance goes.  In my opinion it was short.  Also the mile markers were off.  For instance, when I crossed mile marker 5, my Garmin read 4.91.  It was consistently like that throughout the race.

If you are looking to do a marathon and need Utah to knock off your state's list, by all means do this.  There is a ton of things to do after the race in terms of state and national parks.  You could easily make this a super long weekend and see and do a ton of things.
Posted by Eddie Gaul at 6:19 PM