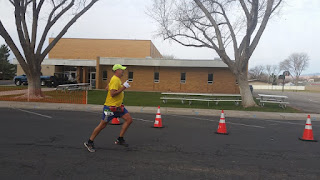 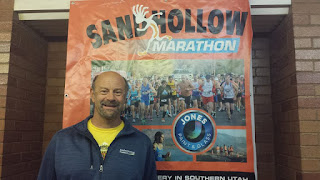 
I've been itching to do another destination road race.  One fairly close race is doing the Sand Hollow Marathon down in Hurricane.  Last year, I believe, they introduced a half marathon and this year they again offered not one but TWO half marathons.

Hurricane is a fairly small, rural town that most people drive through on their way to Zions National Park.  It is also home to Fast Cory.  However, there is a lot of cool things to do here and it is fairly scenic.  I love visiting here.

The first half did half of the marathon course, which includes a long hill.  That one you get to see the Sand Hollow Reservoir, which is a reservoir just on the outskirts of Hurricane.

The half I did, the "Fast and Flat Half" follows the other two races for the first 5 miles before splitting off to another section of town.  Having run the full marathon twice and having seen that part of the course, I opted to run the new course. 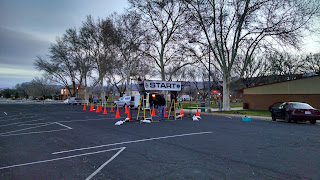 
I rolled into town on Friday night.  I was there early enough and picked up my race packet and met the race director (again).  Nicest guy and he really cares about his race.

I was staying at the Wynngate in Hurricane (highly recommended!) and I wound up sleeping pretty well. I woke up 2 hours before the race, ate and took care of my bathroom needs before making the 15 minute walk to the starting line.

I wound up hanging around for all of about 30 minutes socializing with the other runners. We had access to the local recreation center facilities, so it was dry, warm and with clean / flush toilets.  The race started exactly at 7 AM and off we went.

The first few miles of the race are flat and fast.  The race is also fairly small -- I was running with the full marathoners and my "Fast and Flat" group.  You are basically running down residential streets and making your way to the south side of town where Molly's Nipple is located.

I recognized some of the course from the marathon but he has since changed the race route (it used to do a big loop, now it is an out and back). 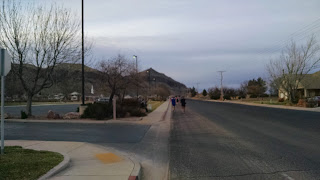 I was running about 8:40 minute miles, which seems to be my standard pace these days for a half.  However, today it felt harder.  I began to wonder if I was going to crash and burn.

Around mile 4 we were into farm country and I could see horses and smell manure.  In all honesty it was a beautiful run.

The race is held on city streets and many of the busy intersections had crossing guards.  It was still early in the morning and Hurricane is a sleepy little town, so there was never much to fear in terms of traffic.

Around mile 4 I started getting into the groove.  I was working up a pretty good sweat but my pace was coming down.

Just around the mile 5 marker, we split off from the marathoners.  I figured that the majority of runners would be joining me on the half.  However, 90% of the runners took a right -- meaning they were running the full!  The turn off was super wall marked and even before the race started, the director informed everyone where to go. 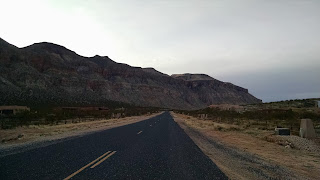 I looked to my left and there was hardly anyone running the half marathon.  I actually had a good shot at winning my age group.

The spurred me on and around mile 6 we started to ascend a hill.  It wasn't a back breaker by any means -- it was just a long slow grind.  I was maintaining a decent pace but I could feel my energy just fade.  I popped a gel and that seemed to help. 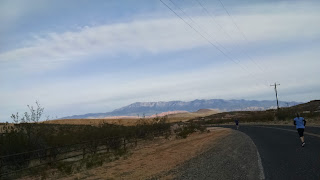 The hill seemed to take forever but I was enjoying a new route and seeing some stunningly beautiful houses.  Also the smell of sagebrush smelled awesome.

At the summit of the hill we had to run down a small section, get aid at the aid station and then climb the small downhill section.  Luckily after re-summitting the hill we got a glorious fast downhill mile.

Unfortunately that was short lived. And the flats started again.  For a few miles I was really struggling.  There wasn't anyone to work off of and the nearest people were about a quarter mile in front of me.  Also this stretch there was some traffic.  I had a pretty good shoulder to run along and the cars also had plenty of room to move over.

Finally, another woman passed me and I wound up working with her.  She had an awesome steady pace and that perked me up for a few miles as we headed into the home stretch.

The final 5K or so was part of our out and back but it all seemed so different coming from the other direction.  Luckily, I remember running sections of it from the previous times I've run the marathon.  It was comforting to know I was going into the home stretch. 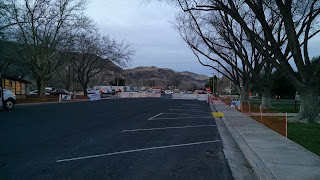 I was pretty tired coming in and I knew I had top 10'd it.  Since the course was out and back in a stretch, I had seen the lead back.  I was hoping to get very low 1:50's given the course was flat and I was running at a lower altitude.  However, I think the early miles had cost me some time and despite a second wind late in the race, I just couldn't must up some faster splits.

I crossed the finish line to a small, but cheerful crowd. 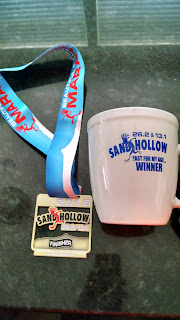 I am not sure what happened to the race distance on this one.  I think my Garmin was pretty much lining up with every mile marker until about mile 6.  I talked to a few people after the race and most of them said they felt the course might've been short.  However, I have had problems with my Garmin in this area before and even one person said he app just sort of gave up tracking her GPS.

I really liked the new section of course.  While I didn't get to see the Sand Hollow Reservoir, I found the country farm road running to be pleasant.  I also loved the "desert smell" in the early morning.

The course, for me, was well marked except for one tiny stretch.  Luckily I had other people to watch where to go.  Even if I had been running solo, I think I could've figured it out.   However, at the hotel I did run into a few runners who did the hill challenge half and they wound up running about 3 extra miles.  Their turnoff wasn't as clear, which is always unfortunate. 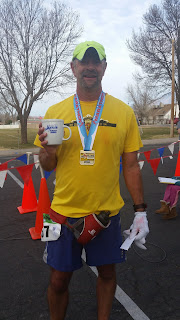 Post race spread included some fruit, bagels and chocolate milk.  In years past he's had more substantial food.  Given that I finished around 9:00 AM, my guess is that the local pizza guy wasn't making pizza just yet.  I wound up grabbing some snacks and drinking a bit before heading out.

I really like this race for it casualness.  I didn't have to wait for any big awards ceremony.  They just checked my finishing card, handed me a mug, took a few pictures and congratulated me.  I love small races.  It was like bing-bang-boom, I was done and sent on my way.

I paid about $60 for the race a few weeks before the event.  I had a coupon code when I had met the race director at the St George Half Marathon.  So I saved a lot of money.

I got a pretty nice shirt and the medal has definitely been upgraded over years past.  There was ample course support -- about an aid station with great volunteers every 1.5 - 2 miles.  I carried my own hydration, which I used a bit but I could've gotten away without it. 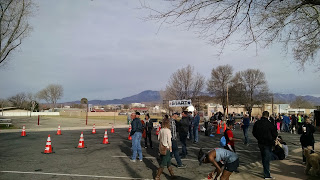 My performance was so-so. I think I still haven't recovered from last week's half and I think I was had the pre-race jitters.  I have some stress at work and I think that sort of got into my head.  The hotel was a great choice though and I had slept well and I really had zero pre-race hang-ups about where I needed to be and when.

This race is a good one.  It is small, no frills and like always, enjoyed it.  There were people from Las Vegas and Northern Utah as well as some people who had traveled long and far to the race.  My only concern though was whether I had really run 13.1 miles.  My hunch is that it probably came up a bit short -- I'll have to trace it out on MapMyRun.  I did love the course though and would run this one again.