Well, as part of the Winter Striders Race Circuit, the 10M race is right smack dab in the middle of all the events.  It is also the final race of the season that is held had at the hilly Dee Events Center, on the east side of Ogden.

Faithful readers may recall that I did this race last year and scored a 1:27 finish time.  While, I didn't have any lofty goals this year I was hoping to get within 30 seconds (plus or minus) of last year's time. 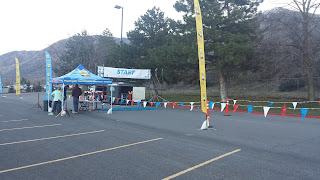 The race start was about 8AM and I rolled in just shy of 7:30.  Packet pickup was a snap and after using the restroom I started in on my warm-ups.  I knew the race was super hilly (about 900 feet of elevation gain according to my Garmin) so I took it pretty easy -- mostly warming up with some dynamic drills and a little bit of light running.

The race started on time and my goal was more or less try to run as comfortably as possible and try to run strong in the final 5K.  I was going to take the downhills in stride, go easy on the uphills, not walk, and try to run a nice pace in the flats.

The race is basically a combination of the 10K and the 5K with a bit more distance.  The first 5K is largely downhill and I wound up crossing that in about 25 minutes.  A little fast for what I wanted but being it was downhill, I'd take it.

I knew miles 3.5 through 6 were going to be the toughest.  There are some flats but mostly it is just up -- and not a gradual climb but slow plod up some nasty hills.

Once I got over the 10K point I thought I had about a mile before I might run into another hill.  Unfortunately, that wasn't the case.  It turned out at about mile 6.5 the race continued to climb -- for a good 1.5 miles more.

Luckily the final 5K was much more manageable and had about 2 miles of slightly downhill or flat sections where I could finally turn on my jets again.

The course is run primarily through a residential area.  The police force were out in force though managing the traffic.  The houses ranged from 1950's type of stuff to fairly new and nice McMansions.

There were only a few intersections that weren't manned and while there were a ton of turns, the course was well marked and easy to navigate.  In addition there were water / Gatorade stations roughly every 2 miles. 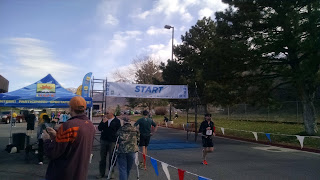 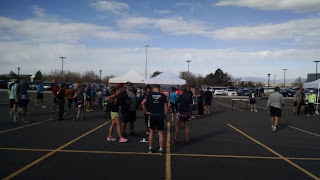 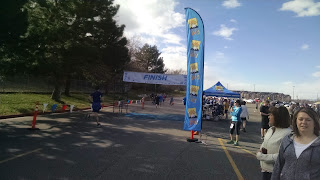 Well, I was close to last year's time, but I certainly didn't beat it.  Maybe last year I was less intimidated by the hills and went all out or this year I decided to dial it back -- probably a combination of both.  My legs weren't terribly fresh either -- probably on account of last weekend's half.

That being said, I did have some moments of improvements.  On the challenging mid mile hills, I did manage to surge a bit and overtake a number of people.  I also held up in the later miles and held a fairly decent pace.  So all things said, it wasn't too awful of a race.

After the race, I wound up socializing a bit and grabbed a few donut holes and some Gatorade before taking off.
Posted by Eddie Gaul at 12:04 PM