Normally I don't race more than a 5K the week before a marathon but being that I've been running pretty well and was looking for something to do today, I opted in for the Inaugural Lagoon Half Marathon.  I had a choice of three races today and I wound up going with this one despite it being the most expensive of the bunch (I paid $85 with service charges + taxes).

Also since I had registered about 2 days from the start of the race I wasn't eligible for a finisher's medal.

The race was held at the Lagoon Amusement Park in Farmington Utah (about 30 minutes drive from my house).  It is the biggest amusement park in the area featuring a lot of roller coasters and other kids rides.  They also have a bunch of adult rides too and for Utah it is the place to be if you like that sort of stuff. 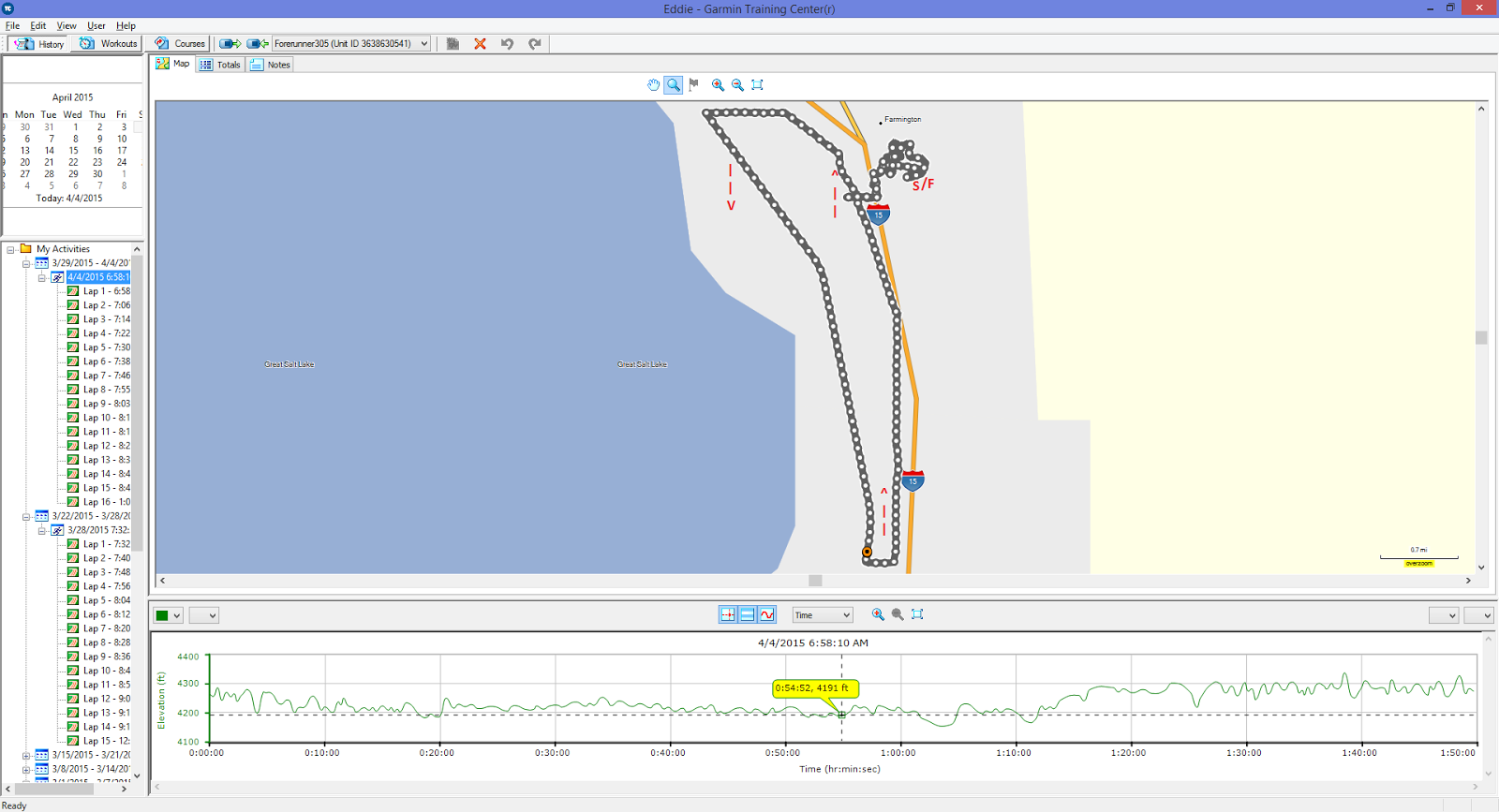 
I got up at about 4:30AM and inhaled a quick breakfast followed by a can of beets.  I also polished off about 80% of the juice in the can.  I am starting to get more convinced that this stuff actually works.  It is pretty vile tasting but I haven't had any ill effects from it and it does seem to make endurance activities a bit easier (see here).  This is the third race I've used and each time I've used it, I've performed well.

I rolled into the race site at about 6AM and after searching in the dark for the packet pickup, I found it under the glow of a roller coaster.  A few minutes later I had my bib and shirt.  I used the porta-potties before heading back to my car.  Around 6:40 I got out of the car and used the bathroom again and the race started promptly at 7AM 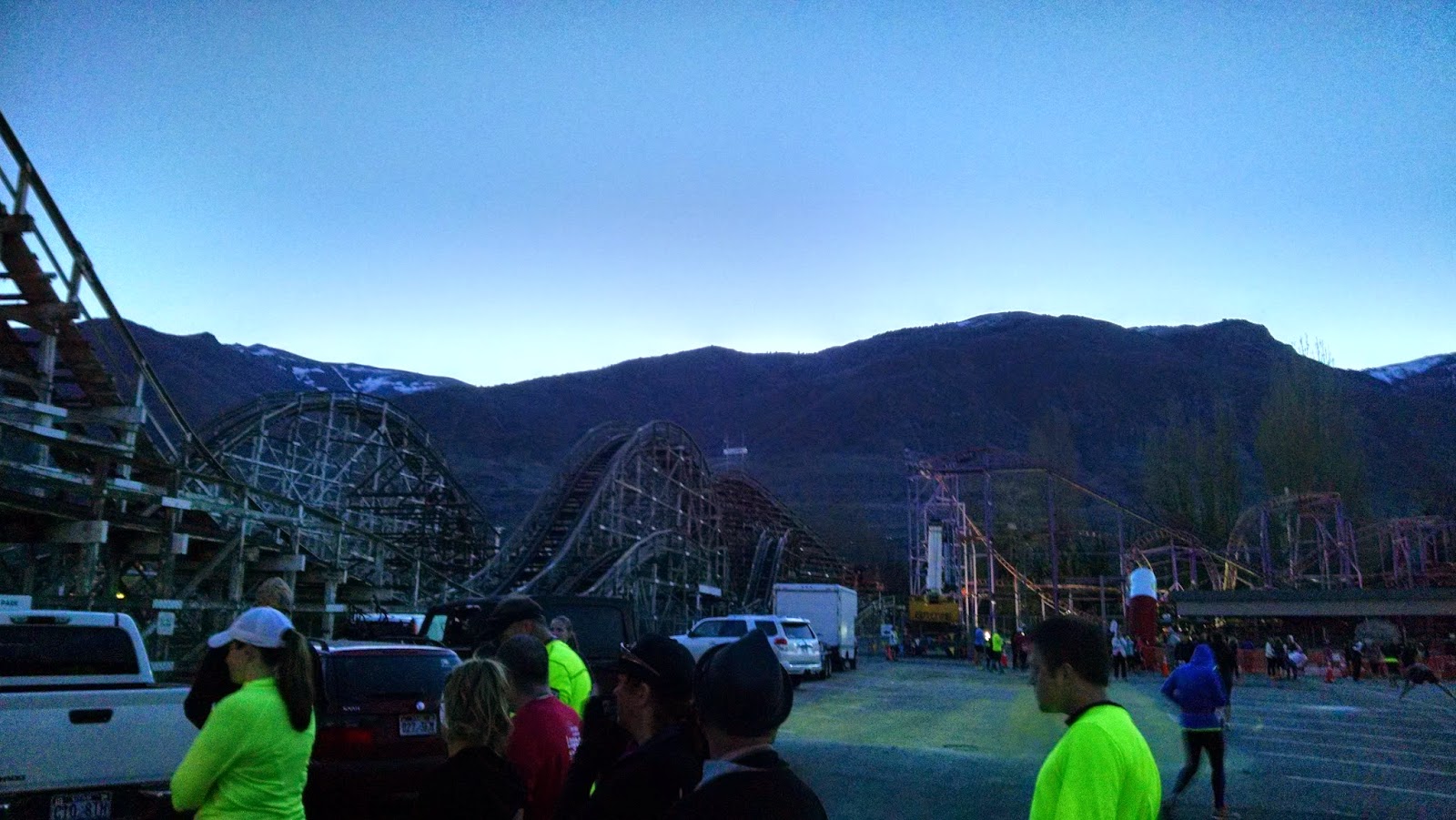 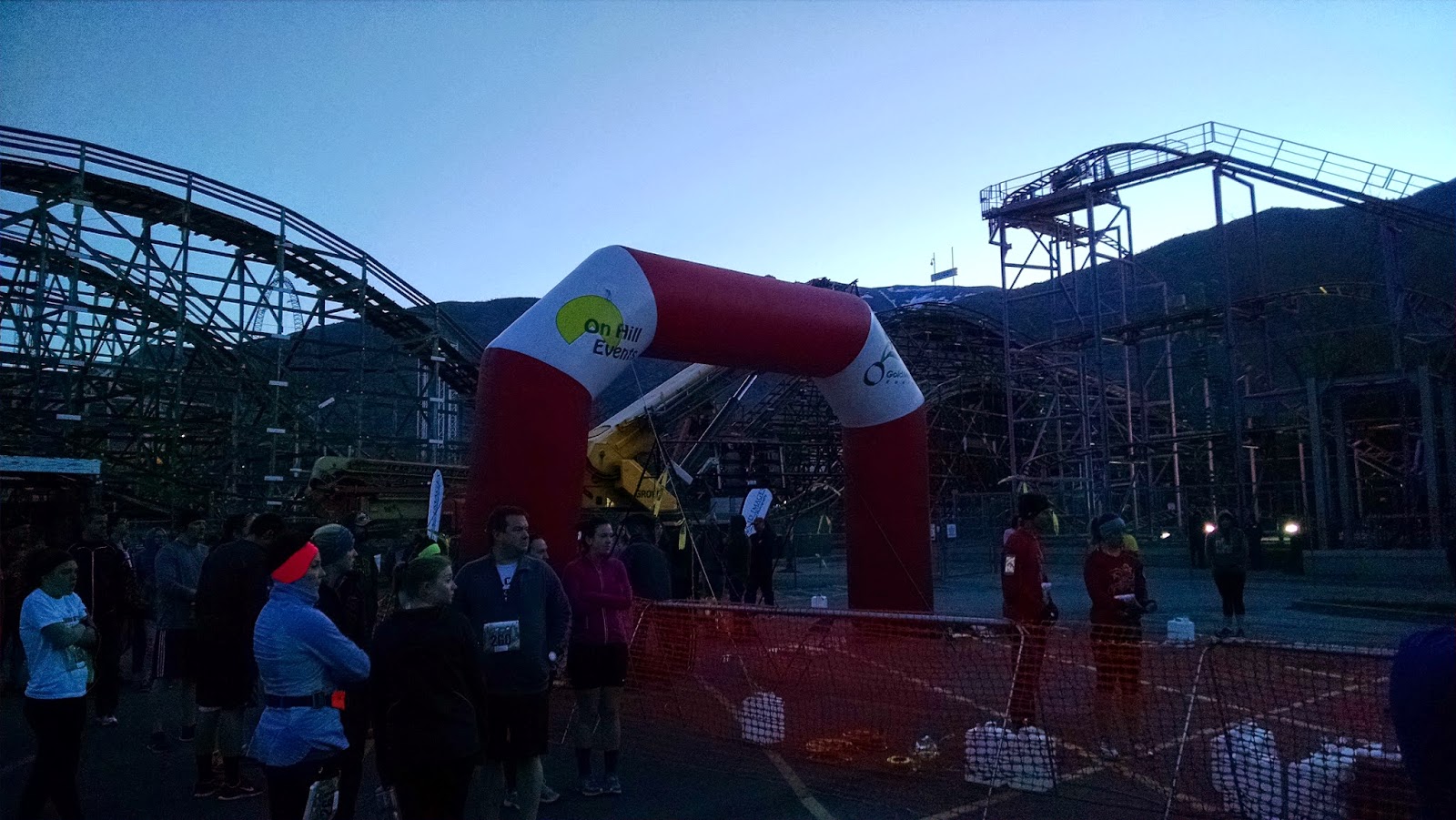 I got off to a good start and after a brief tour of the parking lot we crossed over I-15 and jumped on the Rio Grande Bike Trail.  This was a pancake flat section of bike trail that I don't think I've run on before.  It isn't terribly interesting but it was easy enough to work up a good head of steam.

Water / aide stations were appropriately proportioned and I felt like I was making solid progress while on the bike trail.  The mile markers were -- consistently off -- at least according to my Garmin.  The only mile markers that were even remotely correct were 7 and 11.  3 was at 2.6 and the rest were almost always .1 miles off.

After about 7 miles we headed north on the Legacy Bike Trail.  I've run on this section of the bike trail for the Midnight Half Marathon and I may have been here before for the Farmington Days Half Marathon.  It is a nice stretch of flat bike trail that hugs the I-215 Legacy Freeway.

I was pretty gassed as we approached the park.  I hadn't been aided by any hills this time and the only thing that kept me chugging along was knowing I had less than 3 miles to go.  I knew the best part of the race was coming up to: the final 2 miles were entirely in the amusement park.


I was a little worried about the final two miles to be honest.  The race director had warned us that there'd be lots of turns, but assured us that if we followed the arrows and volunteers directions we'd have no problems.  I am happy to report that was about 90% true.

We both made a loop around a cabin that was close to a quarter mile long only to discover the volunteer pointing us to do it again.  I was like no way and luckily I spotted where the race was supposed to go.  I had heard a few people had done a few loops around it before realizing they were in an infinite loop.

I've been lost in races before and it is always disheartening.  You almost want to throw in the towel and say "F* it"  I was never really sure how far I had to go and I was starting to panic when my Garmin binged 13.1 miles and the finish line wasn't in sight (also there were no mile markers in the park).  I wish I had snapped more pictures, but my hands were cold and wet and I was really trying to bust it to the end.  Also, there were a few 10K racers who were flying by us (they started an hour later). 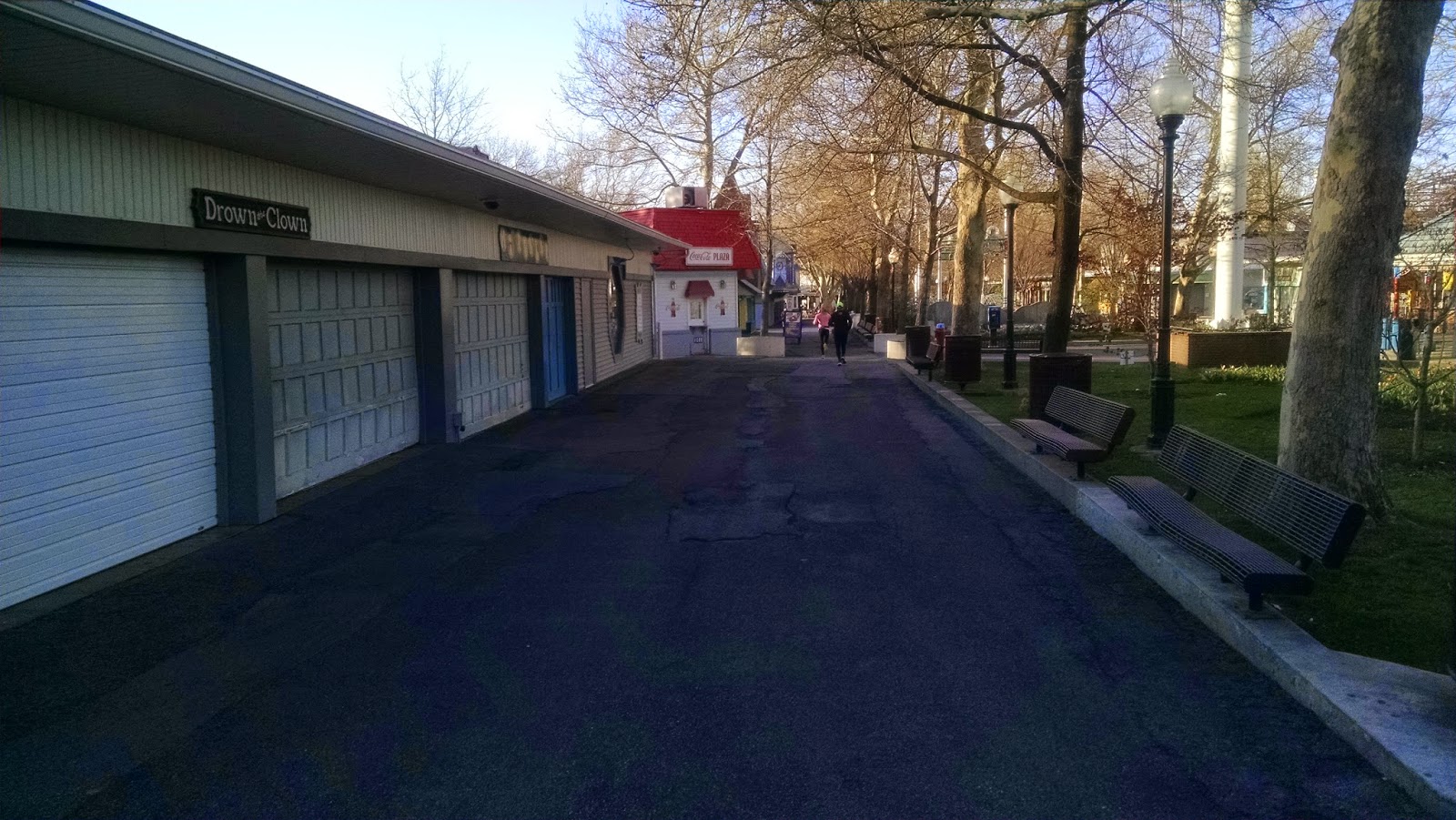 I got my finisher's card only to discover I was 4th place!  Ugh.  Then I wondered if a 45-49 year old had top three'd, which would move me into the top 3.  I checked the online results.  Sure enough the overall winner was 45, so that meant I finished 3rd.  I wound up hanging around for a good 30 minutes and snagged my award.  At least I went home with something since I was sans a very cool finisher's medal: 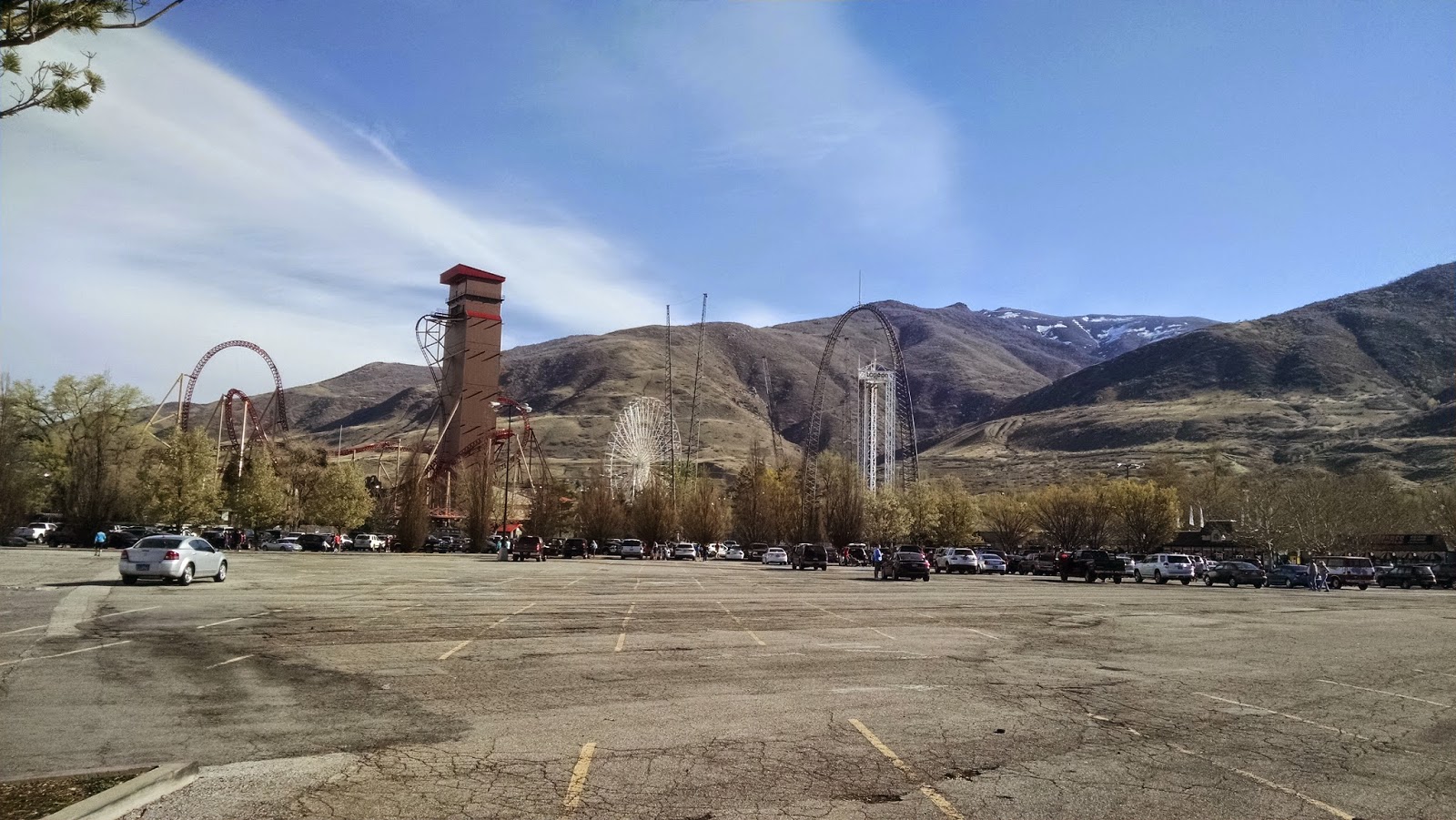 I wound up hanging around for a while eating a ton of oranges and socializing with a few people (I ran into a guy who had run the Shamrock race with me last month).  I hadn't bought a day pass to get into the park (I am not into rides very much) so of course I made the drive up the freeway to the Layton Golden Corral.  Luckily I made it before the 11AM meal turnover and scored the lunch selection for the breakfast price!  I am happy to report they still remember me there...

Despite a slower time than last week, I felt like this was another race in a very positive direction.  I maintained my goal pace for a LOT longer.  I think if the race had been another 2 miles on the bike trail and measured at 13.1 I would've finished a lot better.

Hopefully they make some improvements to the route in the amusement park.  It was confusing at best but to be honest, I really liked the raced.  By the size of the turnout for the 5K and 10K, I have a feeling that this race will be around next year too.
Posted by Eddie Gaul at 1:26 PM