Normally when we go to Vegas, we leave first thing in the morning: usually by 6AM.  This is for two reasons: one to avoid any traffic in the Orem / Provo area and two to reach Mesquite for the Virgin River Casino breakfast buffet (a steal at under $8).  It also gets us into Vegas by 2 or so, which gives us plenty of time to get settled in before dinner.

We weren't in any hurry this time around, so we left at 9AM.  I am happy to report it was smooth sailing nearly the entire way.  My running injury was better, but I still am not running.  I had heard massage worked wonders on calf / achilles injuries so pretty much the entire way I had my left hand on the steering well and my right working on the knot in my calf.  By the time I had reached St George I had nearly rubbed my calf raw (that's how badly I wanted to run).  I had also found the sweet spot -- enough to bring tears to my eyes if I really probed it.  I am happy to report that my efforts weren't for naught and it did help significantly in reducing the discomfort I felt.

We made Mesquite in about 4.5 hours and inhaled a buffet.  I haven't been there for a lunch before but the price increase was only a buck or two more.  I think we ate for under $20.  The omelette station had turned into a stir-fry station and I'll be honest it was GOOD.  I ate my typical 2 plates, plus a plate of fruit plus any desserts that weren't nailed down.

After eating, I found my favorite slot machine, Leonidas.  Last time we were at Virgin River Casino (in November) they had about 3 different machines... this time there was only one.  I put in a $20 and had some fun with it, but it wasn't paying.  I stuck another $20 in and hit paydirt after 3 spins with a $50 Leonidas swarm hit.  I was ecstatic.  I wound up playing a little Multi Strike Video Poker and my old stand-by Planet Moolah which brought me up a few dollars, but nothing major.

We left Mesquite about an hour or so later and I was about $50 richer.

The trip to Vegas went smoothly although there were a few spots where the road suddenly turned into 1 lane.  I made a mental note on this because I know there is a lot of traffic on Route 15 between Vegas and Mesquite, particularly on the weekends.  However, when we passed through it was light and we had no problems.

We were staying at the Excalibur.  I've stayed there plenty of times before and it isn't anything fancy.  It is close to the freeway with easy access.  People with families tend to stay there so it is really known for a "party hotel"  I had gotten a pretty good rate on the hotel (about $225 for the entire weekend).  Shari's first words were "This isn't the Aria" upon arrival to the room.  We had a good laugh about that as we were on a budget.  A nicer room would've been a few hundred more for the weekend at other places.

We unloaded our baggage and decided to head towards Planet Hollywood to start Caesars Entertainment's Buffet of Buffet Plan (all the buffets you can eat in 24 hours for one price).  We stopped in at New York, New York on our way there and I continued to get lucky, hitting an old school Cashman like game for $30 and an IGT old school Haywire for about $20 more.  When you are hot, you are hot.  Shari kept hovering with some losses but she fell in love with a new Dragon game of some sort.

The Planet Hollywood buffet was good although I was sorely disappointed with the fact that they no longer offer steamed crab legs.  They had the cold ones, which are okay, I guess, but most everyone I talked to likes them steamed.  Sadly I think this buffet has gone down hill.  It isn't awful, but it used to be a LOT LOT LOT better (hint hint Gary Loveman)  I guess with their 21 billion in debt Caesar's can't spare a little extra for their customers.  Also missing was their freshly fried shrimp -- which had been replaced with some stuff that was akin to what you'd find at Golden Corral.  They had also jacked up the prices for their weekend buffet (luckily this didn't apply to me since we started on Thursday) from the mid 40's to the 60's.

We gambled a bit at various places on the way back and Shari made a come back on some of the machines (White Orchid) in Planet Hollywood while I pissed away my wins there and at the Cosmopolitan.  Overall, I did finish the night a little on the upside.  Noticeably absent were any Leonidas machines, which frustrated me...  I was tempted to drive back to Mesquite just to play.

The room was comfortable and the air conditioner was up to the challenge of keeping the room cool.  We had left Utah with temperatures in the low 50's and suddenly found ourselves in temperatures approaching the low 90's.

Our room was on the north side however, which meant we could hear the airplanes from McCarran take off and like the city, McCarran never sleeps.  Also they were doing some sort of construction below us and we could hear the sound of trucks backing up throughout the night (as well as jack hammering).  I slept poorly and wasn't terribly happy about it....

But we'd deal with that tomorrow.... 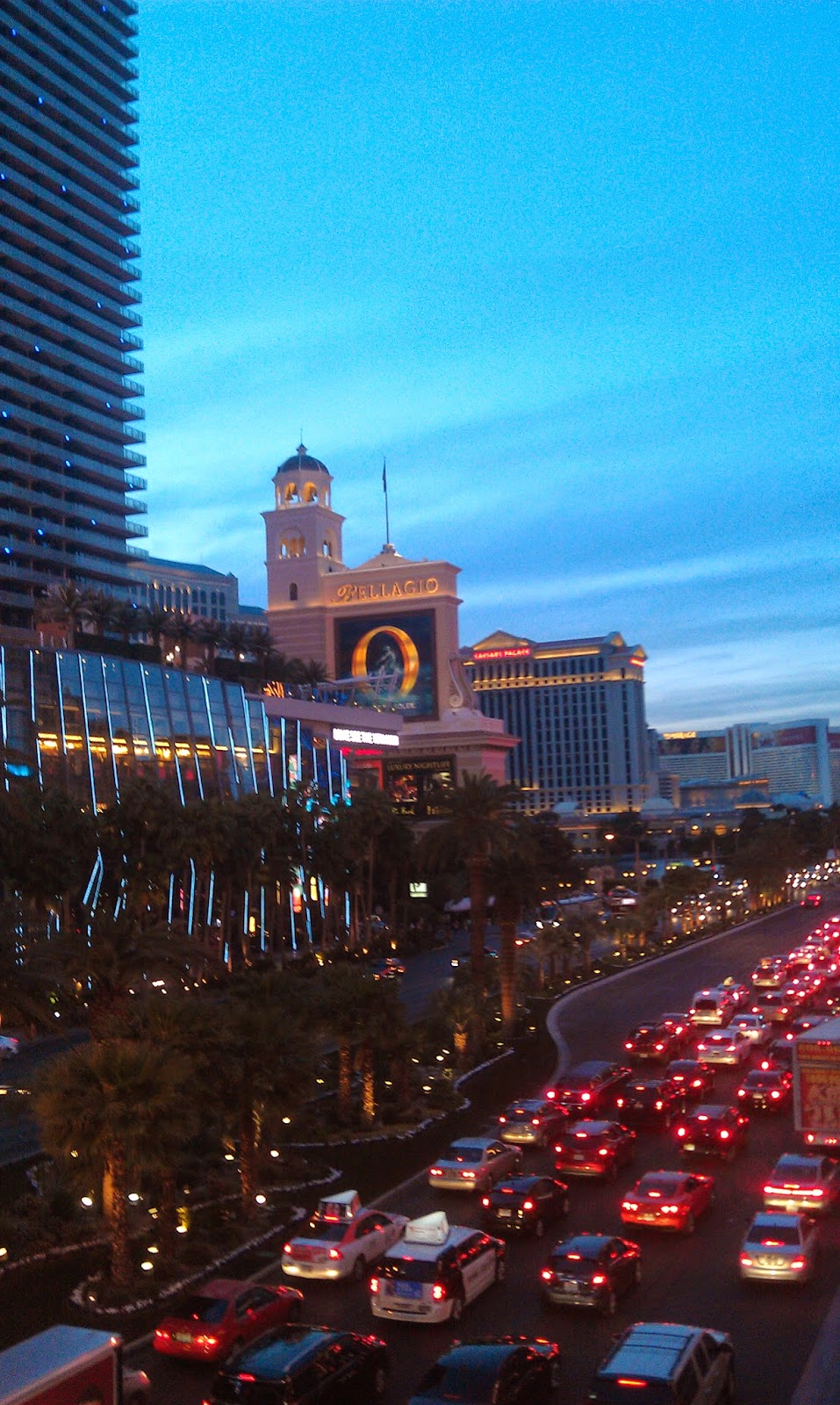