We slept crappy due to the construction noise but we were ready to roll by 10AM or so.  We jumped into the car and drove to Harrah's.  I don't like driving in Vegas that much.  It stresses me out and Nevada drivers have inherited ALL of California's bad habits.  In fact, it reminds me a LOT of driving in California.

I jumped on Koval and found a way to the back of Harrah's.  They really need to post better instructions as I wound up missing a few turns and made an illegal U-turn or two.

Since we were doing the 24-hour buffet plan, we jumped into the Flavor's Buffet.  I used to like the Flamingo Buffet in the morning but they've gone down hill too.  Flavor's has improved and is my go-to place for breakfast when I am on the 24-hour plan.

For some reason, my buffet skills were weak today and I filled up fast.  We did meet an interesting couple from Sacramento that we talked too while eating.

I never have any luck in Harrah's and so we decided to go to Summerlin's Rampart Hotel and Casino.  I missed the freeway exit for Summerlin (to be honest I didn't do my research on how to get there -- I was going from memory from last year) but we did wind up there.  Again, I must comment that freeway driving in Las Vegas is a death-defying experience....

I had to go to the Rampart to pick up my race shirt and offer my services as a volunteer for Saturday's race.  While I was tempted to run, I knew it was way too soon to be racing and I suspected that I'd be walking within 3 miles.

I was ecstatic to find out, however, that they had NO record of me registering.  NONE.  I logged into the race website and sure enough, I had NEVER registered.  I checked my email as well and I am normally really good about saving receipts, but again, no race receipt.  I began to think back and sure enough I had gotten the hotel and made a mental note to register later for the race "just in case I was injured".  Turns out, I had never registered.  While I was worried I was going to lose out on $75 or so, I hadn't spent it.  Also turned out they were amply supplied with volunteers.  Either way I could've jumped up in the air and shouted yeehaw I was so relieved.

Last year, Shari had fantastic luck at the Rampart.  Since it is off the strip, we figured they'd be loose.  I did manage to play for over an hour on Multi-Strike Video Poker, but I easily pissed away $60 there and Shari's luck was even worse.  We both like the casino but we were big time losers by the time we left.  We kept hoping our luck would change, but sadly it never did.

We drove back to the Excalibur, getting slightly bogged down with the rush-hour traffic forming on the freeways.  Shari called the front desk and complained about the noise and asked if we could switch rooms.  Excalibur was very cool about that (They had some really nice employees and were super nice to us).  We soon had to go down, get new room keys, pack our stuff up and move 4 floors up.

Upon arrival I started to unpack and throw my stuff on a bed when Shari noticed there were clothes hanging up in the closet -- that weren't ours.  The room was clean and no other evidence of people were in there.  We called the front desk and asked them what to do.  They said come on down, we'll give you a new room.  So I had to pack up AGAIN.  Shari asked for an upgrade to Tower II, which has the newly remodeled rooms and  normally are an additional $20 a night.  They gave us an upgrade room for free, which was super nice.  Again, big Kudos to Excalibur.

I sat by the pool and did some Jacuzzi time and then later we wound up heading to the Rio.  Driving there was filled with traffic as we took Frank Sinatra Road that was stop and go for what seemed like forever.  We did see a pair of Elvi in a pink Cadillac as well.  Should've snapped a picture.

The Rio buffet hasn't been screwed up too badly and they offer more food varieties than I could count.  The quality was good too.  They had the steamed crab legs but they weren't pre-cut, so I was stinking mess because I inhaled several plates of them.  Come on, pre-cut them.  I hate having crab particles all over my shorts / shirts and even worse my hands stink now.  Peal and eat shrimp also is the worst... come on Vegas, don't cheap out on me.

We wandered around and gambled a bit and I wound up making some ground on a WMS Spartacus machine and Mr Cashman was nice to me as well.  Shari continued her love affair with her Dragon game and wound up coming out a head.

We got some good views of the strip from the Rio parking garage as well.

Overall, it was a good day and we slept great... 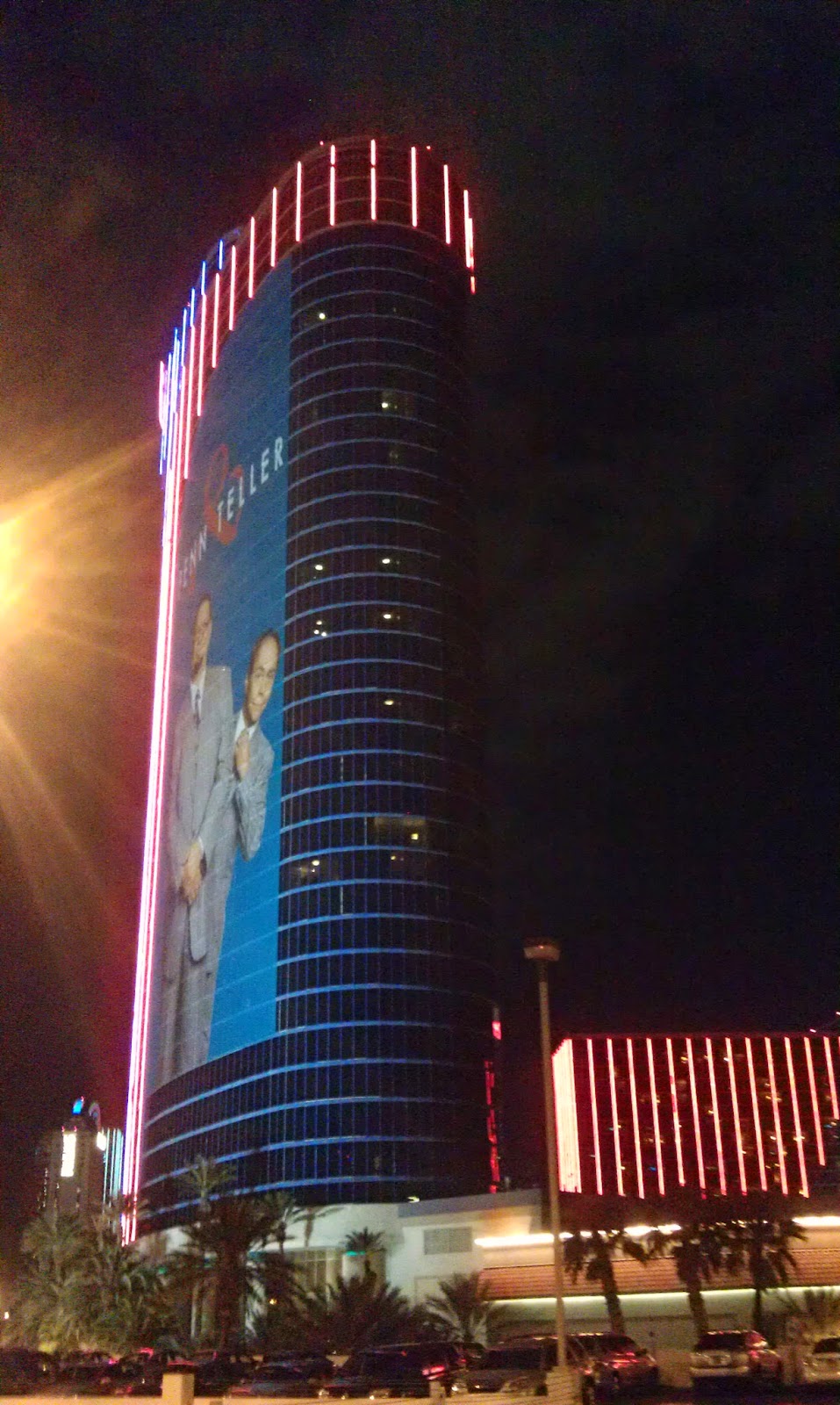