As many of you have known, I am training for my 11th marathon  -- the 3rd one this year.  Being a sucker for anything "Vegas" I signed up for the Las Vegas marathon the first day I possibly could.  This will be my 5th time doing it (go figure, I will have done about 145 miles of racing in Vegas since 2009).

One of the key components of running a successful marathon is getting in your long run.  I've been doing runs of more than 15 miles since August and while I was tempted to do an October marathon, I decided to stay focused on Vegas.  I haven't been running particularly well this year (in terms of speed) but I have been durable and getting upwards of 40 - 50 miles a week regularly. No sense of ruining Vegas by being tired or worse injured.

This Saturday marked my "last" long run in preparation for the big day.  I started out with a sane goal of hitting 18 miles, if I felt good, maybe I'd do 20.

I got up at 6:30, hoovered a quick Wheaties breakfast and headed down to the Jordan River Trail System, about 6 miles away from the apartment.  I hit the trail just as the sun was coming up and the mist was heavy on the river.  It is super quiet at that point -- as well as cool temperature-wise -- with an initial and ideal 40 degree running temperature.

I have been using a Fuel Belt of late instead of the Camelbak.  I have to say I enjoy it a LOT better.  It has better breath-ability and I am not constantly fiddling / tightening it, like my Camelbak.  It holds the same amount and I will likely use this from now on.  Also the Camelbak seems to be on the "no-go" list for many marathons as they have banned them for security reasons (bah....)

I started out very easy, hitting 9:15 miles pretty consistently.  Suffice to say my average pace was about 9:35 so I was bouncing around a bit.  But when I got to 9 miles, I decided to go a little further and wound up running 20 miles total. I still had plenty of gas in the tank to go a bit more, but the temperature was climbing and at this point I was over dressed (shorts, gloves, windbreaker)

I really enjoy running on the bike trail and am starting to make running friends down along there -- as I see the same people week after week.  Sometimes it is just a mutual nod of "howdy" and sometimes I strike up conversations.  Go figure -- today I met 3 people from Chicago and regularly see a track coach who moved from Chicago last year.

I did wind up taking a few pictures and figured I'd share some of the fall foliage, which has now settled upon the Salt Lake Valley.

I am just glad my long runs are done and the marathon is now on the horizon. 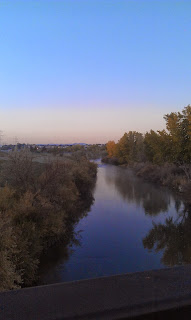 At about mile 2.5, looking south on a pedestrian bridge 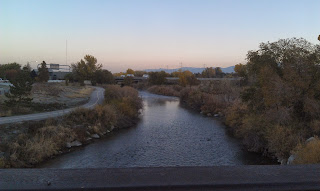 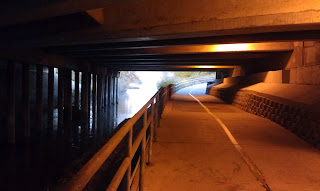 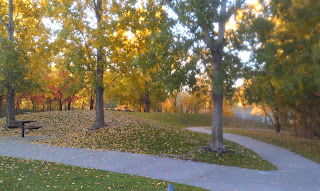 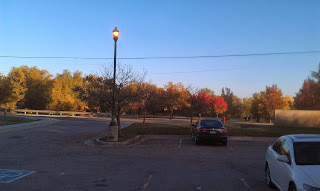 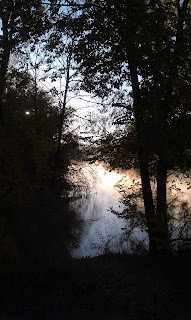 Mist over the Jordan River 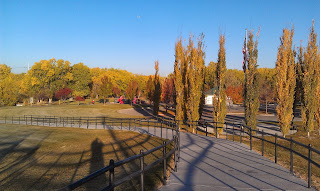 At mile 7.25. Another nice park with bathrooms + drinking fountains 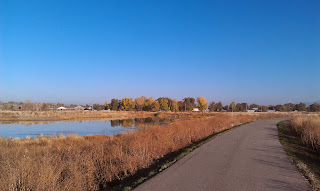 My turn around point, looking north 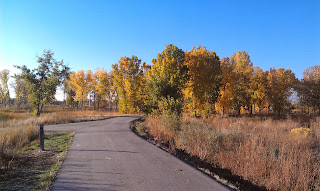 My turn around point, looking south 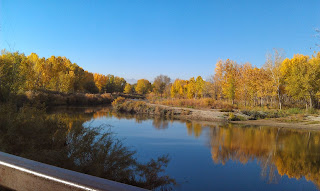 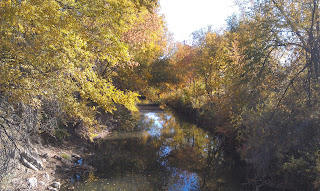 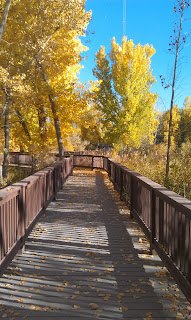 I love this bridge...