I've been alternating long runs on the weekends -- One weekend I'll take off and the next weekend I'll do 18 - 20 miles (all in preparation for the Las Vegas Marathon in less than 30 days).

After reading an alternative workout on the Running Competitor's Website (and various magazines)  I decided to try and run 8 - 10 on Friday night and then get up and run 12 in the morning.  This type of workout gets some serious miles in while still in a tired state, which simulates the latter miles of a marathon.

On Friday I ran quiet well, doing a very hilly right in my neighborhood.  I started out at about 4400 feet and climbed up to about 5100 over the course of the first 4 miles.  Braving the traffic on Wasatch Blvd I found a lovely 1 mile trail and took that west.  I felt good throughout the run despite the hills and after having a long day at work.  I think the vitamins I've been taking are helping restore whatever I was missing about a month ago.

On Saturday I got up before the crack of dawn, powered down a Larabar and headed to the bike trail.  It was in the low 40's when I started and the sun hadn't even begun to come out.  It is sort of creepy being on the bike trail that early, especially going under the bridges.  While I was extremely stiff getting going, I did loosen up and I was hitting a leisurely pace of about 9:20 miles.

The last 2 - 3 miles were tough as the fatigue in my legs that had been building up slowed me down (and I didn't bring any gels or additional fluids with me -- luckily the drinking fountains were on).

There weren't many people on the bike trail -- most of the major marathons in Utah are long over but I did run into a few groups who were training.  I think the most exciting days of the year on the trail are over unfortunately.

I still have one more long run to do starting my taper for Vegas.  I am definitely looking forward to the rest.  While I was hoping to clear 2000 miles this year, I am probably going to come up short. 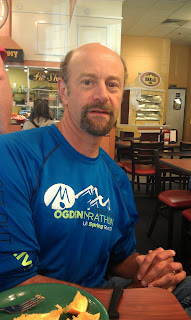 Me celebrating my run at the Golden Corral in Midvale. Just wrapped up my 4th plate of food.