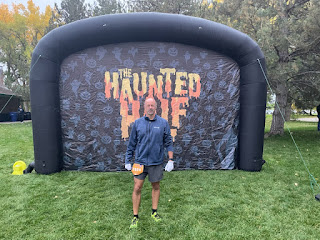 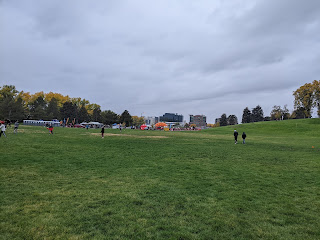 So one of the big traditions for runners in the Salt Lake area is to run one of the Haunted races produced by Runtastic Races.  They are popular race organizers with a good reputation of putting on fun, well run events.  Their Halloween races are probably one of their biggest events.
In the past, I've done their Provo-based half marathon and last year I did the Salt Lake edition of their 5K, which was run on a hilly course near the city zoo.
This year, with Covid restrictions and concerns a bit on the backburner, this race was held at its original location: Sugarhouse Park, on the southeast side of Salt Lake City.  So while the race was a repeat of last year's, this was a brand new course to me. 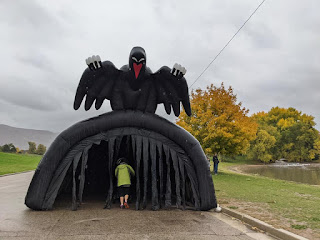 The race started at 8:30 and I got to the race site at about 7:30 or so.  I had my bib picked up for me on the day before the race, so it was a fairly low stress start to the race.  With over 900 runners, I was glad I didn't have to wait in line, stress about parking, etc.  Not really knowing the layout of everything I wound up parking a LONG ways away, which would haunt me a bit later.
The weather forecasters had been predicting rain and the day was gloomy and cool.  Fortunately it was still relatively dry.  I've run a lot of races in bad weather and I figured I could deal with anything for a 5K.
About 30 minutes before the race start I made my way to the starting area.  I quickly realized I had parked far away.  I had brought a warm jacket so I was comfortable. There was some parking in the park, but it ultimately would've been challenging getting out of the park when the race ended.
The race started promptly at 8:30 AM -- just as it started to drizzle a little.  Not the end of the world by any means and it actually was fairly pleasant to run in.  I was wearing throw away gloves, long sleeved t-shirt, and shorts -- which was absolutely perfect.
The starting line was pretty cramped but I managed to get myself wedged in with the top 50 or so runners.  With over 900 runners for the 5K, this was going to be a "full" race.
I had studied the course a bit and I knew the first mile to mile and a quarter were a slight uphill.  The next mile or so you earned back that uphill and the final mile was seemed to be mostly downhill with a tiny roller of a hill thrown in for fun.
My goal was to go out a little conservatively for the first mile, hammer the second and go all out on the third.
Initially I was hemmed in.  With such a narrow start line and plenty of runners, it took awhile to get going.  Fortunately, it opened up as we ran down the service road towards the entrance of the park.  It was indeed slightly uphill but nothing major and I let myself get acclimated to the 5K pace.
After about half a mile we exited the park, ran across a semi-busy street (weird  -- no course marshal here) and ducked into a residential area.  The street was banked, which I hate running on, so I sort of ran down the middle of the street.  It was tree lined with beautiful fall colors and mature houses.  I thought this was probably the prettiest sections of the course.
The hills continued here but they weren't too serious.  Just a gradual incline.  I felt good and in control of my pace.  It was humbling at times to be passed by runners in heavy costumes, but I kept going picking off other runners who had gone out too fast.
I was shocked-- actually stunned to see an 8:37 flash on my watch for the first.  I knew the course was uphill but I certainly wasn't running that slow?  Or was I really having a terrible race?
I thought about just calling this a fun run and not beating myself up too much.  But I've been training all year long on my speed.  Perhaps I had plenty in the tank and I would turn things around.
The course was supposed to be mostly uphill for the first 1.25 miles, but I noticed that immediately after my watch had beeped a mile that I was on the downhill section.  My turnover increased and I felt like I was racing again.  There were some people ahead of me in my age group (I felt) and I kept up with them.  I was mostly running with high school aged kids and people half my age.
We had made some sort of crazy loop around the neighborhood before being dump back out towards the main street and crossing again a fairly busy street without any supervision and re-entered the park.
There were a pair of signs at the entrance stating we were are mile 2.  The half marathon race also indicated they were on mile 12.  I glanced down at my watch and we were well under 2 miles.  Was my watch wrong? 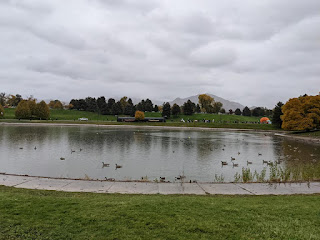 The final mile was a lap around the service drive to the sprawling Sugarhouse Park.  There have been many 5Ks run on this course and years ago I had run a lap around the park for the Salt Lake City Marathon.  I had vague memories of it and it has a reputation of being sort of hilly.
I dug deep and decided I was going to run whatever was left of the course -- even if this was a short course -- as hard as I could.
I still felt good but I was hurting.  I could see the finish line and hear the celebratory music as I made my way around the park.  I used a lot of my mental training that I've done -- the suffering is only temporary and I had put myself through more trying time trials in training.  I could handle this.
The last quarter mile involved running through a hundred yard tunnel or so.  They have it decorated and it is supposed to be scary.  It is a little dark and there are dangling streamers inside.  It definitely slowed me down, but it is part of the event.  At this point, I wasn't close to chasing anyone done and there wasn't anyone in my age group behind me.
I crossed the finish line in 23:49 and I glanced at my watch.  Was this at least a 3 mile race?  No, it simply shown I had run 2.94 miles in roughly my 5K effort.  Bummer 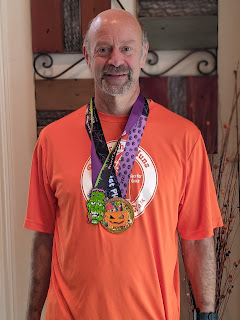 After finishing I went to print out my results.  They are really good about having computers where you can enter your bib number and get instant feedback on your placement.  I figured I was at best 3rd place in my age group.  It just seemed like there had to be more people ahead of me in my age group.  After getting my receipt I was shocked to see that I was currently in first place in my age group.  What???
I was glowing about my age placement but I was still stewing about my overall time.  The course wasn't that hilly.  I wound up grabbing something to drink (even though I wasn't terribly thirsty).  I also managed to get down a banana.
It was starting to rain so I found shelter under a bowery and got my award.  Fortunately I did remain in first place so I scored a beautiful medal. 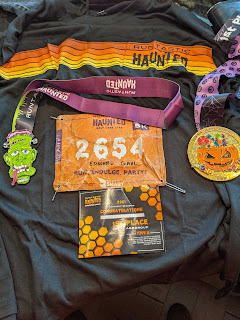 Once I got home I decided to do some detective work.  I had asked around after the race asking various Garmin watch owners what they had measured the course as.  Most got around 3.07, some 3.08 and finally some with a  legit 3.10 miles.
So I looked at my Garmin map and obviously my watch had misrecorded a bit of the race.  It had me running through houses. I used MapMyRun and carefully traced out the route, which came to about 3.15 miles.  So if I ran the tangents and not the middle of the road as MapMyRun likes to do, I suspect the course was a very real 5K.  My spirits definitely increased as I found more Strava users with accurate course measurements.
So this race really went well for me.  I ran right where I had hoped I'd finish and I won my age group.
The race was a bit expensive for a 5K but I was a late registrant and had a coupon code.  There was candy, fruit (oranges and bananas), slices of pizza, sports drink and water at the end.  The finisher's medal for the 5K was nicely designed   The shirt was colorful and also a nice Halloween design.  I just wish it was a 100% polyester blend.
I was really excited after finishing this race.  A little more than a year ago, this race would've been likely a 25 minute finish.  I felt really good on this race and actually was itching to do another one -- soon!
Posted by Eddie Gaul at 7:51 PM