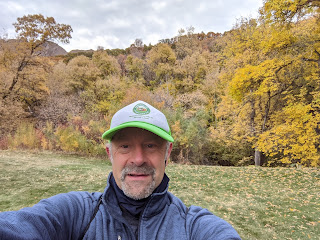 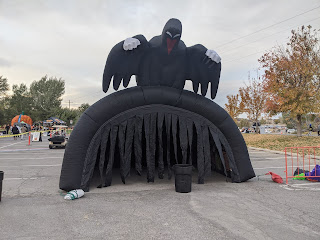 With Covid-19 still hovering around the area, races are semi-far and few between.  Instead of a multitude of races each weekend, there is generally only one or two.
I think under some encouragement and looking for something to do, I opted to jump into the Haunted Half Marathon 5K.  I got the same awesome medal as the half marathon at a quarter of the distance (and about half the price) and I didn't have to expose myself to a bus ride.  I knew this race was going to be a fairly large event but so far I have done well reducing my exposure.
I have run this race's sister -- in Provo back in 2015.  Runtastic, the organizer, can be counted upon to pull off a big event, with high-end swag and a fun race.
So I signed up for the Salt Lake edition of the race and decided to give this race a go. 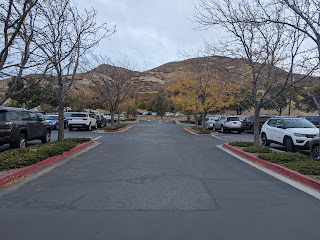 I had a friend pick up my bib the day before the race, so race morning was pretty easy: just find a spot to park (at the Hogle Zoo), warm-up and race.
It was a brisk day but not cold enough where I felt I needed to wear anything special.  I did throw on some cheap gloves and doubled up on my shirt, though.  That was more than enough.
My warm-up went well and I felt like I was ready to have a good race.
The area in which the race was being held is hilly.  I had sort of looked at the course the night before and saw that the first mile would be slightly downhill, followed by several good climbs on mile 2 before a gentle coast down to the finish. 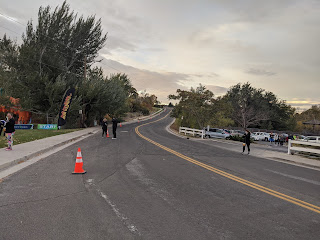 Around 8:30, we assembled at the start and to greet us was a hill (see above picture).  I had no idea what lay beyond that hill, but I knew I had to be warmed up and ready to get up to the top of that if I wanted a decent race time.
I started about 15 seconds back and off to the side in order to avoid as many people as I could at the congested start.  There wasn't a staggered start but merely, a ready-set-go.
I jumped in and quickly got off to the side as I made my way up the hill.  There were a lot of folks who probably shouldn't have gone to the front of the race, but the hill quickly sorted out the runners from the participants. 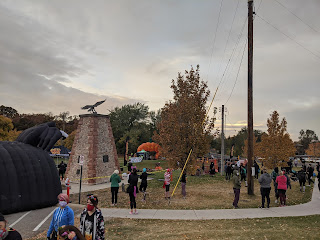 When I reached the top of the hill, I was gassed.  I glanced down at my Garmin -- about .25 of a mile into the race and oh my gosh, I just wanted to catch my breath.  Had I already ruined my race?
Fortunately, after summiting the hill, the race indeed go downhill.  I gathered some strength and started to pass people left and right.  I felt great.   I was shocked -- no stunned to see mile 1 come up so quickly and at a 7:34.  Did I really have a shot at a "really" good time?
I felt a little gassed after hitting the next quarter mile but still felt good -- until we rounded a corner and there was the dreaded hill.  It was nothing but up up up.
My blistering pace came to a crashing halt.  Others around me started walking and I was tempted to do so as well -- but this was a 5K.  No time to waste! 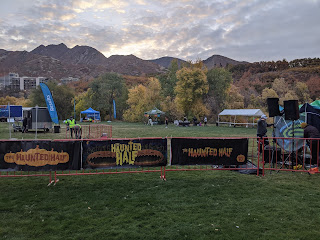 I was enjoying the street race.  We were running through a mature neighborhood with some very well-to-do houses.  I was wondering what they thought of us all running through their neighborhood.  I was in the top 50 or so, but there were hundreds behind me.
I managed to keep my form up as I ascended the hill from hell and got to a flat part.  That should do it, I thought to myself. How much harder could it get?
Just as I was working up a full head of steam again, we turned on another corner and lo and behold -- another hill.  This one seemed less steep but just as long.  I mumbled under my breath to the guy running next to me... what the heck.  He just laughed -- he was just as gassed as I was.
Mile 2 chirped on my watch and I looked at it with dread. 9:30.  I half expected to see that split on my watch but seeing it for a 5K... yuck.  There was close to 180 feet of climb though, according to my Garmin. 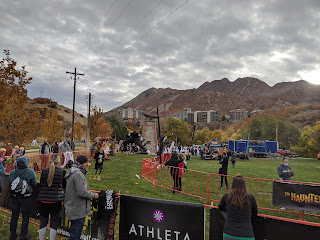 Mile 3 - I was in the home stretch.  The mile markers had been slightly off so part of me was wondering if the course was short... like .1 of a mile short.  I had surmounted all the hills and now I had the gentle decline -- only to be interrupted with the occasional roller of a hill.  But my legs felt like Jello and I had a growing nausea boiling in my stomach.
Finally, we turned yet another corner and I was greeted with the hill I had climbed at the start of the race.  Sweet donwhill!
I scanned behind me and I didn't see many people that looked like they were in my age group.  You just never know though.  Some of the folks who were half my age flew by me, but I didn't see anyone in their 50s.  Maybe I'd have a shot at a coveted age group award.
I turned the corner and ran through a black tunnel with hanging "cob webs"  Not sure I would want to be in that tunnel in this Covid era, but that was the course...  Fortunately it was short lived and I burst through the other end to round my final corner and cross under the finish line.

I wasn't too surprised to see 25 minutes and change on my Garmin -- despite the short 3 mile course (versus a regulation 3.1 mile course).  This course was hard!  And people were talking about it.  It's not that I wouldn't run it again, but it was probably one of the hardest 5Ks I've done in a while.
I was greeted at the finish line with a medal and typical post race refreshments: Powerade, bottled water, bananas, oranges and ubiquitous Halloween candy.  There was food for purchase by some food trucks as well. 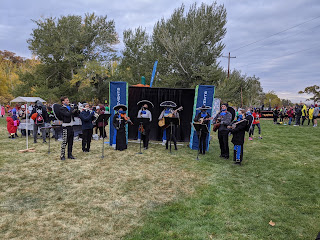 They also had some Mexican entertainment for the Day of the Dead celebrations.  Many people were dressed in costumes as well, which made it fun to see who dressed up as what. 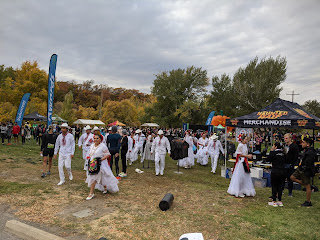 They had a booth to get your results and I was pleased to earn 2nd place in my age group.  Double medal day. 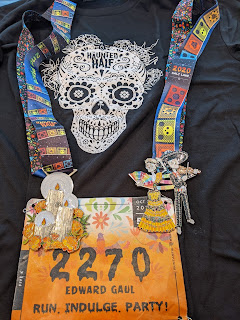 And let's talk about the medals:  they were awesome.  Heavy duty and uniquely designed... everyone was oohing and ahhing over them.  I am not a major medal freak but these were definitely worth getting excited about.
The swag bag was also stocked full of fliers and product samples.  I like the tech shirt and it was high quality.  Just wish the name of the race (and distances) were a bit more prominent.
This race was a blast.  Covid-19 definitely put a damper on it though.  With sky-rocketing numbers, I just didn't feel comfortable.  Most people wore masks before and after the race, but there were just a LOT of people.
I suspect the race might've measured a bit longer and been an official 3.10.  However, I think a lot of folks probably ran the tangents too well and my Garmin probably didn't pick up my distance while I was in the black tunnel.  People (including myself) were definitely running strategically on the road by rounding the corners.
Overall, my performance was decent.  It is hard to say with any certainty how I would've run given an official 5K and on a flat course, but I felt really good most of the time.  My weight loss is paying dividends and my distance and speed work is also helping.
This race wasn't cheap.  $40 for a 5K is on the high-end.  If I had registered earlier, it would've been far cheaper, but I was late to the party.  Overall though, I got a great and fun experience.  I came into the race thinking this might be it for 2020 as far as racing goes, and left asking myself when the next one is.
Posted by Eddie Gaul at 7:16 PM