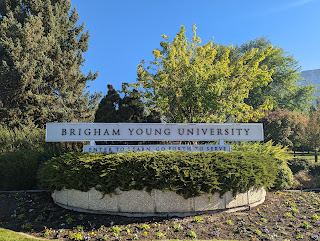 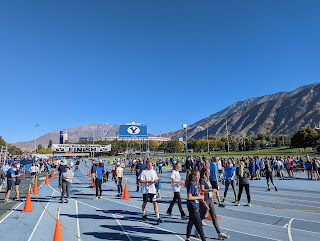 It's hard to resist a $15 5K.  With prices climbing on just about everything, it is nice to still find a bargain for a race.
I'll be upfront.  I am not a huge BYU fan by any means (the football team).  When in Utah you basically pick one of two teams: BYU or the Utah Utes.  In a rivalry game, I'll always take the Utes but that doesn't mean I hate the BYU Cougars.  They are both from Utah so if either team wins I am happy.
The race is held on the track at Brigham Young University and this year's edition meanders off onto the campus for 3.1 miles.
This year's edition had a completely different course than the one I ran in 2017, so something new to experience. 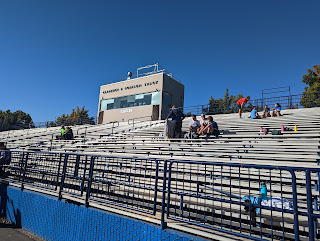 I had to park quite far from the track -- maybe a quarter mile or so.  With an upcoming football game and the race (drawing over 500 runners). They had a great organizational system though.  Find your bib number on a sheet and grab your number from one of the many volunteers.  They had it well staged so I had my bib and shirt within a minute of arriving.
With about 25 minutes to spare, I did a quick warmup.  I did some drills, strides, and some easy jogging to loosen up.
The race had a funny start time: 9;45 to be exact.  With about 5 minutes to spare, we lined up on the track and started off.
My first surprise was that the race was NOT chip timed.  We had a timing chip on the back of our bib but the start had no crossing mat.  I had started about 100 - 150 people behind the front runners and it had already cost me about 15 seconds. 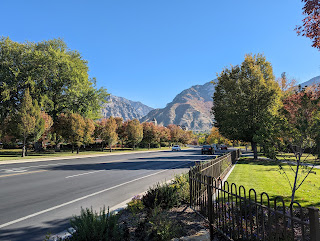 Almost immediately the race became a standstill.  So many runners were trying to get out of a narrow start, onto the track and then run about 100 meters before going up a grass embankment and then to a narrow sidewalk.  There were a few times were I came to a complete halt.
The first quarter mile or so was extremely agonizing.  No chip time and I was already jammed.  As I made my way up a hilly street I wondered if I should just dial it back and call it a fun run. But I continued on. Despite what I figured would be a disappointing first mile, I decided to see what I could do with the race.  The field was completive and most people were dealing with the same issues I had.
I am glad I didn't give up -- the first mile came in at 8:15 -- not too bad considering the early jam ups and up hill mile.  Perhaps with the downhill second I could salvage a decent race.
I was enjoying the course.  I was never alone during the entire race and the race involved a lot of twists and turns.  There really wasn't a dull moment as I flew by campus buildings, meandering students, and fall colors amongst the tall trees.  At times I surged and passed by several people in a burst and I finally felt like I was running well.
Mile 2 -- I smashed in 7;40.  This could wind up being a great race on account that I still felt like I had quite a bit of downhill left to use. 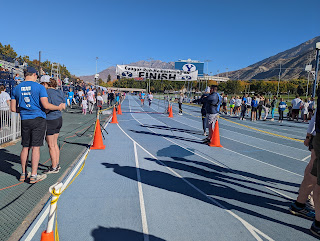 The fun continued into mile 3.  I was really enjoying the race.
Around mile 2.5 is when I started to slow up.  There was a bit of a section with a hill and mentally it was too much for me and I wound up slowing down.
Fortunately once I crested the hill, I was greeted with a downhill and I could sense where the finish line was ahead.  I looked at my watch and I figured I had less than half a mile to go.  I told myself to push hard.
I cruised down the final hill and hit the grass embankment on the top of the collegiate track.  I made a quick jump down and ran the final 300 meters, which seemed to last for an eternity and into the finish. 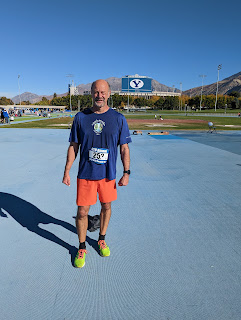 So I managed to salvage the race.  I ran a 24:06 on my watch, 24:20 for my official time due to it being a gun timed race.
So I loved the race course. I actually don't remember very much of it and if you asked me to rerun any part of it, I think I'd get pretty lost pretty quickly.  The course did have marshals and had been marked with race arrows but there were so many twists and turns and I was so focused on racing that I don't remember many of the details.  It just felt like a wild, fast amusement park ride.
I paid $15 for the race so I didn't expect many frills.  I got a cotton t-shirt that actually had a nice design on it.  I feel like I sort of got gipped in my age group: my age group got into the 10 year increment while those younger than me had 5 year.  There were still plenty of 50+ year old runners.  I would've loved to have seen if I would've gotten a top 3 in my age group for the 50 - 54.
Post race refreshments were water and pancakes.  They had chocolate milk as well.  The line was pretty long for pancakes and I suppose I had my chance as soon as I had finished, but I wanted to go back to the car to get my phone for some photos. 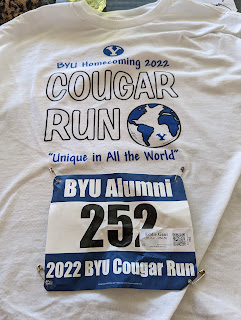 I really enjoyed the event and felt like I had performed well.  The course was well marshalled and despite the complexities, I never felt like I was going to get lost -- but then again, I was always running with people.  I did not like the gun time start and the overcrowded start line.  It was great running on the track but there just wasn't enough room for everyone.  I suspect the hold ups set me back 10 - 20 seconds.
I suspect the race was a legit 5K.  There were so many turns and so many ways to probably run a tangent that hadn't been measured correctly.  I wasn't surprised when I came in at 3.05 miles (according to Strava most other people did as well).
For $15 this race was hard to beat for the price.  Despite my complaints, I was happy with my experience and it was great to see so many people I knew there.  It was a welcoming event even if you weren't LDS or an alumni as well.  I'd definitely run this one again if it fit in my calendar.