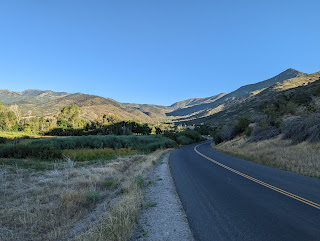 As usual, my Labor Day tradition involves running the Swiss Days 10K race.  I've been running this race consistently since 2016 and year after year it continues to be one of my favorite events of the year.
It is tied in with their Swiss Days celebration -- lots of food, a parade, vendors, and a cultural event celebrating the original settlers to the Park City / Heber / Midway area.
The 10K is usually well attended and competitive and the course is absolutely stunning.  There are beautiful morning views of the farm lands, the Wasatch mountain range, and beautiful houses along the way.  It isn't for the faint of heart.  The course is hilly and the altitude is slightly higher than Salt Lake City - hitting an apex of 5900 feet. 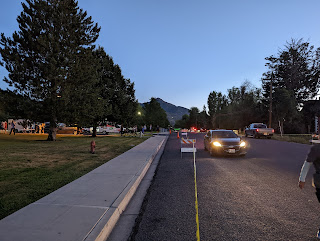 The race starts early -- 7 AM.  It is chillier on the eastern side of the state -- resulting in a start temperature of about 45 degrees.  There was no wind and the race started a bit after 7 AM with the sun poking over the eastern horizon.
This isn't a chip timed race and it was a free for all once the gun went off.  It actually started with little fanfare -- people just started running.
The race starts off with a short downhill and then a quick right along the fairgrounds. I've run the race a few times now and my strategy was to take the first mile at a solid clip.  I was largely successful at hitting the first mile in 8:16.
The race was populated with a broad range of runners: from high school kids to adults well into my age category.  I figured I had my work cut out for me as I eyeballed potential competitors. 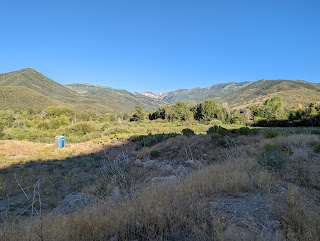 I was still holding back on mile 1.5 to 2.5.  I knew we had a series of hills that culminated with a short but steep one.  There would be a turn around the race would really begin for me.  You get to run down the hill you just ascended and then get a gentle and gradual drop back to the finish.
As soon as I hit the flip side I found my next gear. 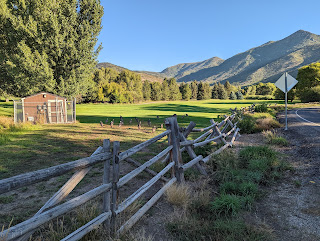 The next mile of the course is absolutely stunning.  You pass by the main entrance to the state park and you are greeted with a golf course, an old wooden fence and just a beautiful countryside.  Fortunately, I was able to drive back to this section of the course and take some more photos. 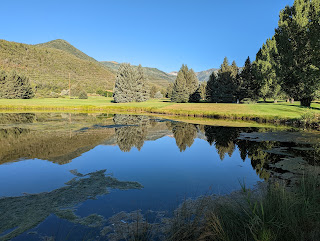 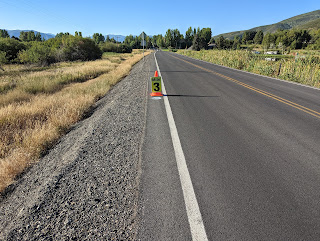 Mile 3 and 4 saw a fast decline - particularly around mile 4.  I almost felt guilty about effortlessly flying down the hill with the eastern sun blinding me, but I had earned these fast miles.  I actually felt great.  Despite a string of less than great races could I finally rebound on this one? 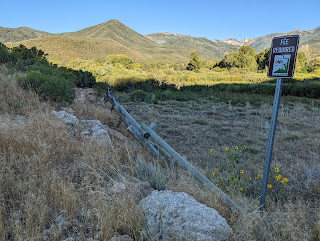 I was working with a couple of other runners, one who I suspected was in my age group.  He was coaching another runner and talking with one another.  Come on -- talking -- in a race?  I could barely muster a few words.
But it was nice to have the company and someone to work with.  Occasionally I'd want to pass them, but I couldn't sustain an effort.  I kept telling myself to be patient as the downhill section sadly ended. 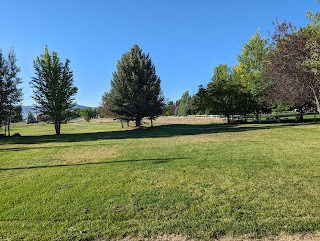 Around the start of mile 5 we hung yet another right turn and were dumped into a park with a paved, twisty trail down the middle of it.  I knew I was in the home stretch now and I kept glancing down at my watch. How much further?
The final mile and a quarter is through the park and then up a quiet country lane before making a final left turn for the final half mile sprint to the finish. It is a slow uphill again, but nothing too serious.  You really have to dig deep though as by this point you are hurting, you don't have the benefit of the downhill.  I keep focusing on turnover and trying to save something for the final push to the end.  I was a little dismayed though to see the result of my mile: 8:27.  I really felt like I was running an 8;10 - 8:15. 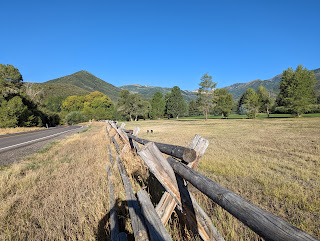 I still had some company with a few other runners as I made the final push to the end. I had a nice turnover and I was pretty close to a 100 second final quarter mile.
The 2 guys that I was working with got the best of me and I just didn't have enough to attempt a crazy blast by them and I crossed under the RunnerCard banner in just a hair under 51 minutes.

So the good news is I did better than the 10K I did two weeks ago.  This course was at higher altitude and hillier as well.  I felt really strong throughout and I felt like I had raced it well.
The bad news was that they changed the age groupings.  In the past, they awarded nice glass steins in 5 year age increments, 5 deep.  This year, it was 15(!) year increments with a smaller stein.  Womp womp womp.  I finished 8th, just missing 7th by a few seconds (I was correct, the chatty guy I was chasing was in my age group).
If I had run the time I had run last year (49:55) I would've finished 5th, netting an award. 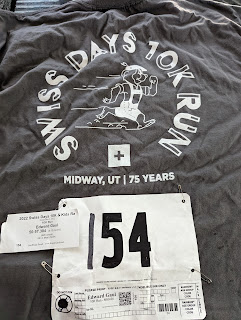 Overall, I was very pleased with my time though.  It's been a struggle since my injury / sickness and smashing this course was a positive in my book.  As I was running it, I felt like it might go down as the race of the year for me.  It is still a contender for it. 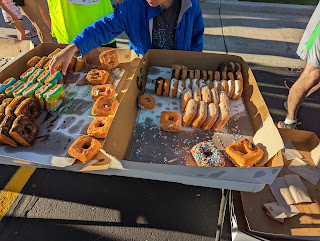 Post race refreshments were donuts (Yum!), fruit, milk and drink.  I love the donuts and that is one of the reasons why I keep coming back to this race.
The shirt is 100% cotton.  I'll use it for short runs and I like the design but I just don't usually like cotton shirts for much of anything.  It was a general gripe amongst other runners I spoke to.  People like the 100% polyester ones and as seen by my picture, I still wear the 2018 edition. 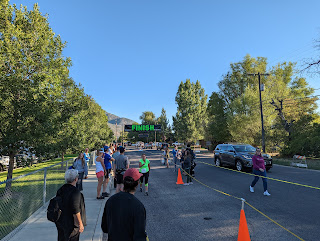 So I paid about $35 for the race. I love this race, I really do. The course is probably my favorite 10K course I've ever done.  But I do feel a bit slighted with the crappy age group divisions.  If you are gonna cheap out on those at least provide a finisher medal / ribbon as a substitute.
However, I have no reason to complain. I love this race, love the course and the process of getting your bib, registering and finding out your results is a snap.  Easy in and easy out.
I'll be back next year -- with a vengeance!