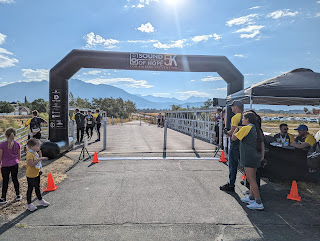 With no races on the docket for this past weekend, I was a bit perplexed with what to do.  Fortunately, some quick Google searches yielded one that was fairly local to me: The Sounds of Hope 5K in Riverton, Utah.
This race is about suicide prevention and the money raised from it goes to assist those in need.  It was reasonably priced and something to do.  With less than a 15 minute drive away, it made sense to give it a go.
Plus, I was looking for a flat and fast 5K to see where my fitness was at. 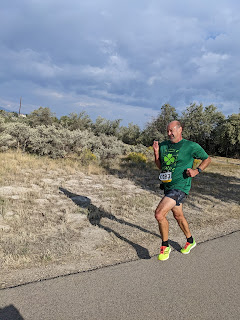 The race started at 9 AM, which gave me ample time to start my day and get a bit more food than usual down.  I rolled into the race site just shy of 8:30 and picked up my bib.  They had it well crewed and low fuss and I was ready to begin my warm-up. 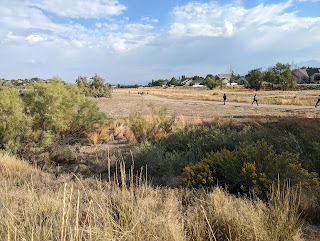 I am always skeptical of race organizers I haven't run with before, but the organizers on this race did a great job.  It started on time, and the course was well marshalled and marked.
The race was held at Roi Hardy Park, a trailhead for the Jordan River Bike Trail.  I had run by the park many times on other races and I knew the area was flat and fast.  The trail is paved and is used by many races in the area. 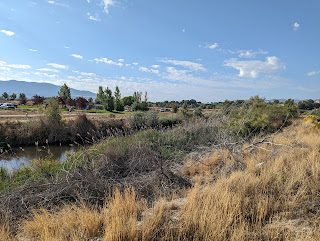 The race started on a pedestrian bridge and quickly hung a left to go north.  I didn't realize it at the time but there was a  pretty stiff breeze coming from the south. 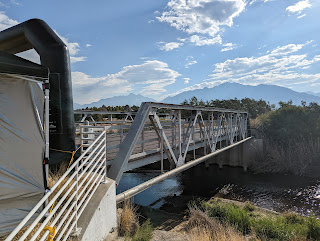 There were several hundred runners in the race -- definitely a good turnout.
I was passed by about 20 runners almost immediately.  I was okay with that.  I had studied the awards system and I hoped that they would have an age group system, but they were only awarding top 3 overall, so my chances of double medaling for the day were dashed after a 100 yards.
None the less, this was a 5K time trial for me and I cruised the first mile in 7:43.  I was feeling strong but I knew that had been a fast mile.  I had done some speedwork only 2 days before and I could feel a little stiffness in my legs.
I hadn't run this course before but the first mile marker was spot on.  I was curious as to when the turn around would be.  Around 1.25 miles the lead were cruising back towards the start.  I figured I was in the top 20 or so.  Not too shabby.
The turn around came at exactly 1:56 miles.  At that point I breathed a sigh of relief.  I always worry about the course being too long or short and to see my Garmin read exactly where it should be -- big score for the race organizers from me.
The turn around came after the first aid station.  It could've been marked a bit better (with a cone) but overall it made sense.
Upon turning around I was greeted with a pretty stiff wind.  Where had that come from?  I was pretty gassed but still running strong as I received encouragement with the runners who were still headed out to the turn around.  I hit mile 2 with an 8 mile split.
I didn't have much confidence I was going to be able to hold the pace.  I tried to tuck behind a trio of young adults I had been running with but they were pushing the pace and I just couldn't get in behind them long enough to get any benefit.  The wind wasn't super terrible but it mentally it was a bit tougher for me. 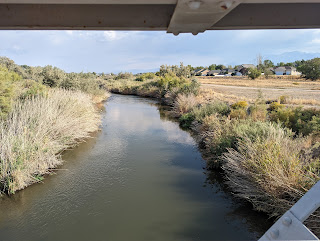 My pace was sputtering at this point and I knew any hope of crushing this race today weren't going to happen.  The trio of runners I was working with put quite a bit of ground on me (I did manage to run in with one of them).  Fortunately there wasn't anyone behind me hunting me down.
I hit the third mile in 8:30 -- very disappointing for me.  I definitely didn't have anything left and I just wanted the race to be over.  I also made the mistake of starting my "sprint to the finish" too soon and ran out of gas 20 yards from the finish.  Oops.
But I did cross under the arches in just over 25 minutes.  Fairly standard for me these days for a 5K. 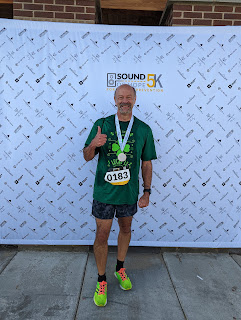 So my time wasn't what I had hoped for.  I really came into this run feeling like I was going to have a breakout race.  But I think at the starting line I didn't feel like racing.  All the positive energy / anticipation, I had built up during the week vanished at the starting line.  Was it because there was nothing on the line?  Was I tired?
I had slept that great the night before and to be honest, I just wanted to take a nap.  My energy level wasn't there despite being caffeinated up.
I gave it what I could and for the first 2 miles I ran well.  As per usual, the final mile is always my dream killer. 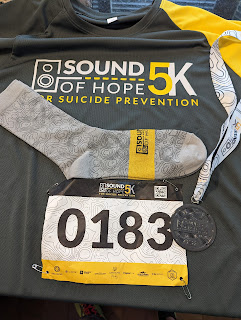 So the award system was goofy.  First through third for teens, first through third for adults by sexes.  And then top 3 (mixed sexes).  So the top finishers got to double dip.   I really wish they had had age group awards.
The swag bag was incredible: a beautiful shirt, a medal, timed race, socks and even a portable phone charger.  Post race refreshments included water, chips, fruit gels, and granola bars.  I was really happy with the value received on this race.  The bathroom situation was fine -- using the bathrooms at the park, but if this race gets any bigger, they'll need port-a-potties.
Overall, I ran this race nearly identically to the Roy Days 5K that I did about a month ago.  Same distance, same time.  Not sure which race I ran better -- probably Roy Days as that is a hillier course.  So I was a bit disappointed I haven't made that much progress but I don't think I was on my A-game today. 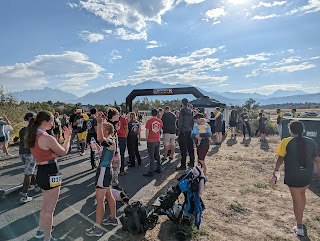 I'd definitely do this race again despite the lack of awards.  The money raised went to a nice charitable organization, the course was fair (even though I've run it several times over the years).  But the post race goodies and swag bag were top notch.
I just hope I am in a bit better shape next year.