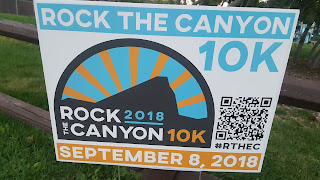 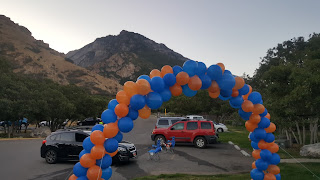 A friend of mine turned me on to this race.  The race calendar for this past weekend was kind of light so my choices were sort of slim.  I haven't really felt "half marathon worthy" of late and so a shorter race was what I was looking for.

I heard the race was fairly hilly but how bad could it be?  Well I would soon find out. 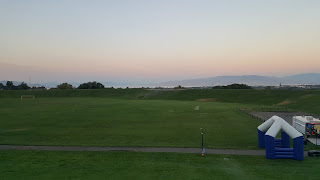 
The race was held on the east side of Provo in a park called Rock Canyon Park.  The park is mainly a multi-use field nestled at the base of the Wasatch Mountains.  It sports beautiful views of the mountain range as well as Utah Lake.

The race actually served as a circuit race for the Salt Lake area.  To say there were fast runners there was an understatement. 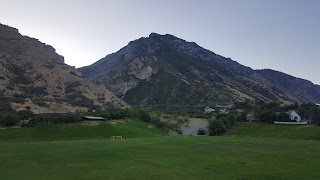 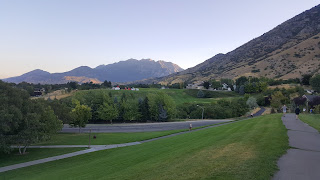 I got there with plenty of time to spare, and grabbed my shirt and bib and basically killed an hour waiting for the race to start.  I circled through the bathroom and did my warm up drills as I admired the 360 degree views.

I hadn't run that much during the week so I figured I'd be spunky to race, but I was anything but that.  I just wasn't in the mood to run / race.  But I had paid my race entry and I've always had pretty decent races when I've run through Provo.

The race had a really decent turnout, in part that it was a circuit race.  Minutes before 8 AM we assembled in the parking lot, got some brief instructions and soon we were off.

Almost immediately I was gasping for breath.  I was cursing myself for not doing a more comprehensive warm-up.  I also attributed it to being at slightly higher altitude.

I was almost thankful when the trail we were on narrowed down so that only 2 or 3 people could run abreast.  Naturally this forced everyone to slow down.  The break was short lived but it was enough for me to re-group upon hitting the road.  It didn't help either that the start of the race was an up-hill as well.

Upon hitting the road I was able to dial in a pace and soon I got to enjoy the first down hill section of the race. I wasn't surprised seeing my Garmin flash a 7:30 mile.

I knew I was right on target pace-wise on account I was tailing a woman I usually finish about even with.  In fact, throughout the race I was within 20 - 150 yards of her.

I was enjoying the race quite a bit.  It was all new territory as well ran down the hill.  I turned to a woman running next to me, though and stated that we were going to pay for it on our way up, though.

Mile 3 was a gut check.  We were entirely down with the downhill section and now we had a section that involve a little bit of uphill but mostly flats.  My quads were pretty shot and my legs weren't feeling that responsive.

I wasn't too surprised to see my pace drop from speedy to a fairly pedestrian 8:30 pace for mile 3.  And yet, I knew I had the hardest section of the course coming.

Mile 4 was a climb and while it wasn't that bad I figured maybe the rest of the course would be like this.  But I had studied the map with the elevation profile and I knew the worst would come.

The race was held primarily on residential streets.  Some times we ran on the side of roads and other times on the sidewalk.  There were police at important intersections and the occasional volunteer at quieter ones.  I was rarely in doubt of where to run because I was always within eyesight of someone and they had placed markers that led the way.

Mile 5 through 6 was where the insanity started.  I turned a corner and there was a monstrous hill.  Me and the runner next to me both were like What the Heck...it was steep and other runners were clearly running up it.  This race was cruel... at mile 5 of a 10K you put a monster hill?  Come on!

I ascended that at a shuffle -- hurting every step of the way -- only to turn a corner and find another hill.  I almost came to a walk as I saw many other people do in front of me.

I kept looking at my Garmin in hopes that I would reach mile 6, when I pretty much knew that the hills would be over.

Finally mile 6 came and I knew that I was now close to being done.  There was a good down hill here and I knew once I entered the park.  In fact, I totally got a second wind and flew to the finish line. 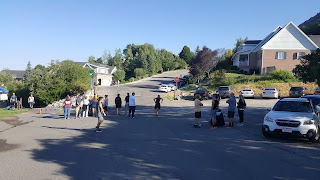 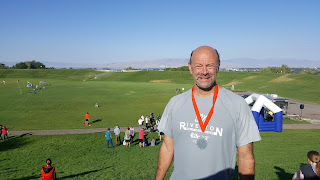 I wasn't too surprised with my lackluster time.  I figured I'd hit about 55 minutes given the difficulty of the course.  Even some of the elite runners there said don't worry about your splits as this course was anything but flat.

Finisher's refreshments were water and bananas.  They had some pancakes, but after the run, they didn't seem very appetizing.

Results were printed out and easily obtained.  Unfortunately I placed 4th in my age group.  They may have done top 3, but I basically cleaned myself up and took off. 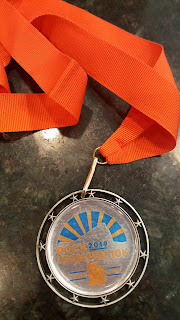 Hard to have any take-aways on this race.  The course was really fun to run believe it or not.  They also had 3 water stops, it was properly marshalled and the course was fairly accurate.  The mile markers were pretty close to spot on but as the race went along I was coming up short.  I had hopes that it might be a little short but actually it turned out to be a little long. 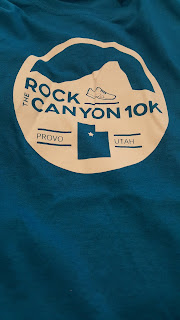 The shirt was a standard cotton one.  It was nicely designed but I probably won't wear it much.  (What has happened with tech shirts of late?)

I would do this one again.  It was a little expensive -- about $40 plus the usual service fees and taxes but I registered fairly late in the game.

If my race schedule was empty, I'd run this one again.  It was well organized and definitely challenging.  But this race isn't for the faint of heart... or those looking for a PR.  The course though was top notch though.
Posted by Eddie Gaul at 9:06 AM