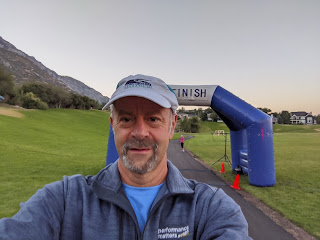 Last year, I ran the second edition of the Rock the Canyon 10K, at the base of the Wasatch Mountains in Provo, Utah.  The race struck a cord with me and while it certainly wasn't my best race, it was definitely a challenge.  In short, this race has some serious hills.
Last year's race took us from the east side of town to running by BYU (west side) and then coming back up to the east side.  The first few miles were fast, then flat and finally all uphill in the final miles.
This year had some changes.  Instead of running west (primarily) we went north.  Very little of this year's race was identical to last year's.  So it was yet another way to explore Provo and see the sights, and most importantly get out of the house for a t-shirt, finisher's medal and bananas!

I rolled into the race site, at Rock Canyon Park, at about 6:45 AM for a 7:30 AM start.  Packet pick up was subdued and of course socially distanced and with masks.  I snagged my goodie bag and t-shirt and bib and warmed up.  Despite our warm summer, it was a chilly -- almost perfect morning for a run.
The race assembled at 7:30 and I lined up in the back.  Being that it was chip timed and Covid-19 a real threat, I figured I'd have the same strategy as the last week's Pun Run: let everyone start off and I'll chase everyone down.
Last year there were some very serious (i.e. fast) runners at the race.  This race's attendance was significantly down from last year, but there were still plenty of speedy runners and I watched them put some serious distance between myself and the rest of the pack.
The first half mile was brutal.  "What did I sign up for?" kept echoing in my head.  We had to run up a quick service drive, then flat and then up another hilly service road which led us to a dirt trail.  Normally my first mile is the fastest -- this one, not so much.  It was humbling.
Once I got onto the dirt trail, however, my breathing settled down and I was able to pass some of the runners.  It was time to make up a little bit of time.
We had put up a bit of a climb and we were treated to some beautiful views of Utah Lake and the Provo Valley from the trail vantage point.  This is why I came to run, I told myself.
Mile 2 got us on a sweet downhill.  I had settled into a decent pace at this point and while I knew there were hills to come, I used a little extra energy to take advantage of easy running. 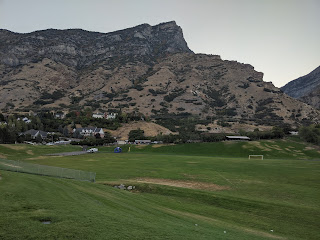 The course was well marked with cones.  There weren't a lot of volunteers on the course but there were ample cones and road dots to indicate where to go.  I was worried about not finding my way around given the thin number of runners and my lack of familiarity with the area but I was never hurting on where to run next.
The course, other than a stretch on the trail, was primarily on surface streets surrounded by million dollar houses.  It was such a treat and the scenery was so pleasant.  There also wasn't much traffic so despite the rolling hills, it was fun to run.
The middle miles were fairly flat and while my legs were pretty spent as a result of running two previous 10Ks in a week, so I didn't have quite the get-up and go I was hoping for.  I was trying to chase down a few women in front of me and I couldn't see anyone chasing me down, so the urgency to really push it wasn't there.
One very interesting part of the course was the turn around.  We reached a point and then turned around and ran into a tennis court area.  The issue was that we were at the top of a hill and you took a series of paved switchbacks to the tennis course and then ran around the tennis court and then climbed back out!  My legs felt like Jello on the way back up.
The final mile and a half were flat or downhill.  My pace which had been lackluster suddenly picked up.  I know I wasn't going to get a PR on this race, but I wanted to beat last year's time -- even though this course was entirely different from that one. 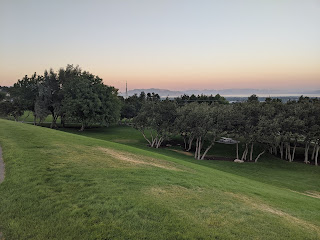 Finally the park came into view and last year we simply entered the park and ended.  This year, however, we had to run a lap around the park and then drop down into the park and finish  The woman I had been chasing had pulled ahead of me and try as I might I wouldn't be able to catch them.
I cautiously looked behind me and there was a runner, about my age, a hundred yards behind me.  He was moving in quick.  Part of me knew he had me and he was no where near me when the race started (it was chip timed) and likely started behind me.  But I was going to give it a shot to not let him pass me.
I tried to get my legs to go faster but I couldn't go any faster. My legs were rubbery and I just wanted to be done.  I almost wanted to weep when the runner passed by me with 50 yards to go.  Hopefully he wouldn't cut me out of an age group award.
I crossed under the finish line in a hair over 55 minutes.  Definitely faster than the high 56 minutes from last year.  I was wiped out but I was thrilled to have taken time off last year's time and conquered the canyon. 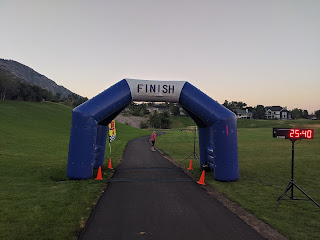 After the race, I wound up walking off the haziness and stepped aside to recover.  I had a small flask of water I had carried, that I sipped from now that the race was over.  Since Covid has begun, I have been bypassing the water stations.  Just out of an abundance of caution for myself and the volunteers.
I wasn't dehydrated by any means given the cooler temperature, but once I felt up to it, I went to the relief area and grabbed some cheese sticks, chocolate milk, and a pair of bananas.  They had a pretty nice spread of snacks but it wasn't quite the same without the pancakes.  Once again, another victim of Covid. 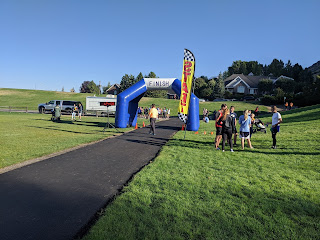 Once again, I was pretty happy with my performance and it would appear I won my age group in the 50 - 54 age group, but 3rd in the 50 - 59.  Either way, an age group award (just need to pick it up down in Provo).
This race was well organized.  There were volunteers at the age stations and at tricky locations throughout the course.  Despite all the turns, I never felt lost or unsure where to go.
The course did appear short however.  I am okay with that though.  This isn't really a PR-worthy course so I was there just to get out and run. 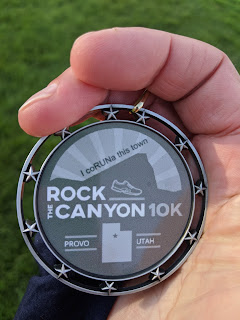 The medal was ho hum but to be expected.  They upgraded the t-shirt from a cotton one to a technical one, so I'll definitely wear it for other runs.  I paid about $40 for the race (about 3 weeks from race date) and I felt like I had gotten a good bargain.
I enjoyed my time and was one of the last to leave.  I was totally tempted to re-run sections of the course to get some pictures of the hills and views.
This race will certainly come up for me again to run next year and if my calendar is clear, I'll definitely be there.
Posted by Eddie Gaul at 12:37 PM