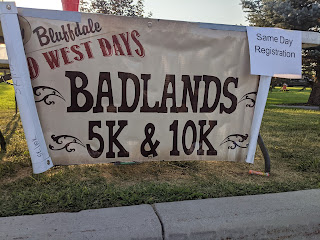 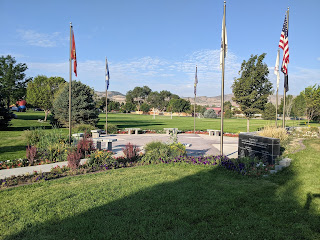 The last few summers my race card has had an entry for the Bluffdale Badlands race.  It is one of the few races in the middle of August and it is very affordable.  Pre-registration is around $15 and that includes a shirt, a shot at an age group medal and finally a pretty nice pancake breakfast.  It's hard to find these kinds of bargains in the race world so it always makes the top of my calendar. 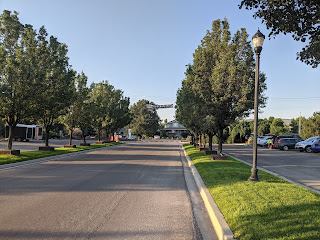 I got the race site -- at Bluffdale City Park at about 5:45 AM for the 6:30 AM start.  I arrived just in time -- grabbing a decent parking spot and avoiding a rapidly growing line to get my bib.  Fortunately, they were really organized this year and getting my bib wasn't a big deal at all.
I wound up doing some drills and a very brief shake out run before the race.  It was already pushing 70 degrees so I just needed to feel loose and get the heart rate elevated a bit.
The race started at 6:30 and we were off.  Within 60 yards we separated from the 5K runners by hanging a left - the 5K runners hanging a right.  It's been 2 years since I've run the course and the memories of the 2018 and 2019 editions came flying by.
I was feeling pretty good and kept my pace in check.  I knew the first part of the race was going to be hilly.  I should've studied the course before the race but I tend to underestimate the hills at the start of the race. 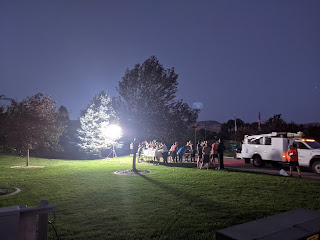 I was a little shocked to see an 8:24 show up on my Garmin for the first mile as I flew down the residential streets of Bluffdale.  Definitely not where I wanted to be.  But I was patient and I knew that the first mile was a little hilly and that I'd get it back on the 2nd half.
I was running with a small group of people.  I wound up passing a few and I was trailing a larger pack.  This race is fairly small -- 50 runners for the 10K.  Part of me worried about getting lost.  There are a few turns throughout the course and I don't know my way around Bluffdale very well.  Fortunately, the organizers had the route well marked.
Mile 2 gets a lot tougher.  It is a grind up a very long hill.  You can see in the distance where you'll turn right but it is hard to not start to panic.  I was dismayed to see an 8:47 on my watch.  So slow? So early in the race?  Could I regroup? 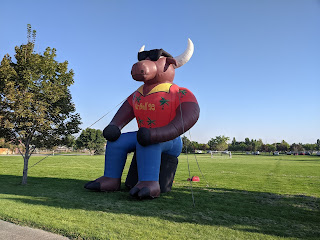 The tail end of mile 2 sees the first real down hill but it is quickly followed up by a section of uphill.  I had also rejoined the 5K runners and it was sort of motivating to pass by them.  Mile 3 was a mix of downhill and uphill but my time seemed molasses slow -- 8:33.
The start of mile 4 saw the start of the downhill section.  There aren't any screaming fast sections on the course but this might as well be it.  I focused on turn over and just making up some time.  I was thrilled to see a sub 8 minute mile.  Redemption!  Could I salvage this race?
I was remembering a lot more about the course and once I hit the 2nd aid station. I pretty much knew where I had to go at this point and what the rest of the course was going to be like: flat with a slight downhill finish.  I knew I wasn't going to hammer anymore exceptional miles out, but if I could just hit some very low 8 minute miles, I'd be good.  I looked behind me and there was no one within a half mile.  There were a few people ahead of me but they had at least a quarter mile on me.  I figured I had a reasonable shot at and age group award but was worried about a guy who passed me early in the race and that I would hope to catch.  I was just working on chipping away at the lead the other runners had on me.
In my mind, I had remembered the course as just being over 6 miles.  However, that memory was from 2018.  In 2019, they made a change due to construction and it wound up shortening the course by at least a quarter mile.  Would the race be the same as this year? Would they have fixed it? The race's mile markers had been significantly off from the get go.  They were consistently off by about .13 of a mile and then over a quarter of a mile. 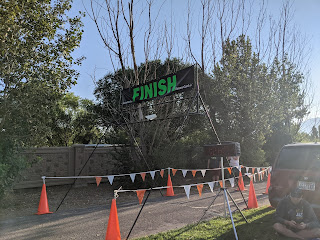 Sure enough the race was exactly like the 2019 edition -- short.  I turned the final corner and expected to make a turn around an outdoor arena for another quarter of a mile, but saw that it was definitely not the way to go.  So I cruised towards the finish, with a well short 5.8 miles. 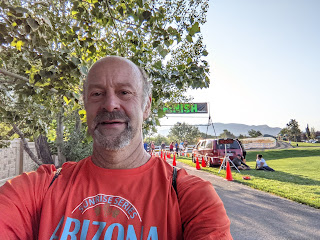 Okay, this course was well short -- by nearly a half mile.  Calculating out my time, I am finishing around 52 minutes for a full 10K -- about where I want to be.  So by all accounts, I ran about where I wanted to be.  And this course, in my opinion, isn't a terribly fast one, with over 250 feet of hills.
Upon crossing the finish line I grabbed an ice cold Gatorade and waited a bit for my result.  RunnerCard was providing the timing and my card said I was in 3rd place in my age group  Finally! An award at this race (they have VERY wide age groups -- 51 to 70).
It turns out that I finished 4th.  A late registrant wound up placing 3rd so the results weren't entirely accurate when I finished.  I am working on getting him his medal. 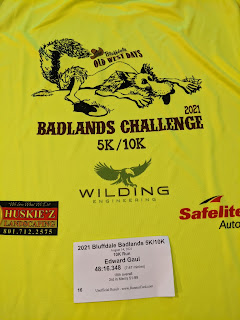 I walked off the fatigue and got some pictures of the park and finish line.  I wound up grabbing my pancake breakfast -- which was decent.  I'll never turn down free pancakes.
So at first I was really disappointed with my time.   I had vague memories of finishing the course much faster in 2019.  However, when I got to my car and looked up my time from 2019 I was thrilled.  3 minutes faster!  And on the same course.
So overall, I was pleased with my race.  For $15 I got a nicely organized event with a tech shirt and pancake breakfast.  I'll continue to put this on my race calendar and it was nice to see the event back this year.
Posted by Eddie Gaul at 1:36 PM