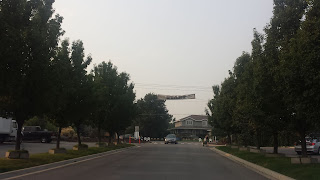 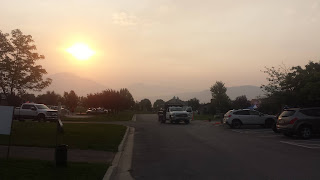 The other day I was looking for a race to do and opted for the Bluffdale Badlands challenge.  I've seen this race pop-up every year and I've just never made it there.  It's only a few miles down the road but for whatever reason I have never signed up for it.

I looked at the price and figured wow, for $15 I get a t-shirt and a race?  So why not?  Plus it satisfies my goal of trying some new races. 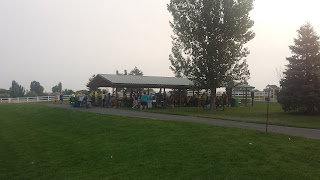 
I rolled in around 5:45 for the 6:30 start.  I have seen the results from previous years and it is usually a small race.  I suspect, also, that the smoky air from all the wildfires in the area also scared people off.

I live about 15  minutes north and the air quality wasn't too bad.  Down there, it seemed a lot worse.

I grabbed my shirt and bib and basically went back and forth to the bathroom for the next 30 minutes.  The race headquarters were at a park where the city fair was going to happen so there were a ton of bathrooms and no waiting at all.

It was pretty warm and there was a stiff wind.  I knew this wasn't going to be an "A" race from the get-go on account of the air quality.  Still, I figured I had a shot at the age group awards, which were awfully wide.

The race started on time.  I was a little worried about where to go on the course.  When races have less than 40 people, the racers tend to get thinned out and if the course isn't marked well, it is easy to get off course.  Luckily, with one exception, the course was well marked with signs.

The race is held primarily on residential streets.  I am pretty sure at one point this was a "Badlands" but now you are running through city streets that can't quite make up its mind on what it is.  There were all kinds of houses with horses in the back and some farm-fields.  It was kind of interesting, but not super glamorous.

The important intersections were marshaled by the police though and I saw volunteers on golf-carts cruising the streets looking for people to help.

It was a tough start.  Almost immediately I was running into a wind and going uphill.  I also found myself sort of running alone.  The fast group clearly had pulled ahead and I was working with a few guys and a young woman. 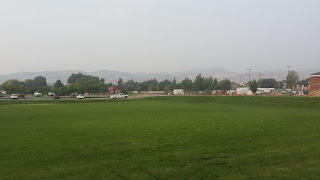 I was a little dismayed at my pace.  I had no clue as to what the rest of the course was going to be like, but I certainly hoped I'd be able to improve my average pace.  9 minute miles were more akin to late half marathon paces, not for a first mile of a 10K.  We did join up with some of the 5K racers as well but they were the slower bunch but it was empowering to pass them a bit.

Eventually I got my wish and got some downhill followed by some tailwind.  It was awesome.  I suddenly made some gains on the people I was chasing and my my turnover greatly increased.  I hoped I was done with the hills and I could maintain this pace.

Suddenly, I found myself leading the way.  I was fortunate to have someone ahead that I could follow and use them to prepare for a turn, but now, I was running solo.  I had some people following me though.  I figured I had a chance of an age group award at this point -- if only I could hold on.

Around mile 5 two of the guys I had passed, passed me.  I just couldn't respond and my legs and my breathing was labored.  I was under the mistaken impression that the age group was 35, not 31 and these guys appeared to be in that age group.

I dug deep though and worked on getting more turn over on my legs.  I kept telling myself, just a few more quarter miles.  The mile markers were also off, according to my Garmin by about .07 of a mile so I figured the race was going to be short.

I wound up passing one of the guys at the end.  He was cramping and I felt bad because he probably had me beat.  The other guy missed the final turn and just kept running.  In fact, this was the only fault of the race.

The service drive we were supposed to turn onto didn't have a sign or a cone near it.  It was spray painted with orange paint that indicated a turn.  It led into the park and we were told we were supposed to take the service drive but the other runner in front of me had gone straight.  Darn it.  I turned around to the folks chasing me down and asked if we turn here?  They didn't know.  I figured, okay, I am going to turn here... and they followed.

Luckily it was the right thing to do and in short order I saw the 6 mile marker.  It too was short by .07 so the final stretch was an eternity.  I hauled ass here as I ran around the park's service drive (which was under construction in spots) and flew through the finish line. 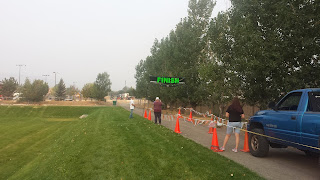 
The race was timed by RunnerCard and almost immediately I was handed a card with an apology that I just missed an age group award (I was 4th).  The awards were given with little to no fanfare.  Just cross the line and if you won something they handed you a (cool) medal.  If not, better luck next year.

I congratulated and thanked the runners around me.  The one girl and I had raced almost the entire thing and the cramping guy was happy to finish right behind me. 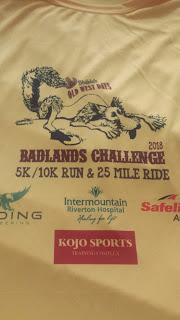 They had a pancake breakfast and I wound up chatting with the winner of the race.  Pancakes, Tang and some hash browns.  I was surprised it was free.  I mean, I paid about $17 for the race -- and I got a free breakfast, race results, and a t-shirt?  It was a steal.

Course support was okay.  I think there were two, maybe 3 water stops.  It was warm but the stops were present and easy to access.  My only complaints were the wide age division awards (a little tough competing with people 15 years younger than me) and the final turn to the race.

I liked the course actually and for the price paid, I had a good experience.  I would do this race again.