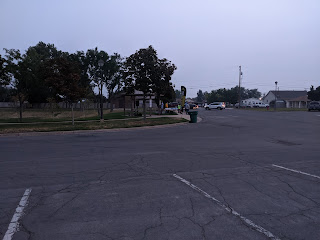 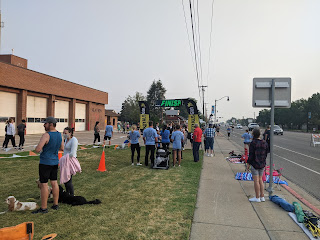 Back in 2019 I did the Roy Days 5K.  It was a small community event celebrating their city and it's special weekend.  It was heavily participated by local high school folks (I think the race director had some connection to the team). I managed to eek out an age group win and since then the race has come up as largely a good memory.
So I was excited when this year it came up on the calendar and I pulled the trigger and signed up.  I definitely could use a 5K as well to see where my fitness stands. 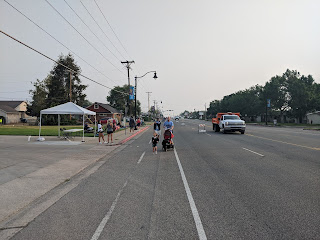 I got to Roy (about 45 minutes north of where I live) a little after 6 AM for the 7 AM start.  I think I was one of the first to collect my swag bag so packet picket was easy as it could be.  I managed to kill about 30 minutes and then began a very limited warm-up.
California has produced some really strong wildfires.  The smoke from the fires drifted into the Salt Lake Valley Friday morning (the day before the race) and it left the valley in bad state, with campfire smoke enveloping the entire area.  To say the least, running outside is ill-advised at best and probably not very healthy.
So I was a bit hesitant on showing up for the race at all.  But it was simply a 5K, I paid for it and I wanted to get it done.
The race started about 5 minutes late, but all was good.  My warm-up had been brief but I knew once I got going I'd feel good.  I had done a bunch of dynamic drills so I was loose and ready but my actual running preparation was minimal.
The first thing I did notice after starting was that I had to go to the bathroom.  Fortunately the kind I could hold.
The first mile is fast.  It is slightly downhill, I was fresh feeling,  tailwind and I was feeling pretty good.  It has been 3 years since I traveled down the streets and a lot of memories were coming back as I cruised down the residential streets.
I was amazed at how many fast runners.  I don't consider myself blazing fast anymore (if I ever was) but I was immediately swallowed up by all the young runners.  As stated in the introduction, a lot of high school aged folks were there and I was quickly left in the dust.  It made me want to just give up.
But I kept going, knowing I had to at least beat some of the whippersnappers and make a showing for my age.  It took a bit but I got into a groove and flew through the first mile in 7:30, still feeling good.
Mile 2 sort of leaves the residential streets behind and you you come to a community park, wrap around it (on surface streets) and then head east to make it to the "Main Street" of Roy.  This mile is mostly flat and there isn't a lot to look at.  I was still moving pretty well and keeping up with the folks I had started with.
Mile 3 is where the race gets tough.  You can see the finish line way in the distance -- evidenced by the flashing police cars.  And it sits at the top of a hill.  The hill is a steep one, but fortunately not terribly long.  Mentally it is just tough... I kept looking at my watch as if to think maybe I don't have to run it, but I know I do.
Fortunately the hill doesn't take too long to get up, but it will leave your legs feeling a bit like rubber.  I didn't want to glance too much at my watch, but I kept telling myself to hang in there a little longer.  I was imagining workouts I did with half a mile or a quarter mile left to go and knowing I could handle the pace.
Finally I got up the hill and crushed it to the finish.  I wound up passing a few people in the very last part and crossed under in 24:15. 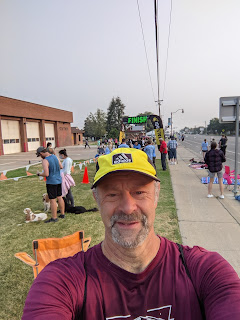 I actually felt pretty good when I finished.  The smoky air hadn't bothered me at all and I felt like I still had something to give when I finally stopped running.
Post race refreshments included bananas, water, Gatorade and granola bars.  Pretty basic, but for a $25 race, I wasn't complaining. 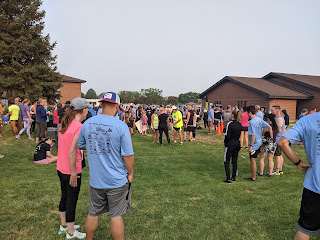 This race also gave out age group awards, which included picking out a prize from the give-away table.  I wound up snagging an extra t-shirt (never can have too many).  No finisher's medals on this one, which I am okay with.
The awards were handed out in a reasonable pace.  I was a bit crestfallen -- my RunnerCard said I had won my age group, but for some reason I had finished 2nd.  Not the end of the world, but I had had hopes that I wouldn't won. 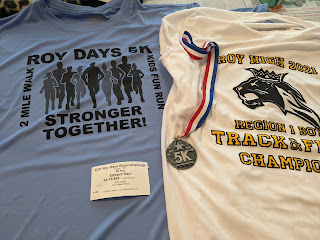 So this was my "A" race.  I think the air quality may have spooked me a bit and I didn't come in with my guns ablazin'.  But I did okay.  It is on par with other 5K races I've done this year and the sub 24 minute 5K will come this year -- just not at this course.  I am still happy though, that I beat my 2019 time by a minute.  So signs of improvement continue.
The 5K continues to be a challenging race.  I really enjoy it.  It is over pretty quickly and I have plenty of endurance to cover the distance.  I need to continue to dial in that mile 2 to 3 area where I seem to fade or forget that I am racing.
I really enjoy this race and I hope to toe the line in 2022.
Posted by Eddie Gaul at 11:23 AM