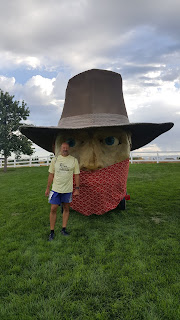 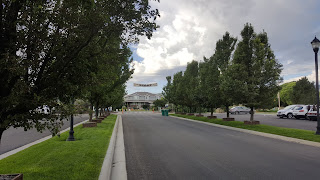 
I registered for this race a few weeks ago -- as I was looking for something to do and I remember doing this race last year.  It is one of the best bargains as far as races go -- for a little more than $15, I got a breakfast, a race, and a shirt.

Unlike last year, when there were a ton of wildfires making the air almost unbreathable, this year the air was pretty clear and the temperature was actually decent -- a low 70 degrees.  This race also starts at an ideal time: 6:30 AM, when it is just turning dawn and the air is comfortable.

The race is also located about 20 minutes away from my house and I just remember having a decent experience last year.  So I figured why not, I could at the worst get in a decent tempo run and a t-shirt or I could have a really great race. 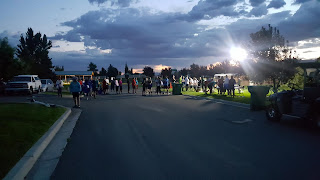 I rolled in just shy of 6 AM for the race and I noticed a lot of people milling about.  Apparently the bibs / shirts hadn't arrived yet.  Uh oh, not a good sign...

I passed the time for using one of the copious porta-potties and by the time I got out, the shirts had arrived.  So I snagged by bib and killed another 30 minutes or so before the start of the race.

During my warm-up I totally didn't feel like running, let alone racing.  I think I was just tired and had a case of the Saturday morning blahs.  So I was a little apprehensive about my whole experience.

The race started prompt at 6:30 and I was off.  I dug deep and told myself to just hang in there and do my best.  If anything, it would be a solid speed workout.

I remembered the course being an honest one from last year.  There were equal amounts of downhill parts as well as uphill.  I also remember the course as being kind of fun -- for a residential run that is.

The first mile is a little bit of an incline.  The lead pack clearly took off and I broke ranks from the back of the pack and I found myself clearly in the middle.  In fact, for most of the race, I only had the 3rd place girl in sight in front of me and hardly anyone behind me.

The second mile was definitely the hardest.  It is primarily uphill.  It isn't a crazy uphill where you are tempted to walk, but just a death by a thousand cuts kind of hill.  When I reached the summit, I took a quick look over my shoulder and yeah the sum of it was significant but luckily it was spread over nearly a mile.

Finally at the summit, I was able to rinse my mouth out at the first aid station.  And I also got a nice stretch of downhill.  I was able to really start to cruise here and my pace increased significantly.

I was feeling a little tired / beat up midway through the race.  I certainly wasn't feeling 100% and I began to panic a bit that I was going to have a crappy race.  But I was giving it all I had.

The next 3 miles of the race was a fairly lonesome experience.  Again, I was chasing the 3rd place girl and occasionally I'd look over my shoulder to see if anyone was gaining on me, and no one was behind me.  The course was marked well and I remembered large sections of it last year.  At the important intersections there was a police officer, but Bluffdale is a pretty quiet community.

This year, at the final turn they had someone marshalling the final turn into the park.  Last year, there was a very light chalk mark that a lot of people missed.  However, I think the 10K was supposed to make a left.  I had made up some ground on the woman in front of me and I saw her go straight on through.

As I was approaching to what I remembered the turn to be, I did not see a single marker to indicate I was supposed to turn.  Could I have been mistaken?

Since the lead runner had gone that way and I hadn't seen any markings to indicate I was supposed to make a loop around a horse arena (like last year) I kept going and crossed the finish line with little fanfare -- it was a tiny race and most of the 5K runners had clearly finished well before me. 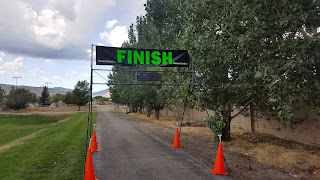 
Hard to say how I feel about this year.  I think the race was clearly short on account that last year I ran the exact same course for 6.13 miles.  This year, it came in at 5.87.  Looking at my time from last year, I was in the realm of about the same finishing time, but perhaps a little slower...

There were no finishers medal at this race and unless you were one of the top 3 in your age group (they had super wide age divisions) you weren't going to get a medal.  This was fine, it was a $15 race so my expectations were low.

Post race they had a social pancake breakfast which included eggs, hash browns, I think Tang, and pancakes.  This was included in the price of your race, which was nice.  It was also time to meet and greet people but again the race had maybe a hundred people at most, and most of the 5K runners had already left.

The t-shirt was a tech shirt of similar design from last year's.  It was fine and one I'd use for regular training runs.

I liked the course.  I know running through a residential area doesn't interest many people, but there was a mix of open fields, residential, and suburbia.  While not a stunning course, for whatever reason, it does hold my interest. 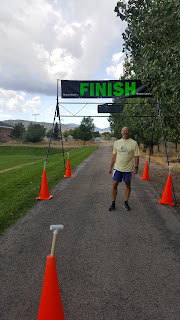 I was pleased with my experience, with the exception of the final quarter mile into the race.  I think the final turn should've been more clearly marked.  I would've liked to have been able to compare last year's time with this year's.  The course had 2 water stops, which is fine for a 10K but the mile markers were way off.  I am glad I was wearing my Garmin.