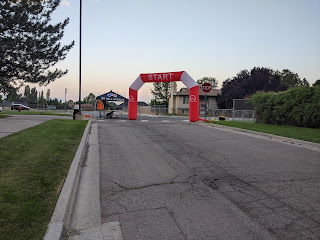 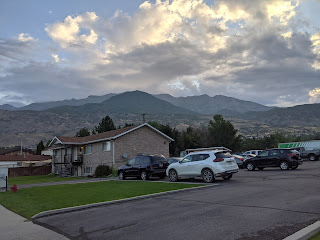 For the 3rd year in a row, I've signed up for the Provo Canyon to Pleasant Grove 10K race.  As a matter of fact, I won the inaugural 10K race back in 2019.  Now with more people joining in on the fun, I haven't been so fortunate.  It has been growing every year since its inception and this year I think was a record year for it.
The race sports a 5K, 10K and half marathon.  My half marathon training, generally, in the summer isn't very regular, so doing the half marathon would've been dicey at best.  Also with August weather, the chances of it being insanely hot, are higher.  The 5K doesn't seem to be worth driving down to Utah county for, so the 10K has been my run of choice. 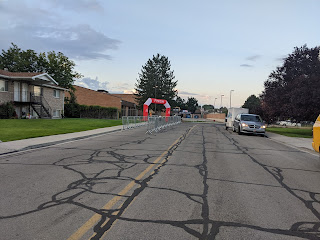 I arrived at the race site at about 7:20 for the 8:15 start. I was one of the earlier ones to arrive, which made it easy to grab my bib.  The half marathon runners had already been bussed out to the start (their race was point to point) so it was sort of a quiet scene while waiting.
I did some warm-ups but kept them light because it was already pretty warm.  I sort of came into the race as  "B" level race.  Normally this race is not super competitive but it was a race.  Also I've been racing a lot of late, so this wasn't an all out effort but somewhere between a race and a solid workout.
The race started at 8:15 and we were off.  A lot of memories came back as I started to run. I don't normally run down in Utah County other than for races but I remember a lot of the course.  The first quarter mile or so is on a residential street and from there you run south on the Murdock Bike Trail.
The first mile is slightly uphill so I eased into the race.  I was a little shocked to see an 8:15 flash on my Garmin after running through a mile.  I was moving pretty good and working but I didn't expect to see 8:15. To be honest, it was exactly where I wanted to be.
Mile 2 starts a slight descend.  It isn't a big drop, but it is enough to get your feet moving.  The 10K had started by themselves (with the 5K following a few minutes behind us) and I figured I was easily in the top 10.  I was working off some runners and was in sight of the first place woman's runner throughout the race.
I really love this course. The bike trail here is well traveled, scenic, and the temperature was actually really nice for running.  I was hurting but the scenery kept me interested.  At the conclusion of mile 2, I hit a 7:57 mile.  Even better!
Mile 3 had me reach the turn around point. Each year the race measures up a bit short.  And this year it didn't change.  I hit the turn around just a smidge after crossing mile 3.  The next runner ahead of me was a solid quarter mile ahead of me and there were a fair number of runners behind me, but closing in on.  It was also at this point that I was running into the half marathon runners who were on mile 10 through 12 of their run.  It was interesting to see all the different facial expressions -- I could tell how many were hurting, surviving and really pushing the pace. 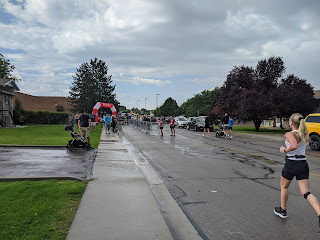 Also with the out and back course and the half marathon runners coming in, I had a hard time guessing or telling who was in my race and who I had a shot of passing.
10K races are tough.  The pace is just a bit slower than a 5K but the pain lasts twice as long.  I kept hoping to hit the 5K turn around point -- I knew I could hammer out the second half of a 5K.
Around mile 4.5 or so, I started to feel a few rain drops.  It felt refreshing and I sort of hoped for it to be a bit more consistent.  A few minutes later my wish was granted and it turned into a downpour.  It got cold quickly but it felt so refreshing.
The rain was fairly short lived and my Garmin chirped that I was at mile 5.  Normally I'd have about 10 minutes to go but with the course being a little short (according to my Garmin) I took advantage of the downhill and really worked at making my final mile as fast as I could.
I kept looking behind me, but there wasn't anyone in sight and I had hoped to gain some ground on the eventual 1st place woman but she slipped ahead of me.
I rounded the final corners and finished the race in 49:16. 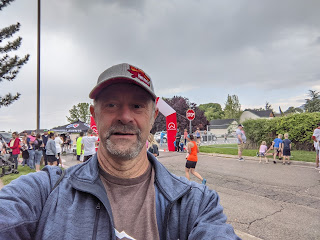 At first I was a little disappointed with me time.  I felt like I had run faster.  Once I was able to cool down and grab my phone out of the car, I was actually delighted with my time.  About 90 seconds faster than last year.  Eureka! Improvement!
Fortunately, I always carry a lot of extra clothes and supplies in my car so I was able to change out of my drenched clothing.  The sun came back out and it wound up drying off my shorts.  I did toss on a light jacket though.
Awards were done pretty quickly and I was happy to finish 6th overall and easily winning an age group award. 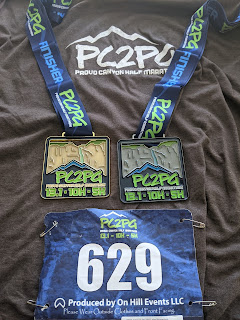 Post race refreshments were a granola bar, an orange, unlimited Fat Boy ice cream sandwiches and sports drink.  Typical post race food offerings by OnHillEvents.Com.  People were social and they had definitely bumped up the quality of the medals.  For about a $25 - $30 race I was pleased with my experience.
I just wish I had signed up for the half marathon.  The weather would've been really ideal and it would've been something new to do.
So this was another successful race.  The course was rolling hills, so definitely not a fast or easy one (especially on an out and back).  I definitely like the comradery on this one -- you get the cheers from other runners on the way out and back in.  Just wish the course was a true 10K but translating my time from 6.04 to 6.20 puts in me at about a 50:30.  Definitely a well run race.