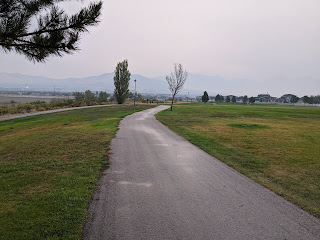 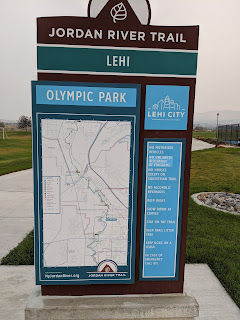 For the last few years I've seen the Labor Day 5K / 10K Pun Run come up in my race calendar.  And every year -- mostly because I've run a race on Saturday, I pass on it.
But this year, with races at a premium due to Covid cancellations, I opted to jump into this one.
The race is help on Labor Day and is started at Olympic Park in Lehi, UT -- about 25 minutes south of where I live.  The course is on the Jordan River Trail put in an area I've never run in.  The race course is around Thanksgiving Point, kind of a touristy spot / shopping center and I rarely make it down there.
So mostly out of curiosity and for something to do on the holiday weekend I plunked down my money and jumped into this race. 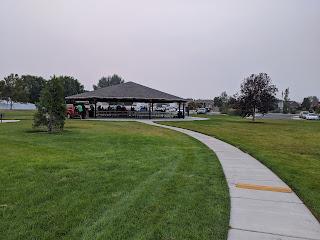 A few days before race start they announced that the 10K was lightly attended and therefore only the first place overall winner would win something.  I've won a race or two, but generally speaking the odds of me winning any race isn't very likely.
Also, with no age group awards AND having just run a 10K less than 48 hours before, I didn't have super high expectations for myself.
Although during my warm-up, I actually felt pretty good.  There was no soreness, no stiffness, just a little bit of nerves.  Again, I wasn't trying to win this race (looking around, I realized it wasn't realistic) but I'd go into it, give it a shot and see what happened. 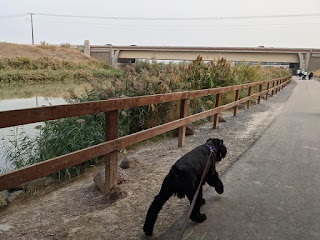 The race started a few minutes late and I quickly realized that I did NOT want to start with the mass of people.  There were about 150 people huddled around the starting line and with Covid a dark reality, I didn't want to be apart of that.
Fortunately, the race was chip timed and just as they were assembling people to the starting line, I opted to actually use the restroom one last time.  Just as I was getting out, they started the race.  It was a good minute or so before most of the people had started so I quickly took off, passing the walkers and those pushing strollers.
I felt like an elite athlete as I worked my way up, easily passing 50 - 75 people in the first half mile.  I probably expended a little extra energy for my efforts but that was okay.
I was shocked -- actually flabbergasted to see a 7:45 appear after the first mile.  I felt good -- but not that good.  The course seemed slightly downhill so I chalked it up to the slight downhill. 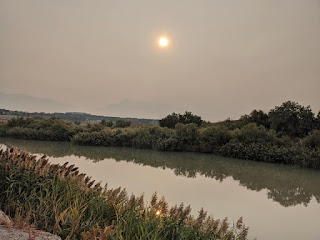 I knew I was going to pay a steep price though.  I even commented to a few runners who ran aside from me that we were going to die on the way back.
The course was run on the Jordan River Parkway Trail.  It was a standard 8 foot wide, paved trail lined with desert shrubbery.  It smelled nice and there was a beautiful view of the north flowing river to our left most of the race.  It was all new to me, so I was constantly astounded by the views. 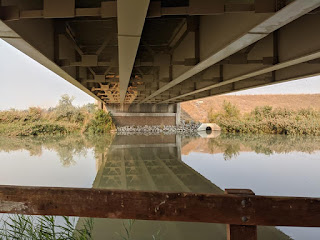 Mile 2 had me concerned.  Another 8 minute mile! How long could I continue this?  Would I be walking back to the starting line because the uphill on the way back would kill me. Daunting thoughts crossed my head.
On the plus side, at mile 1.55 I hit the turn around.  Most of the runners were running the 5K (I think a 6 to 1 ratio) and only a few people proceeded past the 5K point.  It was also spot on accurate, so I knew very likely this was a "legit" 6.20 mile run.
Mile 3 saw me slow down a bit.  I remember an hill or two here and again, I didn't have a lot of confidence that I was going to be able to hold this pace.  I felt like I was going to regret what I was doing.  Finally I hit the turn around point  -- just at 3.10 miles.  Perfect.  This was going to a PR worthy course.
The next mile had me concerned.  I had had a bunch of downhills and now I'd be paying a price on the way back. 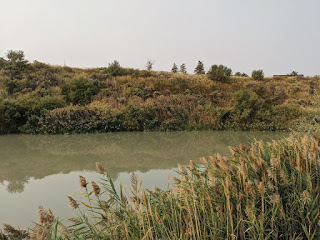 I was working with a few runners but as the race proceeded the 2nd place overall woman slow put ground on me and she became a distant target.  The few people I had passed also stayed in my rear view mirror.  So I am totally not sure what possessed me to try so hard.  Perhaps it was because I was turning in rock solid splits.  Again, I had my doubts -- the return route "seemed" mostly uphill AND I was still pretty gassed from Saturday's race. 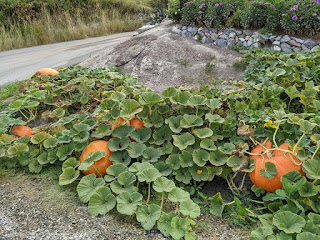 I kept surprising myself.  Mile 4 and 5 flew by, with decent, but not insanely fast splits.  However, mile 5 to 6 would present the biggest challenges.  The mile that had let me have a fast start was looming ahead and there was a pretty decent pair of hills I would have to cross.
I kept focusing on maintaining my form though.  And when the hill presented itself, I simply worked my way up as fast as I could.  Yeah my pace was slower, but once I reached the top, I found myself returning to race pace. 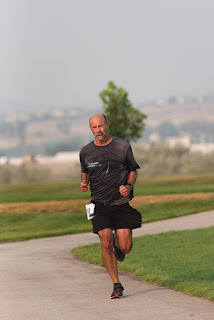 The final third of a mile was a straight shoot to the finish line.  I was passing a few walking 5K races at this point and I glanced down at my watch and realized I had a very decent shot at exceeding my expectations on this one.  My lifetime PR for a 10K is around 40:30.  Since I've turned 50, my times have been about 52 - 53 minutes -- on a good day.  Today -- I was going to hit upper 50 minutes or low 51 minutes. 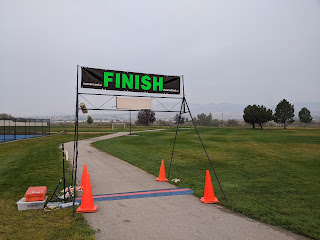 When I crossed the finish line and clicked off my watch, I saw a 51:02 pop up.  I was very excited to see that.  I had run a 5.90 mile 10K on Saturday only 20 seconds faster.  This was a legit 6.21 miles and my best time in a VERY long time -- and on a fairly challenging course.
It took me a bit to recover as I was doubled over trying to catch my breath after a final push.  I heard a few "Nice work Eddie".
There were no finisher medals for this race.  It was a charity race and for the most part a "fun run".  I normally don't do those types of runs, but I really enjoyed this one and it gave me a chance to see a really nice part of the trail system.  I am very tempted to go back at some point and do a long run there. 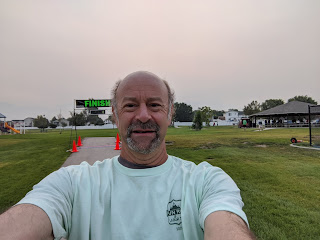 I signed up about a week or so before the race start but found a coupon for it that saved me a few dollars.  For $40 I got a well-organized race, a t-shirt, food / water at the end (watermelon, bagels and grapes).  They also had a raffle prize thing going on, but alas, I was not a winner. 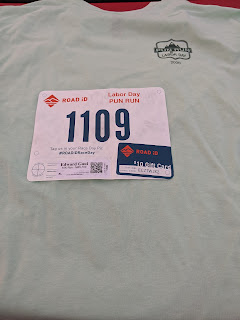 Overall, this may be my "A" race for the year.  I was very pleased with my performance and every time I felt like I didn't have much left, I dug down, pushed the pace and kept going.  I think it helped to be running some place new, focusing on my running and also enjoying the sites and smells of the trail.  I was very fortunate to have cool weather for the morning.
I am not sure I'd do this race next year, but if I feel up to it, I might give it a go again.  It was something new and I ran really well.  I just wish Covid hadn't made a mess on this to make me hyper sensitive to socializing.
Posted by Eddie Gaul at 1:44 PM