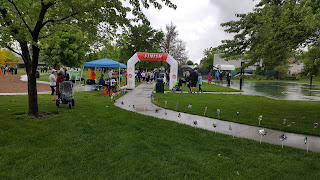 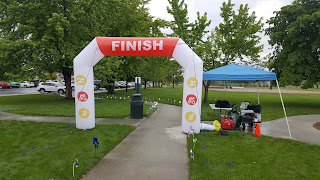 It's been a while since I've run the Race for Grief.  The last time I ran it, it was in 2015 and I had just finished running the Ogden marathon.

With me coming off of an injury I am itching to get in some shorter speedier races to sort of work back into short racing shape.

There were a few races to do in the valley but since this one is reasonably close to my house and I knew the course, I figured I'd jump into this one.  Plus, I know the race director (and timer) so it was good to see people that I knew 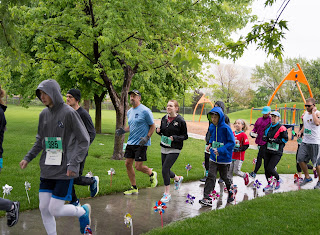 When I left Murray, where I live, it was wet but not raining.  There were clouds threatening the area but it didn't look serious.

By the time I got onto the freeway it was raining.  And at times hard.  The closer I got to the race the worse it got.  I had brought some cold / rainy gear with me but not a lot.  I comforted myself with knowing that I could hang out in my car before the race and it was "only" a 10K.

I grabbed my shirt / bib.  It was raining at this point and I figured my attire was going to be gloves, windbreaker, shorts, and baseball hat.  The air temperature wasn't freezing but it was looking like it was going to be an unpleasant race.

I waddled back to my car and began to wonder if the race was even going to be held or postponed a bit.

Fortunately the weather let up minutes before the race's start.  I got in the starting area with about 5 minutes to spare.

The race also had a 5K component and the speedier ones were well ahead of me.  I was feeling really good at their turn around point.  About half of the runners that were ahead of me made a U-turn and began to head back.

I was hitting 8:30 min per miles.  This was my unstated goal pace and one I felt largely capable of.

The bike trail was absolutely perfect to run on.  It is nearly 100% flat and you  have the Great Salt Lake marsh on your left and cloud shrouded mountains on the right.  I am very familiar with the course and have run along it a bunch of times for a variety of races.

I was running with a few other people.  I was never entirely alone but the race was sparsely attended, so there was room to run.  I did run with a young woman who was lamenting that she had signed up for the 5K instead.  She was speedy but didn't have the endurance and would get ahead of me and then walk for a bit.

The turn around was a welcome site.  I kept telling myself -- just a 5K to go.  I figured at this point I was in the top 10 but mostly I was just happy I didn't see too many guys my age in front of me.

The young woman and I swapped places before she eventually pulled ahead of me at mile 5.  I had a few guys pass me, including one 40-year-old.  Had my pace dropped that much?

The rain continued to hold off but with the accumulated moisture, droplets of rain was falling from my hat.  My feet were soaked but otherwise the weather was perfect. 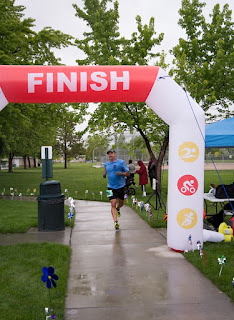 The final mile was hard.  There was absolutely no one behind me, except for the woman who had simply run out of gas and was walking a bit more than she was running.  And one of the 40-something guy's ahead of me... but he was not catch-able.

The course didn't have any mile markers but they did have marshals at turning points.  There were a total of 4 water stops. 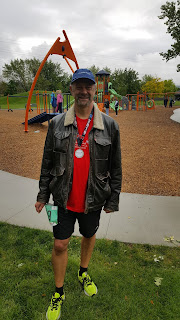 I felt fine after the race.  No hamstring issues and while I was a little chilled, I was in good spirits.  I had done about what I expected I would do for this race. 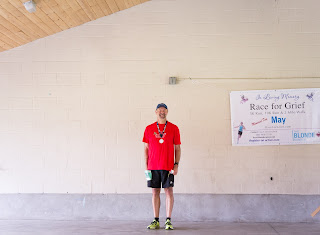 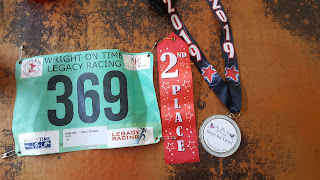 I wasn't planning on sticking around for awards.  But it was a small race and it was done super quickly.  It was also social hour for me so I wound up making small chat with a bunch of other runners I knew. 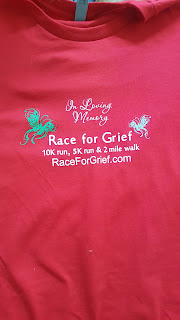 This was a low key race for me and I am glad I did it.  I am okay with my time, but I know I can do better, especially seeing I ran the 2015 edition in under 50.