Pleasant Grove is a tiny community nestled near the Wasatch mountains in Utah County.  It has a mix of old, nostalgic houses as well as new modern subdivisions.  You can definitely tell that the downtown area has some history to it.  Many of the buildings looked like they were built in the early 1900's.  Some of the surrounding houses also were built in the mid 50's -- potentially earlier.

The race has a police / fireman theme to it.  Since it is their strawberry days festival, many of the public workers were ready for a parade and worked as course marshals as well as lending their equipment to host the race.

The race started about 5 - 10 minutes late.  For a different style they started it off by using a flash bang grenade.  Suffice to say, you don't want to be anywhere near one of these...

The race was billed as not hilly, but I thought there were some rolling hills.  While none of them were back breakers they did play a part in the race.  There were only a few sections of truly flat sections.  However, for each uphill there was a generous downhill return.

I felt good at mile 1, clocking in roughly a 7:15 mile.  I was starting to feel it at mile 2, which included a significant uphill section.  I haven't looked at my split yet, but I am guessing it was close to 7:45.  While the 3rd mile was mostly downhill, I was having a hard time getting leg turnover... again probably leftovers from the full marathon I did 2 weeks ago.  I did close the 3 mile race course (it appears that the course was short) in 22:45, enough for 3rd place in my age division.  Not sure what place overall, but I am guessing in the 20's to 30's.  They had a solid turnout as well...

Afterwards, I did a cool down through the neighborhoods, grabbed a donut and a water and took off.  I believe you had to outright win your age division to get an award.  They did give away free pins / medals to all finishers.  For $20, I enjoyed the race and it was nice to experience a new community.

I am slighly disappointed with my time, but again, for a few weeks post marathon and working to get my speed back, I'll use it as a tough workout / tune-up race. 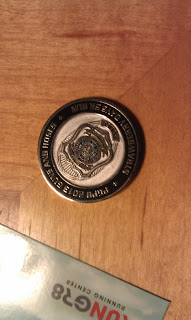 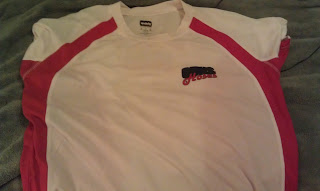