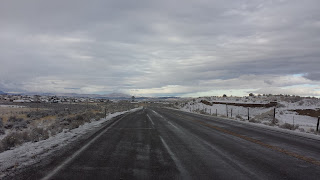 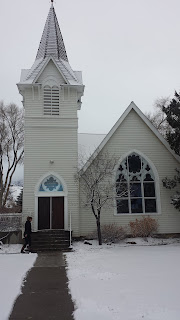 
For a while now I've wanted to run the Lamoille / Elko Turkey Trot 5K.  And most years I just let it pass by.  I am usually close to the race site -- it is a yearly tradition for me to go to Wendover (half way there from Salt Lake) on Thanksgiving.

This year, however, the fine folks at Red Lion threw me a nice offer for their hotel and I decided to take them up on it.  I also got into the race for cheap since I registered early.  I just needed the weather to cooperate.  Getting to rural Nevada in the winter can be dicey... a passing storm can strand you.... or worse put you into a ditch where cell reception is spotty.

We've had a mild fall, and I figured I'd be good.  However, upon making the trip on Friday afternoon from Wendover, I found myself driving in rain.  Luckily it was over 40 degrees so it was just rain.  If I had been driving in 32F degree weather I'd be really really sorry.

It rained most of Friday and the temperature dropped.  Luckily the combination of the two didn't happen.  The roads were slick on Saturday morning but definitely not bad.  However, getting home might've been an issue.

The race starts at 10 AM, which was super nice.  It allowed me to wake up at a reasonable hour, loaf in bed and by the time I got to the race it was reasonably warm out. 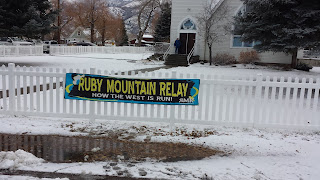 The race's headquarters were situated at the base of the Ruby Mountains at the Presbyterian Church of the Crossroads.  This church was completed in 1905 and much of the building is still in its original state.  It is a historical treasure as well as a fairly nice place to start the race.

I knew a few people at the race and I wound up getting my bib / shirt pretty quickly and socializing.  I did a short 1 mile warm up as well and declared myself ready to race. 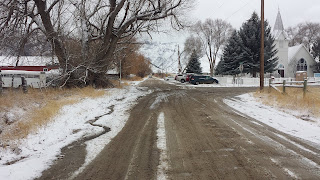 
The race started out on time.  I was wearing shorts, two shirts, and throw away gloves.  I felt I was adequately dressed and by the end of the race I was rolling up my sleeves because I was so warm.

I started off okay and settled into what I thought was my 5K pace.  I found myself breathing hard almost right away.  For the uninitiated, Lamoille sits at about 5800 feet.  So the air felt a lot thinner.

I thought the road was going to be slippery, but it actually was good to run on.  Anything that was painted, however, was slippery.  But footing really wasn't a concern despite the snow and slush.

The race heads west from the church along the main drag.  There was some traffic, but Lamoille is a sleepy little village and most of the cars passing by where nice (the speed limit is also 25 mph). 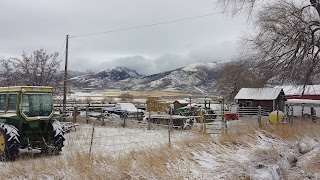 The first mile went by quickly enough but I wasn't too surprised to see an 8:30-ish appear on my watch.  I rarely ever speed up on a 5K, and I settled into the fact that this wasn't likely to be a breakout race for me.

The next half mile wasn't any easier as we turned into the entrance of Lamoille canyon.  There was a bit of a breeze coming through the canyon and it was a very tiny uphill.  It felt like I was hurting more than I should be.

I was so thankful to hit the turn around, which I reached at 1.54 miles on my Garmin.  It felt so good to be running downhill with a bit of a tailwind.  Hopefully I could make up some time. 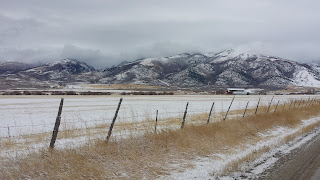 I was running solo at mile 2.  No one was behind me for quite some time and I was chasing down a woman and a young kid.  It was funny to see him look at me every now and then trying to keep ahead of me.  I tried to work off of him and make an attempt at passing but I was pretty gassed.

The final mile, of all things, was my fastest.  It was primarily downhill and I had a tiny tail wind to push me along.  I was counting down the 10ths of a mile until I reached the finish line.  I was so happy to finish. 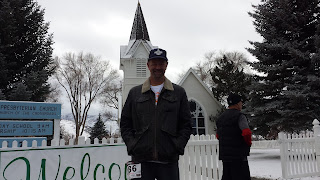 
I wound up finishing with a time of 26.09.  My time wasn't too unexpected.  Running at thinner air on a more difficult course then my previous 5K definitely made a difference.  Still, all things considered it wasn't too bad of a race for me. 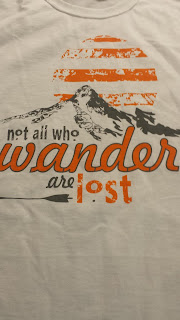 I changed into some dryer clothes and hung out in the church.  Post race refreshments were chips, bananas and water.  Pretty basic fare for a fairly cheap 5K. 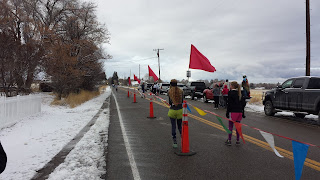 I snagged a nice t-shirt and since I won my age group, I got a ribbon.  It was also a special treat to hang out in the church.  I've photographed the outside of the church before but it was nice to be able to sit in the seats and admire the stained glass.

Overall, it was nice to do this race.  It wasn't a simple one to get to and in the long run it set me back a bit of money, but like all my travel races, I try to pair it with other fun things: like food, gamblin' and buffet eatin'.

I've run most of the course before in some capacity but it was still pretty -- although I had a hard time appreciating it since the 5K tends to be painful almost from the get go.

If my travels take me to Elko again next year, I'll definitely run this one again.  I always enjoy seeing my Elko friends and doing a low key 5K. 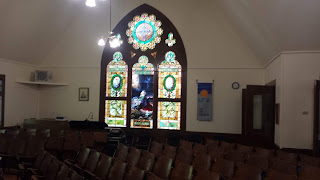 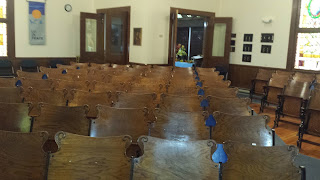 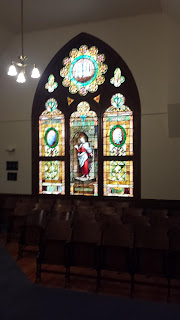 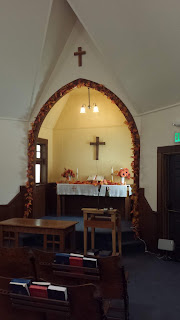 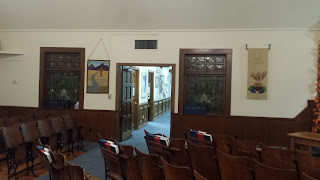