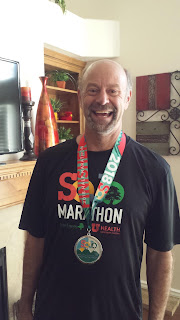 It has been a while since I've run the South Jordan Half marathon.  I thought I had run it more recently than I had, but Athlinks never lies.  When I first moved to Utah I ran the half marathon.  A few years later I jumped into the Full Marathon.

It's primarily a locals race.  Not too many people travel for it and it is popular with area runners looking for a good experience without a lot of fuss, which is what the SoJo race does.

I signed up for it on a whim.  They had a Labor Day special to save like 20% off the entry fee so I figured, why not... $50 or so for a half marathon isn't a bad deal.  There are other races in the area (namely the Haunted Races) but they involve a lot of logistics and the folks at SoJo make it easy to race.

So on Friday night, I drove about 5 miles to the Community Center and picked up my bib, a nice shirt and a swag bag filled with local goodies.

I'll state that I didn't get any on-course pictures.  I ran without my water bottle so I didn't have my phone.  So this will be a fairly "picture less" race.

I rolled in around 6:15 to get on a 6:30 bus.  They had nice coach buses waiting for us and parking was simple.  The race was held at the business park where there is a large park next to it.

The race start is in the downtown South Jordan area.  South Jordan is a sort of a yuppie town filled with planned and very clean subdivisions.  It is a great place to raise a family and is very contemporary.

We were dropped off in front of the South Jordan Medical center. In years past they had heating lamps out but we were left to our own devices.  They had plenty of bathrooms, however.  We had to kill about 20 minutes before the medical center opened and in there we had clean bathrooms and heat.

Right off the bat, I realized that I had a problem.  My running shorts kept dropping down.  A lot of times I wear a canteen around my waist so it keeps my shorts in place.  But this time they were sliding down.  So every .1 of a mile, I'd shimmy them back up.  This went on for a while.  I tried to tie them but I was wearing gloves.  I probably spent the first 2 miles of the race messing around with them before I finally I had them tight.

The first few miles I just took in stride.  I hung with the 1:55 pacer and I was okay with that.  Given my current fitness level and past times, I figured that is what I'd shoot for.

I was pretty happy with myself to hit all of my targets.  In fact, the 1:55 pacer said he was ahead of schedule.

The course does get a little around mile 4 when you pass by the South Jordan LDS Temple.  I knew the hill was coming but it doesn't make it any easier.  Luckily after cresting that hill you are rewarded with a fairly nice down hill section.

I was still feeling pretty good at mile 6 although I could feel some fatigue settling in. While it wasn't super warm, I noticed I was working up a pretty good sweat.  Also the course was wearing down on me.  While the course is fine, it isn't super exciting.

It is primarily residential roads as well as running along the bike lanes on some of the busy thorough-faires.

There were some people out cheering.  Primarily families for other runners but none the less, it was nice to get some support and encouragement.

Aid stations, stocked with oranges, bananas, water, Gatorade and even some gel stations were placed about every mile.  I had carried a gel in my back pocket, but it turned out I didn't need it.

By mile 7 the race started to get challenging.  This was a fairly dull stretch that was just an uphill grind.  The hill wasn't serious but it was mentally taxing.  I wasn't too surprised to see my pace fall off here.

I kept telling myself to hold on.  The 1:55 pacer and I were trading places and he informed me we were still ahead of schedule, so I was okay.  Also I knew from previous experience that miles 8 through 11 were primarily downhill.  They just couldn't come fast enough.

Finally, we turned a corner and I could tell we were now heading down hill.  I was hoping I'd have a little more energy on this part but I was gassed.  My endurance training hasn't been the best and I just sort of coasted down the gentle hill.

It was humbling to see the marathon winner (I believe who ran a 2:32) fly by me.

It was really nice running down hill with the yellowing trees above me.  I was wishing that the final 5 miles were all like this.

Just after mile 11 we jumped onto the Jordan River Parkway and headed south.  I used to run this stretch all the time before purchasing my house.  I've also run it for many a race so I knew exactly where I was.  It was also kind of boring.  I just wanted to be done in all honesty.

There were a couple of times I just wanted to walk, but I held on and dragged myself to the finish. 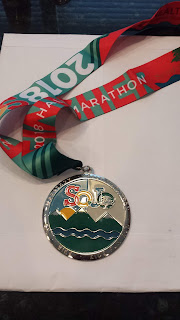 
I was pretty happy with my race.  I had a goal in mind and I made it.  While my time wasn't anything to get super excited about, it was what I felt capable of.

After the race I found a few people I recognized and grabbed a soda and a Fat Boy ice cream sandwich.  They had a festival like atmosphere with tons of medical support as well.  It was a beautiful day and I was more than happy to just sort of kick back and enjoy my accomplishment.

I think I paid around $50 for the race.  They had a Labor Day special for 20% off and I jumped on it.  I got a really nice experience.  The shirt was nicely designed and the medal was good too.  The South Jordan recreation center know how to put on races and this was nicely done.

For those looking for a low-key, local affair, the South Jordan 5K / Half Marathon / Marathon won't disappoint.
Posted by Eddie Gaul at 6:59 PM