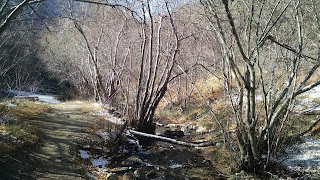 The other day I was looking for another hike to do - nothing too strenuous and nothing too high -- on account we had gotten a bit of snow recently.  I don't have a lot of snow hiking equipment and I wasn't sure how bad the 7000+ elevation zone was.

So I talked to a coworker who had mentioned that they had recently done the Centerville Canyon trail (also known as Deues Creek Trail).

Centerville is located about 25 minutes from my house so it was kind of a no brainer for me to do.  I had done several other trails in the area including Steed Creek and Farmington Creek Trail.

Like the other trails in the area I opted to park in a parking lot rather than chance my brand spanking new tires against a fire service road.  I think the dirt road was driveable but I really wasn't willing to risk wheel damage.

To get to the trail head I took the I-15 north to Parrish lane and exited east.  I went to the road dead-ended and then took a short drive up a paved single lane road and parked at the top.  I then walked about a third of a mile to the north Deues Creek trail head: 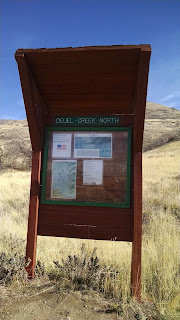 The north trail climbs above Deues Creek and is more sunny.  The trail was easy to follow and I had a pretty good idea of where to go.

Rather quickly you are greeted with a view of a nice waterfall.  You can take an unofficial detour and visit the base of the falls (and also a juncture to the southern part of the trail) but I don't recommend it.  It is rather steep and I wound up somersaulting down the final 10 feet.

I did take the official north trail and at a copse of trees it joins the southern trail.  From there on out, the trail reminded me a lot of Adams Canyon.  I had already done most of the elevation and at this point it was fairly smooth sailing.  You can see my route here.

The trail also became heavily shaded.  It was comfortable on the way in, but once I was inside the canyon, the temperature dropped a good 5 degrees.  Also as I progressed I encountered a bit of snow.  Not a lot -- maybe an inch, but definitely slowed me up.

The trail was very easy to follow.  There is some hanging brush but you'll know you are heading the right way.  About every half mile or so a mile marker will appear.  In addition, there are a little campfire sites.

You'll also cross over Deues Creek several times.  There are several spots with about 18 inch wide man-made bridges you'll have to balance upon.  They were in good shape and despite my less than dexterous ways, I made it across without getting wet.

You will also likely encounter the trail's creator there.  I know my coworker had and I ran into "Jim" (I believe that was his name).  Nicest group of people you'll ever meet on the trail.  They offered me food and drink (which I had plenty of) but I hadn't brought any gloves and my hands were frozen.  They saw my plight and gave me some to borrow (which I returned at the end of my hike).  I even got a chance to talk and ask questions while sitting by a nice warm fire.

This trail is pretty quiet.  I only ran into the trail's creator.  On the way back, I ran into a few people just starting the trail and there were a few people on the Bonneville Shoreline Trail, but in the furthest reaches of the trail: no one.

And it sort of spooked me.  Near the end, where I suspect the falls were (I didn't actually reach the fabled falls) the trail got gnarly.  If it was a dry (no snow / ice) day, I would've easily braved the trail conditions.  But today, hiking in nothing more than some worn down pair of running shoes, I decided against getting on the evening news.  Some of the trail edges hovered about 6 - 8 feet above the creek and I could see myself easily falling in and not being able to get out or hurting something.  Having not seen anyone else on the trail, I was really nervous.

I'd like to finish this trail and actually see the falls (I don't think they are as spectacular as Adams) but I want to say I've hiked it.

I found the trail to be about 2 miles each way.  I started my Garmin at the parking lot, so I wound up doing close to 6 miles.

Also this trail would likely be ripe ground for rattlesnakes.  I chose a good time to venture out but in the summer months I'd be wary of them. 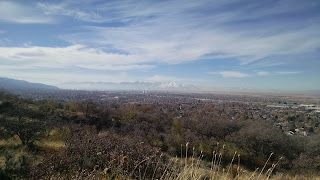 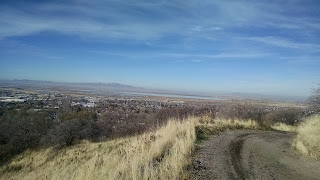 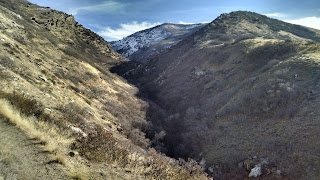 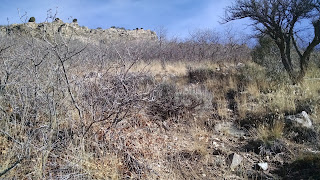 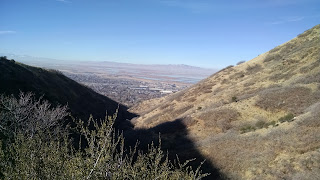 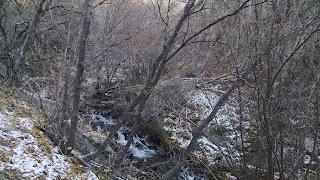 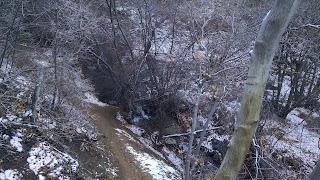 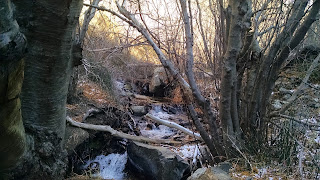 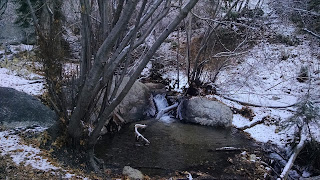 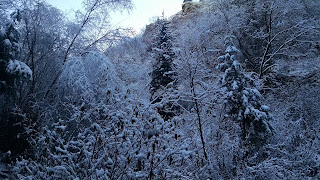 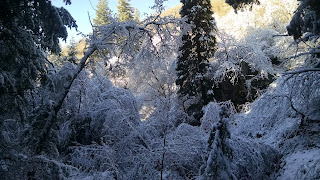 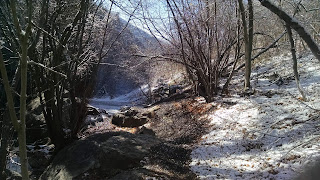 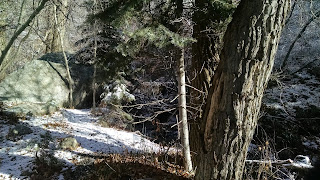 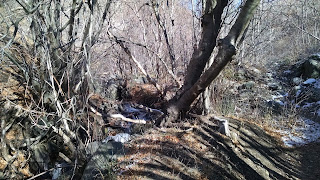 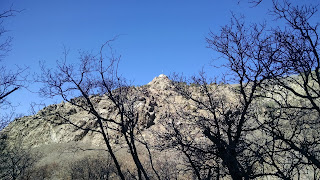 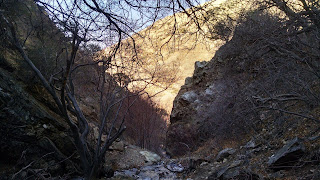 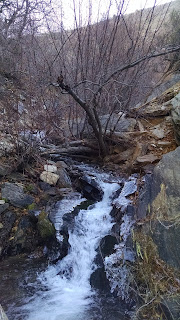 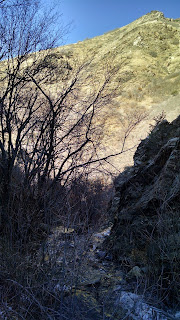 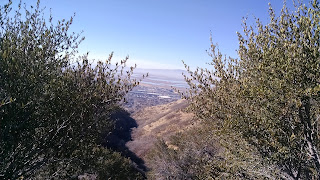 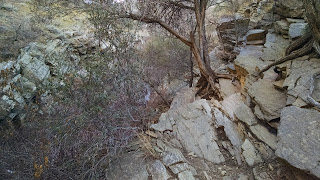 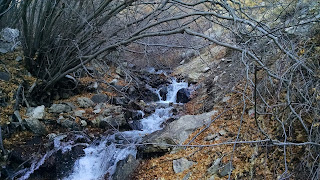 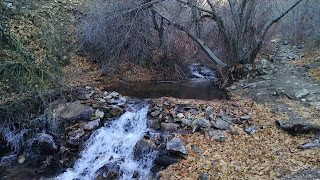 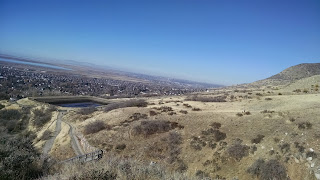