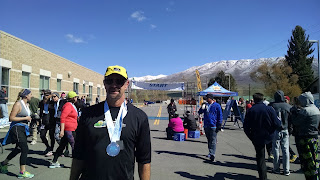 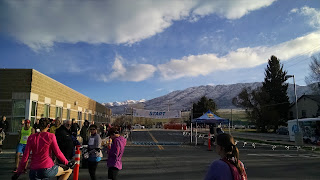 First off, I know it isn't terribly bright of me to schedule a full marathon on one weekend and then a 30K the following weekend.  But I signed up for the Salt Lake City Marathon over a year ago and in December I signed up for the Winter Striders Race Circuit -- a package where you pay about $125 and you get to run in 5 races (5K, 10K, 10M, Half and a 30K).  I had done the 5K and 10K, but missed the 10M on account I was running the March Madness Half Marathon down in Boulder City, NV.

The Half Marathon was rained out so basically I *had* to run the 30K to even come close to getting my money's worth.  Also, they had a deal that if you ran at least 13 miles, sent them a Garmin dump, you would get your 13.1 medal.

So how could I say no?

Also, I love the 30K course.  The Pineview Reservoir / Eden / Huntsville area is so awesome and beautiful at this time of year.

So with tired legs I was just going to mail this one in.  If I ran well, great, if I didn't, well I was going in with dead legs and I doubted very much that today was going to be a magical day as far as running goes.

I got up at 5:00 AM, grabbed some breakfast, saddled up and headed out the door.  I had been worried all week that the race was going to be rainy.  We've had a little bit of everything weather-wise (even snow) but the weatherman promised clear skies on Saturday.  He didn't disappoint.

It was a little windy though as I made the hour plus drive to Ogden / Eden.  I was hoping it wouldn't be too awful -- you just never know what you are going to get in the canyons.

A lot of people were bundled up.  I went with two tech shirts (one long-sleeved and one short), a hat, sunglasses and shorts.  I also wore some throw away gloves, which I wound up wearing the entire race.  I was completely comfortable and at some point, I was a little upset that I had worn two shirts. 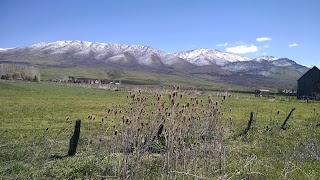 I didn't really know what I was going to do.  I had visions of walking the latter miles of the race.  I had run minimally throughout the week and had some tiredness, fatigue, and some aches and pains for the marathon.  I even wondered if I would run 3 miles and then call it a day and hoof it back.

Spoiler alert:  Luckily, none of those things happened.  I actually maintained a fairly decent pace up until mile 14.

The first couple of miles I went out super conservative.  I always have a hard time holding back.  I wish the first few miles of every race were as easy feeling as the last few.  But they never are.

I felt like I was going a ridiculously easy despite the rolling hills and gentle uphills. It was just a beautiful day and I was enjoying running without the pressure of going for a time.  So I was a little surprised to see myself running low 9 minute miles.

Around mile 4 I realized I had to make a bathroom stop.  I don't know what it is.  I went about 10 minutes before the race's start but it seems like every race now I've got to go.  So I did lose about 20 - 30 seconds in the porta potty.

I recognized most of the route from last year and as the race progressed I was reminiscing about all the previous times I've run the race.  There are a few quaint and quiet streets that have babbling brooks and majestic houses.  I so wanted to stop and take a picture or two, but to be honest, I thought I was making a pretty good pace and didn't want to slow down.

I was so thankful to reach the half way point.  Sure my legs were a little tired but overall I was feeling good.

Around mile 11 I had to make an emergency pit stop.  I think the Korean food I had had for lunch yesterday was deciding to finally trouble me.  I was starting to eyeball some bushes.  However, I knew a bathroom was coming up.

The much needed porta potty was in site when I saw about half the runners continue going straight -- towards the bathroom and a handful make a left and go down a side street.  I certainly didn't remember any turns from the previous year.  Had the wind blown a sign?  The side street looked like it hooked east and the finish line was to the east.  The mile markers had been off consistently throughout the race and had my doubts as to whether to make the turn.

I followed the folks in front of me and kept going straight.  Mostly the bathroom was my #1 target.  I made it to the bathroom with barely time to spare and took care of business.

Around mile 14 my legs suddenly went to lead.  I was running solo at this point and occasionally catching the walking half marathon person from the "short" race.  I knew the rest of the race was some uphills.  I had done pretty well up until this point and was pleased but I hated to suddenly run out of gas.

I was greedily gulping my Tailwind and I was knew I was kind of dehydrated.  I was occasionally greeted by a passing runner (I was picking off very few at this point except for the 3 hour half marathon walker / runners).  I would periodically commiserate with my fellow runners and asked if they had taken the "weird" turn.  Some sad they had, others said it wasn't on the map and others say they ran part of it.  Disclosure alert:  I did check the map after the race and we were supposed to make the turn... sigh... 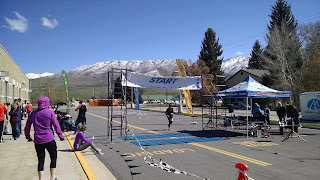 
I wound up crossing the finish line around 2:54.  Definitely slower than last year but this year I definitely was at half strength.  I didn't beat myself up too badly for the slower time.  I was more upset about not really completing the official course.  I know I am not the only one but it certainly explains why I came up short in terms of mileage. 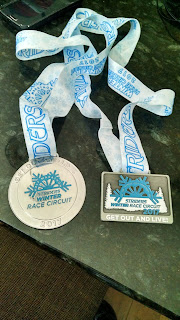 I was really "done" by the end.  I had been doing a shuffle the last mile and I was super happy to just stop running.  I grabbed two medals -- one for the 30K and one for the half marathon that I missed.  I kept doing more surveys asking how many people took the weird turn (probably about 50% said no).  So I didn't feel too badly about missing it.  It certainly wasn't on the course last year.

I grabbed some drinks and wound up making a lot of small talk with various runners.  I know the race director and I spent some time chatting with her.  I didn't really recognize anyone, but I wound up having good chats with a variety of people -- most who were astounded I was running a 30K race the week after doing a marathon.

That is the great thing about the running scene.  We have instant friends at every race.

Overall I was happy to do this race.  I love the course and the medals were heavy duty.  This race series is a bargain.... About $125 for 5 fully supported races.

The mile markers were really off.  I forget when they started to be off, but I'd pass by mile 4 and my Garmin would reach mile 3.75.  Also mile 17 was over 2 mile from the finish line.  So the markings were off.

I recovered okay and then went out to eat.  I did stop by on the way down the canyon to take a picture of a waterfall.  With all the rain and snow we've had, the Ogden River was in full force.  This is just one of the beautiful stops you can run by when you run the Ogden Marathon. 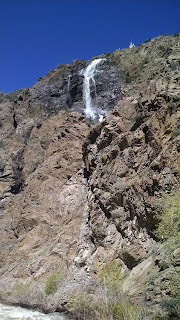 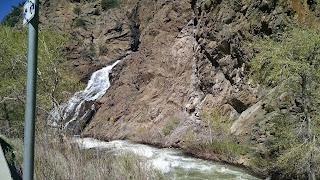 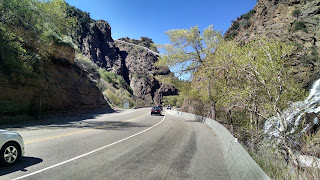 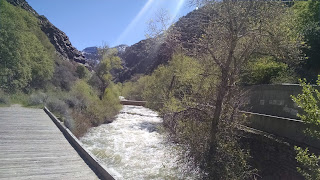 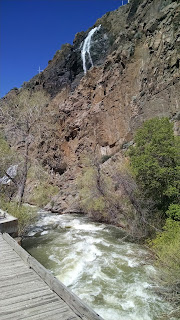 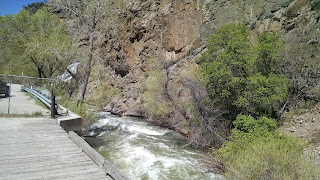