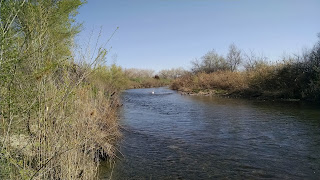 
Well this is the second week of the taper.  Judging from my overall volume, though, it wasn't too much different than any other week -- just not super long run.  I did manage to get in some quality miles though, with good workouts on Sunday, Wednesday and Saturday.  Nothing too extreme, but definitely harder paced than usual.

I was tempted to run a race this weekend.  Believe me, my mouse was hovering over the "Register Now" button more than once.  But I kept myself in check and decided to save my energy for this coming weekend's Salt Lake Marathon.

I know the course is hard and I would've liked to have had a more traditional build up.  I am just hoping for good weather and being able to start healthy.  I don't have any time goals, but I just don't want any death marches. 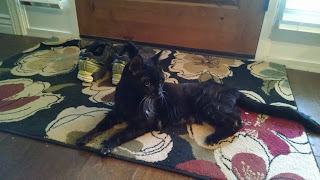 This week I had to part ways with my 20-year-old cat Spooky.  She's been a trooper and has had way more than 9 lives in her life.  Cancer and kidney failure was making her life misery and it was time.  She was a beast of a cat and the diseases had whittled her away to almost nothing.

It is hard parting with her.  She was very loyal to me and every time I passed by her, she'd get up and demand to be rubbed.  I had the magic hands and she knew it.  I also knew how to pet her and if I got out of range, she'd let me know with a not so gentle bite (not sure what possessed this, but she was mean spirited in this way).

There are so many memories of this cat and all we've been through.  She wasn't the easiest but she was part of the family.  The house definitely seems more quiet now that I have no pets.  Also, there is an odd feeling of when I wake up that I have a pet to feed -- and then remember there are none.  Yes the house is cleaner -- no more litter boxes or stinky food, but there is a sense of emptiness and void as well.

Spooky will be missed. 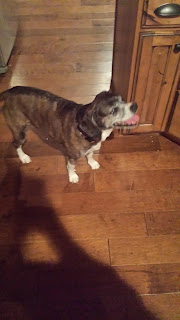 Eddie to the Rescue


If you've read my blog for any length of time you know that I love animals.  I feed a couple of cats every day I run that aren't mine.  One is a feral cat who has never paid me an ounce of respect and another one has a home but knows I come with the "goods" and we'll share some time with one another.

I do keep an eye out for trouble on the bike trail.  Whether it is someone homeless, or an animal that needs help or what not.

So on Thursday as I was heading for a walk to feed my feral cat (it was my rest day, so no running) I spied a dog not far from my house.

We eyeballed each other but he kept to his side of the road and I kept to mine.  Suddenly, however, he darted across the street and nearly got hit by the 5 PM traffic.  He ran into an alley after nearly missing another car.  I think I was making him nervous.

I had never seen him before and I knew that if I left, he'd probably dart back across the street and surely get hit.

So I whipped out some cat treats and used them to coax him into a sense of trust.

I called the city but getting animal control or any sort of help at 5 PM is a no-go.  They said they'd be there but after an HOUR, they never came.

I did get the dog to trust me and I checked his collar with bribing him with treats, which he greedily ate.

So we were stuck.  He wasn't buying it when I tried to lead him and unless I had a leash he was going to bolt.  I was looking for anything to get him.  No one was home either and I don't have a leash at home.

Luckily, I spied some old rope holding together a gate.  I managed to untie it and make a leash out of it.  I tied it to his collar and off we went.

I brought him home and called the city, who now said they were closed and I'd have to deal with it until the morning.  Huh?  I have a deathly ill cat and now I have a strange and hyper dog in my house.  I couldn't just let him go.

I tried to leave him in the garage but he wasn't happy there so I let him have free reign on the house, which didn't please Spooky.  I went to the grocery store to get some dog food but it turns out I didn't need to -- he was robbing what ever was on the counter and eating that.  He ate a TON of cat food.

Eventually it was getting late and I was worried about Spooky and I knew we had to take her in to the vet in the morning.  I also had this dog who I didn't want to let out of my site.  We have a lot of wood in our house and he was clearly exploring and I didn't want his nails scratching stuff.

He climbed on the bed with me and even put his head on my legs but he was too crazy and couldn't sit still for more than a few minutes.  This was going to be a no sleep night.

On a whim, I called a 24 hour vet to see what they suggested.  Luckily, they took in strays and would coordinate with the city.  They were the answers to my prayers and sleepily I went over there and turned him in.

I haven't heard back yet but I did check the checkbox saying I wish to be notified if his owners can't be found.  He was micro chipped and I can only hope they have found his owners.

I am glad I did my good deed for the week and that I may have saved a dog's life and gotten him reunited with his family.

I am not sure I want him but you never know.  We bonded and at the vet the dog was glued to my side -- as if to say "Please don't leave me, I want to be with you".  And he was so cuddly in bed.  I was really sort of sad to turn him in.  He did understand basic instructions too, so obviously he had a family (he appeared on the older side too).

I love dogs and I could easily see myself getting attached to this one... 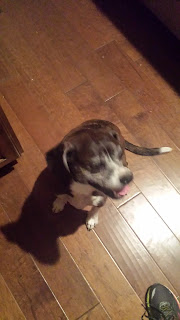