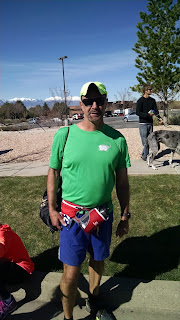 
I am not 100% sure why I signed up for this race.  I think I got an email from them, as I have raced some of their other races, and the idea of racing in a super busy month made a lot of sense.

I think the other thing that made me say okay was that it was in Emigration Canyon. When I first moved to Utah in 2012, I made a drive through Emigration canyon and I actually did a hike or two there.  However, I hadn't driven down Emigration Pass since 2013.  I did remember it being downhill and absolutely stunning.

So I figured why not and get in a nice training run.... 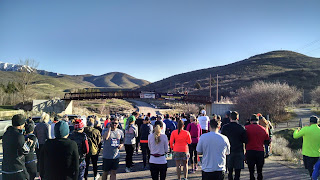 The race was headquartered around the University of Utah.  I had to be there around 6:55 for a bus.  the "U" as locals like to call it was about a 25 minute drive from my house.  Easy parking, no hassles and I made it with plenty of time.  I killed some time in my car before boarding the bus.

The weather was pretty comfortable but I noticed that there was a strong wind.  They were struggling to set up the finish line.  I was really hoping that I wouldn't have yet another race where I'd be running into gale force head winds.

The bus ride pretty much took us the route that we'd be running break.  There were two races, a 10 mile race (which only had 1 mile of killer hills) and the half.  The bus dropped off people for the 10 mile, while the majority continued on to the half marathon site.

I wound up making small talk with a former midwestern runner, so the time passed quickly.  I was happy to note that on the other side of Parley's canyon, that the wind was not a factor.  However, the hills that I'd be doing sort of gave me the willies.

I had about an hour to kill.  The buses remained at the start for those that disliked the chilly air.  I wound up hanging around making small talk and meeting other runners.  The time passed by quickly. 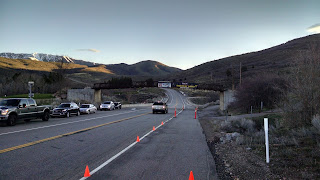 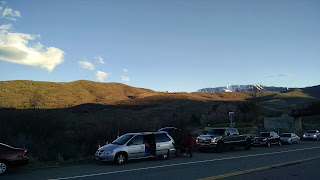 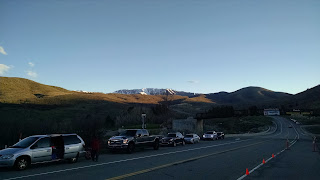 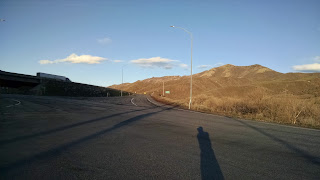 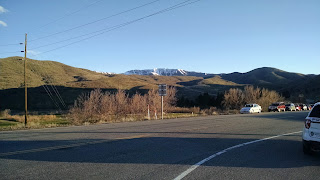 The race started at 8:30 and I decided I was going to take the initial miles conservatively and try to save as much energy as I could for the downhill.  I was hoping for 9:30 - 10 minute miles up and that's largely what I hit.

After the 2 mile, the course leveled out a bit and I picked up the pace.  I still knew I had at least another 1.5 miles more of hills so I held some back.  It was an absolutely stunning course and Mountain Dell Reservoir was beautiful: 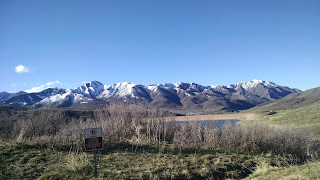 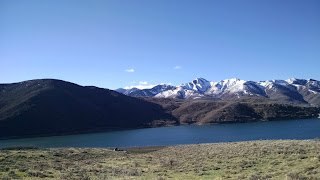 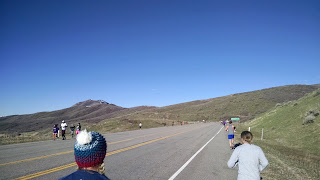 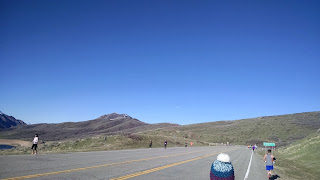 I was actually feeling pretty good and when I finally crested the hills, I knew I was in for a pretty decent race.  To make life even better, I suddenly found I had a bit of a tailwind.  How cool is that? Massive downhills and a strong tailwind! 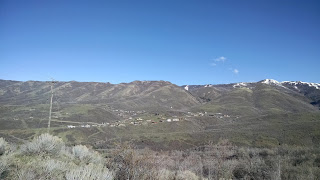 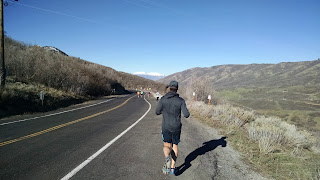 The next 6 miles or so were fun... and probably the fastest mid to late half marathon miles I've posted in a while.  I was sort of worried about my quads, which were paying a price and I felt like once the hills ended I'd be in a lot of trouble.  I had watched the course on the bus but I had a hard time judging the grade just from a quick drive-through.

But I kept knocking out the miles and laying down pretty good paces.

I had worn shorts, a short-sleeved shirt, hat and sunglasses.  That was the perfect attire and I saw some people way over dressed.  I had worn thin gloves but tossed them around the half way point. 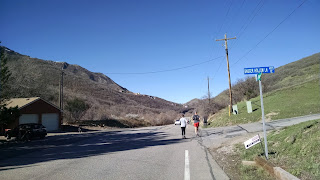 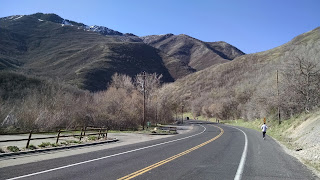 The course levels out (for the most part) about a mile from the finish line.  I felt like I didn't have much left in my shattered legs.  The course had 5 water stations (no Gatorade or gels -- just water).  I had brought my own Tailwind which I had been sipping on throughout the race.

The last half mile was a grind...  My legs were dead and suddenly I had to maintain my own pace.  The tailwind was kind of gone and I was no longer running downhill.  I noticed that everyone around me felt like they were running through quick sand.  It also seemed like the finish line would never come.

Mercifully it did and I crossed the line in a respectable 1:53:53. 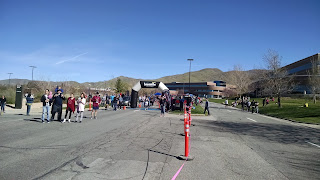 I was pretty sick feeling near the end.  This race just used me up and the downhill section had done a lot of damage to my legs.  It took a while before my stomach could settle down.  Luckily, I sipped on some Tailwind and kept walking until things settled down.

A little too soon, I think, I wound up grabbing some food.  It was catered by Ruth's Diner and they were serving up some eggs and hash browns.  The race director had warned us that the finish line may not be set up  -- let alone food at the end -- because of the strong winds.  But by the time I finished, the winds had diminished and it actually was a very nice day.

They had also freshly made carrot, orange, ginger juice, which was so nice.  They also had the typical post race spread of bananas and such.

The shirt was passable.  I could've not gotten a shirt and saved myself a few dollars.  But I like shirts and I usually wind up wearing them.  Plus, in this case, it will likely be the only memento I have of this race. 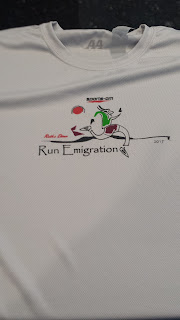 Overall I was very happy with my time and strategy on this race.  I hadn't been feeling 100% all week and I had fears that this race was going to be a very long morning.  But the gods of running blessed me with a solid tailwind and some smooth downhills.

I talked with some other runners and they felt they had a slower time than usual for their halfs.  For me, I was ahead of schedule and so I took that as a very positive sign.

This race isn't for everyone.  The downhills aren't too gentle, as advertised.  Also the roads are cambered so I found my hips and knees taking some punishment.  The course was stunningly beautiful though.  There was so much to look at and I enjoyed all of it.  However, it wasn't closed to traffic, but those driving through the canyon know to expect runners and cyclists (this course is a popular training ground and a course for other races).

Would I run this one again?  Probably.  I would love to get a medal at the end though -- even if I had to pay another $5 for it.  It seemed sort of anti-climatic not to receive one (although mine go into a shoe box).  It seemed like others had a similar feeling as well.