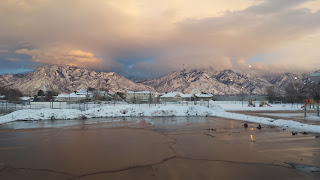 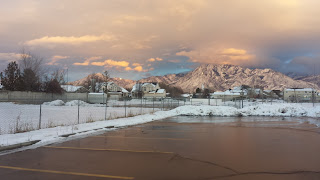 
Well another pretty solid week of training and capped off with 2017's first race.  I am so glad that I was able to do the half marathon. I had had some cabin fever the past few weeks and it was incredibly wonderful to hit the open road and get in a run.  The St George Half Marathon isn't exactly a "sexy" course, but it is different and I enjoyed toeing the line.

I totally meant to get in a long run this week... On Saturday it didn't work  out -- it was raining, cold and otherwise miserable.  On Sunday, I fully intended to get in a long run and yet again, Mother Nature cheated me.  I did manage to get in a semi long run, however.  I did start on the bike trail and it was literally a sheet of ice.  I gave up after a quarter of a mile and just started to see where I could run on surface streets.

When I ran in Illinois, I only ran on surface streets.  It was nice in that I could go on a different route depending upon what I wanted to accomplish that day (hills, flats, scenic, etc).  On the down side, you had a less than level surface to run on and you had to dodge cars.

I am so glad that I have the bike trail.  Yes I run the same route virtually every day, but I am safe.  I don't have to dodge cars or wait at lights.  There are other runners and animals that I see and visit every day.  While I had a unique run on Sunday and got to see sections of town that I was unfamiliar with, I just couldn't get into the harmony of it.

I did, however, capture a few photos that grace this post.  Sometimes it is just nice to try something different -- you come away with an appreciation for the benefits of your normal routine and you also gain insight into something new. 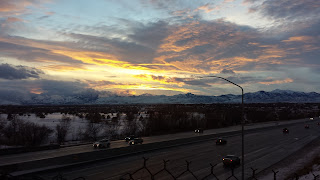 
I also had a good experience of running with what I suspect might be a new running buddy.  On Tuesday I was running along and found myself being dogged by another runner, who was catching up with me.  I tried to fend him off but there was no way that was happening.  We wound up running side-by-side for about a mile, exchanging race stories and stuff.  I had seen the individual several times but never spoken other than a quick hello.  We conversed like we had known each other for a year.

It was nice because my ordinary run became more challenging (I picked up my pace) and I got to learn and meet someone new.

Running is more than an exercise, it can be a social thing too.

Sorry folks, no weigh-in this week.  I was out of town and to be honest, pretty much the furthest thing from my mind.  I did behave myself, relatively speaking, in Vegas with the buffets. So hopefully I didn't do too much damage.  I'll do an official weigh-in this weekend.