Well this week was pretty ordinary from a training standpoint.  I got some miles in, but mostly it was a recovery week from last weekend's half marathon.  I was sore / tired for a few days after the race and then the proverbial poop hit the fan at work on Tuesday that caused a great deal of stress for me.  So by the time I came home, I really needed a run but I was so exhausted it was tough to run.

I did however get in a quality workout on Wednesday.  I was in major freak out mode from work and just wanted to pound the pavement for a bit.  However I soon ran into the runner I met last week and soon my easy run became a bit of a workout -- which was good.  It was nice to talk and share race experiences with another runner and it made what would've been an ordinary drudgery run into something more fun.

I was also fully intending upon doing a long run on Saturday morning, but what should've been "less than an inch of snow" has turned into a downpour of snow.  The last thing I want to do is get a 20-miler in with wet / cold shoes.  And I am less than thrilled to do 1-mile out and backs on a street for 3 hours.  Hopefully tomorrow as I really need to get in a 15+ miler.


Well, I checked in on the scale this morning.  I was disheartened to see myself clock in a 184.4 pounds.  And for the most part I've been pretty good about what I've been eating.  I dialed back the sweets and have been avoiding sodas.  My metabolism must've taken a huge hit recently.

It also doesn't help that I had two buffets while in Vegas last week and I was so stressed at work that on Friday I went and hit up the Golden Corral. 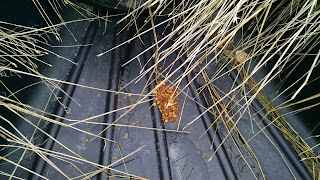 That picture above probably doesn't look like much to you, but it really is fairly significant -- at least I think so.

About 4 - 6 weeks ago I spotted a feral cat out in the field where I run.  I saw him last year from time to time and he was a scrawny, tiny thing.  He isn't used to human contact and runs away the minute you try to coax or call him over.

I normally carry dry food for my friend Snowball who has a home and responsible owners (and who regularly says hi to me on my runs).  So the day I spotted this furry feral cat I saw him run into the drainage ditch / culvert that you see above.

I immediately climbed down there and dumped some food off.

I had my doubts as to whether he was finding it.  Maybe I was feeding mice or the ducks or a raccoon.  Who knows what.

Then this week I saw this feline scurrying across the field and you know what -- he looked a LOT bigger and healthier.  So I am pretty confident in saying that this little guy is finding my food.  It's been a rough winter too.


I hope to know what I am doing soon as far as a road-trip / marathon.  Everyone at work keeps asking me "What are you doing" and I reply back that I really don't know.  Argh...