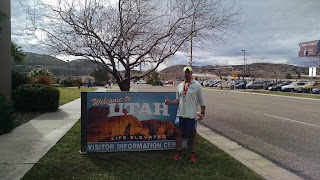 
Last year I did the St George Half Marathon.  I had a great race, probably one of the best races of the year.  It falls at a great time of year as well.  The weather is cooler and I am not burned out on racing.  Also, in January there aren't many good races around, so it is an easy decision to head on down to the southern part of the state where temperatures are about 10 - 20 degrees warmer and do a half marathon.

I didn't have any huge expectations about my performance.  I am slower and a little more overweight but my legs are fairly fresh.  I knew I could do better than my last half marathon, a disappointing 2-hour misery-fest.

Luckily, the weather cooperated and I was able to make the trip down there without any problems from traffic or weather.

I left work a little early (thanks to me getting in early) and headed down the I-15.  I dodged all the traffic and I made the 4-hour trip in  a bit under 4 hours.  By the time I got to St George, it was nighttime and I had no problems finding the Dixie Events Center, where the pickup was held. 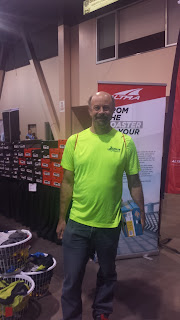 For a half marathon, it was a pretty big deal.  Lots of exhibitors and samples.  I grabbed my bib and chit-chatted with the Ogden Marathon people and the Sand Hollow Marathon race director -- both of whom knew me.  It was awesome and very cool to meet them again.

I bought a bunch of $1 tech shirts that were overstock from previous races and even bought a pair of 2015 Brooks Adrenalines.  Yes, 2 year shoes but I got them for 50% off.

We talked about where to go for dinner and had a bunch of choices.  We decided to hit up the Black Bear Dinner.  I had a veggie burger with fries -- probably not the best pre-night race, but it was calories and oh so delicious.  We were there kind of late so we dodged most of the omni-present crowds that are there (they are known for their breakfast).

I stayed at the Hilton Garden Inn, which was a great because the race starts almost in its backyard.  I simply could wake up, eat, hang around until 15 minutes before the race and head on over.  It was a little spendy, but otherwise a rock-solid choice.  Plus Shari could see me finish. 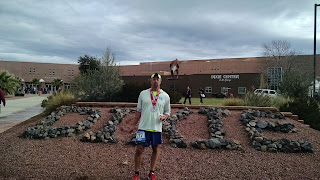 I slept pretty well, all things considered.   I was up at about 7:20 for the 9 AM start.  I grabbed a power bar and sipped on some iced tea and killed some time in the room.  Around 8:40 I headed down, used the bathroom one more time (no lines!) and got in line.  The race started promptly.

I didn't feel spot on when it started.  My legs felt sluggish and it seemed harder.  I stayed conservative and told myself if I felt good and was able to, I was going to turn it on around mile 5.

I had worn throw away gloves, shorts, two tech shirts (one long sleeved) and a ball cap.  It was chilly when the race started but about half a mile into the race I was working up a good lather.  I was regretting my choice of two shirts.

The first few miles are in town -- not terribly exciting or scenic.  I ran by my hotel and some gas stations and little office buildings before heading towards the east end of town.  At that point you make a turn and start heading towards some well-to-do subdivisions.

Traffic control was good and I was always running with someone.  I found myself hanging with the 2:00 pacer.  I knew I could do better than that and around mile 4 I stepped on the gas a little.

I dropped them and I grabbed a gel from a volunteer.  I think that put a little pep in my step and I was able to run a bit faster. 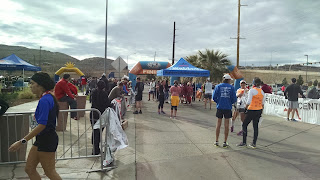 I remembered lots of the course from 2016 and there actually was really nice crowd support.  Lots of families and children along the course -- nothing like a major marathon but it was just nice to have fans alongside the road cheering for you.

Miles 5 - 7 is where the race gets challenging.  There is about 200 feet of climb here and one staggering hill.  In the grand scheme of things it isn't too bad, but it does take a bit of effort to ascend it.

However, once you get to the top you are rewarded with a glorious downhill -- almost 2 miles of it.  I had been running with a group and occasionally chit-chatting and once I hit the downhill, I decided to take advantage of it. 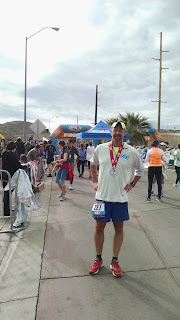 Around mile 9, you get onto the bike trail.  I love this part but it is flat and it uses the same muscles, which are tired at this stage of the race.  I was picking off people and I felt good.  I wasn't running crazy splits, but I wasn't doing a death march either.

Mile 12, I had had enough.  You basically follow the last 2.5 miles that you started the race at except you are on the bike trail.  The scenery isn't that great and all I could do was count the quarter miles down.

I didn't have a lot left at mile 13 but I pushed it to the finish.

I high-fived various people I was running with and chit chatted with people.  I recognized a few runners and made small talk.  I grabbed some Gatorade, which I needed.  For whatever reason, I did NOT get any on the course.  Just water.  I had had a gel, so that counts for something but I always missed the Gatorade sections and I am generally hesitant to mix Gatorade and gels.

There were plenty of aid stations -- perhaps 6 and they were appropriately spaced.  The volunteers were great and always had a cup ready.  There were bathrooms on course, which I didn't need. 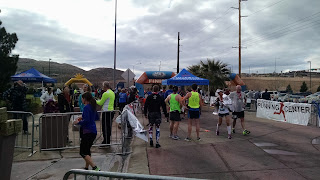 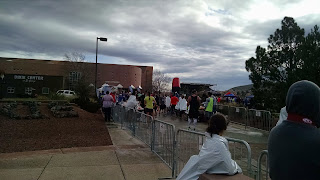 I grabbed a few muffins as well.  I found Shari and we headed back to the hotel -- we had more time contingent plans for later and I couldn't dilly-dally much.

The course isn't the most stunning but it works.  The scenery changes from business, to residential, to golf course views, to surface streets and bike trails.  I was only hemmed in at the very beginning but most people were paced correctly, thanks to the many pacers.

Performance-wise, I am mildly happy with my results.  Last year I ran a 1:49 and I knew I wasn't going to be faster.  My training and general fitness aren't there.  I did however, make a good showing for myself and I didn't have a single death march mile.  When I go above a 9-minute mile, I know I ran too fast and I ultimately pay the price.  The weather was ideal, even though I was a little warm.

The medal is huge and heavy-duty.  I love the sweatshirt as well.  Post race refreshments included chocolate milk, fruit and muffins -- typical race stuff.  Organization was top-notch -- they know what they are doing being that this was the 35th running of the event.  For $60, I definitely got my money's worth.

It is a well-attended race -- lots of people from Colorado, northern Utah, and Nevada.

I definitely made a wise choice in staying at the hotel.  It was awesome not to have to stress about parking and having a clean, warm place to hibernate until the race start.  I will stay there again next year if I do this race again, which is likely.