Well this isn't necessarily a running-related post.  It is just a recap, mostly for me and my mom to record the adventures I had on my long weekend to run the St George Half Marathon.  It is purely a selfish endeavor and I like to look back at my adventures after a certain amount of time.  It is amazing all the little details that one forgets as time passes.

I got to work super early and worked a bit of extra time on Thursday and managed to duck out prior to 3 PM.  This was to avoid any traffic and there seemed to be a hint of a snow front moving in and I've driven to southern Utah in snow before and it isn't fun.

The drive to St George from Salt Lake City is pretty much a straight shot down I-15.  Once you get south of Provo, it is pretty bleak country.  You can probably count the number of map dots on both hands and still have fingers left over.  It also isn't terribly scenic.  I usually just settle in, put the car into cruise control and away I go.

I got into St George just before 7 PM.  I made my way to the Dixie Events Center and picked up a ton of tech shirts (they were selling them for $1 apiece), a pair of $65 2015 Brooks Adrenalines, and talked to the race directors of the Ogden Marathon and the Sand Hollow Marathon.  Both were looking forward to me running their respective events.  It was nice to be recognized though. 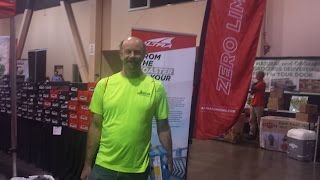 After picking up my bib we headed over to the Black Bear Diner for a bite to eat.  It was busy there (and loud) but I was happy to try the place out.  I grabbed a delicious veggie burger.  I would definitely eat there again.

I had a mouth sore that was bothering the heck out of me.  I wasn't sure what caused it but my gum was irritated.  So I went to a desolate K-Mart and scored a bottle of hydrogen peroxide, which helped a ton (hint for gum infections, swish with it).  We opted to drive an extra mile to check out Utah's oldest active LDS temple.  For a Friday night (and late too) the temple was bustling with activity.

I then drove back across town and checked into the St George Hilton Garden Inn.  We had a really good stay there and it was so convenient to be pretty much at the starting line once I exited my room.

I actually slept pretty well and with a 9 AM start and not having to move my car anywhere, I was able to sleep in a bit. 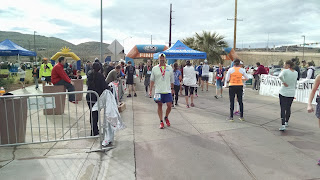 After finishing the race, I quickly went back to the hotel, showered and packed up and within 30 minutes or so (I am quick) I was on my way to Mesquite, NV.

I had a 2-for-1 buffet pass for the Casablanca Hotel and their buffet closed at noon.  Thankfully, Nevada is one Pacific time, so I made it in plenty of time.  They do have a good buffet and Shari and I ate for about $9.  You can't beat that.

Shari hit paydirt right away and won about $170.  Unfortunately, we stayed a bit too long and she wound up giving it back and then some.

Me ... I tried pretty hard and didn't get squat.  I did get some play time, but I definitely paid for the buffet.  I never win in Mesquite and I should just stop going.  You think that it is not Vegas you have a better shot but it just doesn't pay out.  I've never won there.

We rolled into Summerlin Nevada in about 90 minutes and stopped in at the Suncoast.  I've had good luck there.  I wound up playing my favorite slot machine and got a bunch of bonus rounds, but they all paid next to nothing.  Soon my investment was gone.  Just nothing.

We met my aunt there and we circled the casino some more.  After a while we ducked over to the Rampart but I realized my luck was crap and had pretty much called it quits for the day.

Tired of gambling, we went over to my aunt's house in Summerlin and settled into our "hotel" for the next 2 nights.

In the evening we went to Casa Di Amore for dinner. My uncle had posted pictures of the food he was eating there one time and I knew I had to try it.  It was noisy, cozy and a bit pricey but the food was really good.  I thought their marinara sauce was gold. 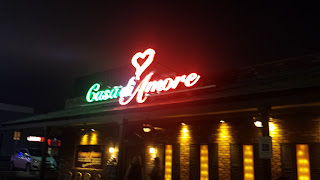 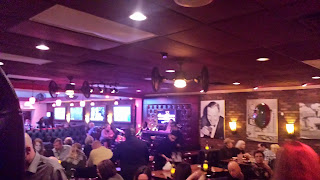 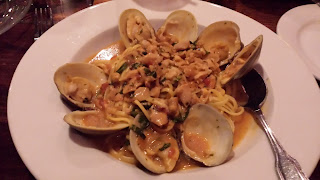 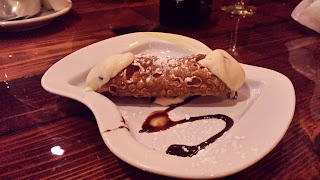 I love Italian food and this place was definitely worth the drive to the other side of Vegas to check out.

I slept in sort of late (for me) on Sunday and woke up looking to do a shake out run.  I love exploring towns and I wanted to see what Summerlin had to offer.  So I laced up and headed out.

I kind of know Summerlin, as I've visited all of their casinos and have run their half marathon twice (each time on different courses).  I am not saying I know every nook and cranny, but I have a general gist where everything is.

I just started wandering around -- cellphone in hand with Google Maps on it in case I got lost (which I kind of did).

I did a 5 mile loop, snapping pictures at whatever tended to interest me.  It wasn't the most glorious run I've ever done but it was nice to explore.  There were a few other runners out but certainly fare less than what I expected would've been. 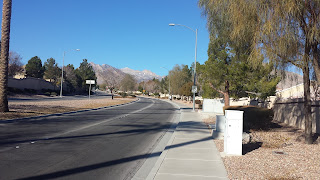 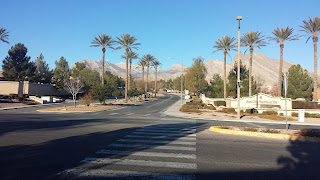 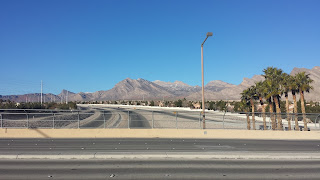 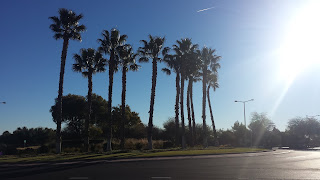 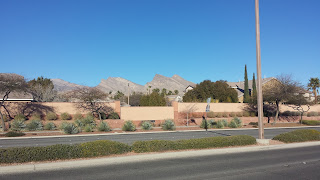 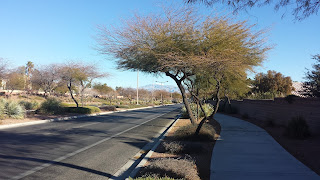 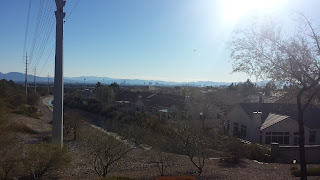 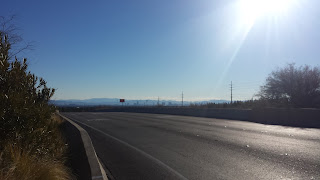 It was nice to run in the sunlight and not have to worry about slipping on ice.

After cleaning up and eating we headed over to Red Rock Canyon.  Just an awesome place to visit and I definitely want to explore more on my own sometime. 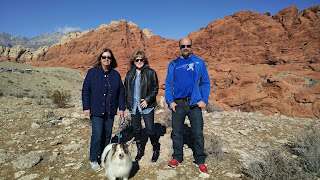 After visiting the canyon, we returned back to my aunt's house and dropped off Frank, an aged Sheltie who is just adorable to have around.

We decided we would go to the Green Valley Ranch Casino in Henderson.  I had heard about the place but never have been.  I had also read that the buffet was good.

I tried my luck yet again and didn't get anything.  It was like insert money and watch it swirl down a toilet.  Not terribly satisfying too.

We wound up eating at the buffet.  My aunt had comps there, so we would up eating for free (thanks Aunt Cathy!). 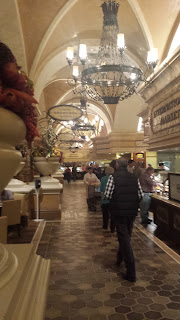 The decor and the whole look and feel of the place was similar to Summerlin's Red Rock Resort. We would've paid about $15 for a Sunday dinner and I would say the buffet is worth that.  They didn't have a lot of premiums, but their Mongolian Grill with made to order stir-fry stuff was good. 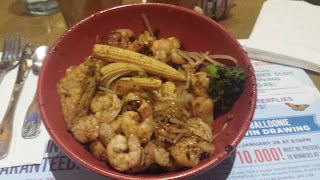 I was like a bottomless pit and I was there for nearly 90 minutes.  My aunt got tired of watching me eat and so did Shari.  After a while I was there by myself just shoveling in more food.  I wound up eating a bit too much though... But if I was going to lose in their casino, I'd win at their buffet.

Shari wasn't having any luck either so we circled the casino and watched the Packers beat the Cowboys.  My aunt was having a pretty good run on a machine so Shari and I wound up gambling a bit more. 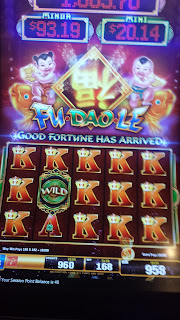 I wound up cashing out with a lot of it and decided not to press my bad luck any further.

We returned home and spent most of the evening talking and watching TV.

We wound up eating breakfast at my aunt's house and got a fairly late start on the road.  Luckily, traffic outside of Vegas wasn't bad at all and it was pretty much smooth sailing.

Once again, I stopped in Mesquite -- this time at the Virgin River Casino, and decided to use my free play and use the bathroom.  It was a costly stop and I wound up tossing away $80 in a few minutes.  I got absolutely NOTHING.  Once again, I am pretty much done with Mesquite.  Too tight for me and it left a bad taste in my mouth for the 4.5 hour trip home.

I wasn't terribly hungry when we were there, but about half way to St George, I looked at the gas gauge and figured I'd fill up there.  Then I figured, what the heck, it was almost 1 PM Utah time so I bet Culvers wouldn't be busy.

On a holiday Monday -- it was busy.  I've seen Culvers a lot worse, but it definitely wasn't a quick easy in and easy out.  Still it was good and I got good and greased up for the trip home.

The rest of the way was pretty uneventful and we got in around 5:30 PM.  Again, for a holiday Monday, traffic on the I-15 wasn't bad at all.

This trip was a lot of fun and MUCH needed.  I hadn't done anything cool for a while and I needed a road trip.  I managed to check out a new casino and actually win at a Station-owned casino (go figure).  I also got to knock off the Red Rock Canyon off my bucket list.

I had a great time and it was made a lot cheaper with the help of my aunt, who was super cool to put us up and entertain us for the weekend.