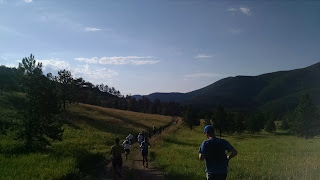 
I was itching to do destination race this summer and I was sort of trolling around looking for something to do.  A fellow runner I follow at http://50halfmarathonsin50states.blogspot.com/ posted a coupon code for 15% off the Black Hawk Trail marathon.

Faithful readers may recall that I was in Black Hawk Colorado in May when I ran the Fort Collins Marathon.  I really had a good time and definitely put Black Hawk on my "to do" list to visit again.

So when I spotted a trail half marathon in that very city, in a state park I wanted to at least check out, with a discount code I was "in".  After registering for the race, I quickly grabbed a hotel at a nearby resort / casino (about 10 miles away) and the trip was set.

I guess I didn't really read the fine print of the race, however, when they said this was their most difficult trail race.  It involves over 2400 feet of elevation climb and has some technical sections.  If you've followed my blog for any length of time, you'll know I am NOT a trail runner.  I am strictly a pavement pounder.  I didn't really train for a trail race, other than to do a lot of hiking so I am somewhat accustomed to working hard at elevations of greater than 8000 feet, which is where this one started.


First off, I slept like CRAP the night before.  I was over stimulated by the 7.5 hour drive to Colorado, gambling and overeating at the buffet that night.  I went to bed around 10;30 with plans to get up at around 5:30 to make the roughly 20 minute drive to the race start.  If I got more than 2 hours of sleep, between tossing and turning and going to use the bathroom all night, I was lucky.

Luckily, I can operate on a bit of lost sleep and I ate some food and drank some iced tea before heading out.

It was super easy finding the race site despite not having a cell phone connection part of the way there.  The race was held at Golden Gate State Park, which is a large nature preserve just outside of town.

Parking, however, was a bit of a different story.  They had limited parking and luckily the race was small (about 150 people total) and I arrived early and managed to get a decent spot.

I knew I was in for a challenge when on my way down to pick up my race bib I was huffing and puffing while gabbing with fellow runners.  I hike a lot at altitude but I was certainly feeling this one.

Packet pickup was a cinch and I managed to run into the author from the aforementioned blog site above.  This was my first meeting her and it was really nice to finally meet someone I've been following for quite some time -- and who has inspired me to race a lot more.

I was a little spooked at the start of the race:

1) A guy told me that last year they didn't have a lot of water on the course and it was WARM...
2) I talked to another guy who said that elevation sickness can catch up with you.  I am somewhat susceptible to that.
3) I don't run on trails, let alone very technical trails.
4) I was sort of worried about getting lost.  There weren't that many runners and I was going to be running on trails and in area that I was totally unfamiliar with.


I really let myself off the hook for the race.  I wasn't really concerned about my time, but more or less just wanted to finish, without splitting my head open.

I started WAY in the back... I was practically the last one to start when the race started at 7:30.  It was stop and go for the first half mile as all of us were on a tiny single track trail that slowly climbed.  I started out at super marathon slow pace and just went for it.

The first 4 miles of the race is an out and back section and it wasn't terribly technical.  Sure it was hilly and not very shaded, but I could certainly manage the footing.  The gentle climbs were taxing and some of the hills I walked up -- and I RARELY walk in any sort of race.

As I ran I asked people what they generally ran a flat half marathon and my pace mostly matched my fellow compatriots.

Around mile 3 I was seriously thinking about bailing on the race.  My pace was awful and it was warm and I was wondering if this was going to turn into a 4+ hour walk.  I kept worrying about puking because I just felt off.

Luckily I persevered and eventually the trail led into some more rugged but shaded terrain.  I ran by waterfalls, tiny creeks (sometimes having to leap across rocks), and towering aspens.  It was really pretty but hard to enjoy because I was watching my footing and trying to make solid progress on the race.

For the most part, too, I wasn't alone.  I was mostly tailing a group of women with the occasional guy in tow.  I was glad to have the company.  Again, the fear of taking a wrong turn was sort of in the back of my mind.  However, the course was VERY well marked and I never had any doubt as to which way to go. 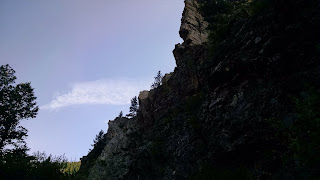 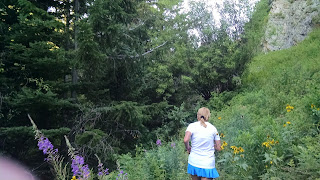 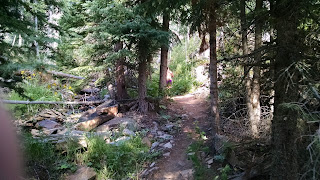 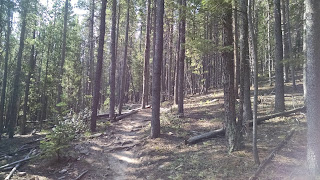 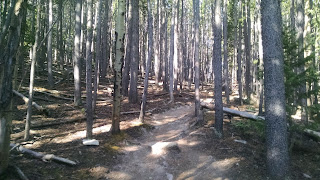 Around mile 7 or 8, the course finally opened up and while the terrain was rocky and sometimes hard to navigate, I was back in the open.  There were some good views of the mountains and trees, but I was a little underwhelmed.  I've been spoiled by Salt Lake's awesome views: 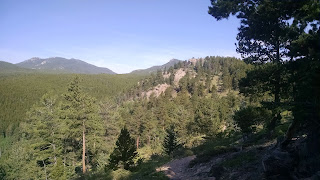 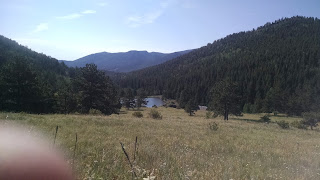 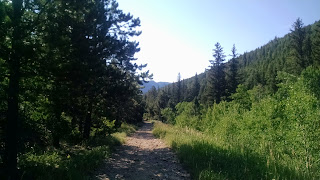 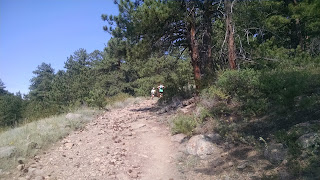 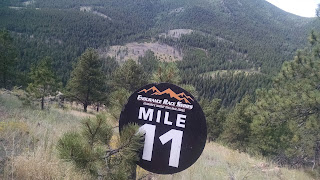 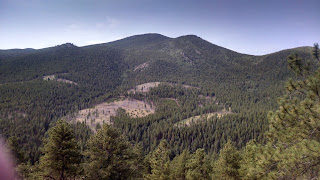 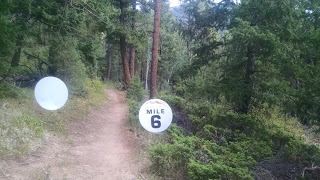 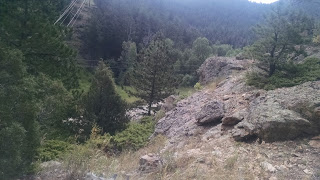 The final 2 - 3 miles I was running solo.  There was a small dog leg to get in an extra that was kind of a mess.  People were coming up and down and the trail wasn't that wide.  Also there was a pretty good drop off and the trail was super rocky.

At the start of the race, I had noticed that there was a mile marker 12 right in front of the finish line.  Sure enough, the race ended right at about mile 12.  My Garmin was off .33 of a mile most the race (whether this was mismeasured or my Garmin lost connection, remains a mystery).  Either way, I was really happy to just be done. 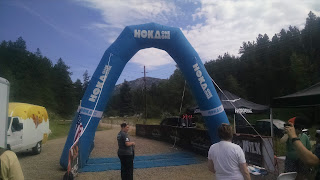 
I was pretty exhausted when I finished by glad that I had conquered my fear(s) and finished without cracking my head open or splitting a knee.

I had carried a gel with me, which I used as well as going through 28 ounces of Powerade.  I also drank from the water stops and refilled my flask near mile 10 or so.  There were only 3 water stops, and the first two were pretty early in the race.

They had plenty of refreshments at the end, including food, snacks, hot dogs, and a variety of beers and drinks.  People were super friendly and I easily struck up half a dozen conversations with a variety of people.  There were a few other out-of-towners there, but most were fairly local.

I was really embarrassed about my time.  It is my slowest half marathon to date, but you really can't count trail halfs.  The people I was running with said I looked good and I felt like I ran pretty well given the altitude and conditions.  Again, I am NOT a trail runner (but I guess I am now).  I checked around again at the finish line asking people what they normally ran a half in and my times were comparable...

For the price paid, I felt like I got a good experience.  I was a little disheartened that it wasn't a real half marathon  -- at least in terms of distance.  I can understand 12.75 or something like that, but this wasn't even close.

I liked the trail and I sort of wished I had taken more photos.  There were some really cool spots with mini-waterfalls and cool rock formations.  But I was trying to race and I didn't want to stop every few minutes, fish out my phone and snap a picture.  Also, I had to pay attention to my footing....

There were certainly moments in this race where I was like, "never again" but as the race progressed I got more and more into it.  I am not the most nimble on my feet and I am not terribly good at hills, so this race didn't play into my strengths at all.  But it was certainly an experience and I am glad I made the trip.  So I won't say never again... but at least I know I can now...
Posted by Eddie Gaul at 6:09 PM