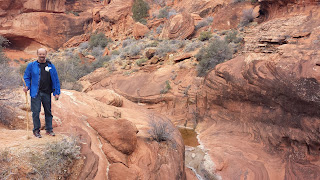 Once again, this article is mostly for me about my weekend trip to St George to run their annual half marathon.  So if you are looking for a race recap or pictures of hiking, you'll have to click their respective links.

I left work a bit early (well actually took a short lunch) and hit the road just shy of 3:30.  The trip to St George is about 4 hours and I am happy to report that I made it in 3:45.  Traffic was mild in spots and there were a lot of dumb drivers on the road.  It was frustrating at times, but I had some recorded talk shows that I was listening to that helped pass the time.

I arrived just after 7:15 and went to the Dixie Convention Center to pick up my bib, shirt and check out the expo.  Just a beautiful building and a really nice setup.

I wound up spending a fair amount of time in there.  I didn't see any shoes I wanted but I did make a lot of small talk with the marathon directors who were advertising their races.  So many races, yet so little time.  I did buy a bunch of $1 tech t-shirts for myself and friends.  Quite a bargain actually although finding them in my size was a bit of a challenge.

After visiting the expo, I hit up the Golden Corral for a quick meal.  Usually I stuff myself silly at all you can eat buffets, but I did manage some modicum of restraint and just ate enough to feel full.  I still have bad memories of my Vegas marathon where I ate way too much and wound up having gastro problems.

I had booked a room at the Red Lion in St George.  I think the hotel is in transition as they didn't have the name of the hotel in lights.  Thanks to my navigator though I was able to find it.  They had a really nice lobby and a beautiful swimming pool / sauna that I was itching to use. 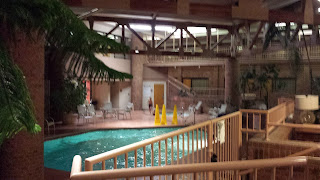 My room was way in the back.  The motel rooms aren't enclosed and face the outside.  Luckily my neighbors were pretty quiet, although there was some noise from the parking lot.  I actually slept reasonably well and the room was comfortable.

I ran the St George half marathon in the morning.  I ran really well and completely exceeded my expectations of what I thought I was capable of doing.  On the plus side, I was running in lower elevation which means more oxygen.  There is indeed a difference between running at 4300 feet and 2500 feet.

After the race, I wound up hanging around for about 30 minutes eating and trying to socialize with people.  I didn't know anyone done there so it was fairly short lived.  I managed to get a few pictures of the post race festivities before heading back to the hotel for a super long shower.

I grabbed some money from the bank that was across the street and quickly figured out where to eat.  I had a busy day planned and I didn't want to dilly dally.  I also needed to save room for dinner which was rapidly approaching.

I wanted to try something different and almost went into the Black Bear Diner, but I saw that the lot was full and people were standing around outside.  I didn't want to wait and decided to hit up the Denny's next door.

I got some super sweet and sugary Cinnamon pancakes.  Cinnamon gel with cream cheese frosting on it.  Just yummy.  They gave me a double serving of greasy hash browns on account I don't eat meat.  I'd rather have had another egg, but it's all good. 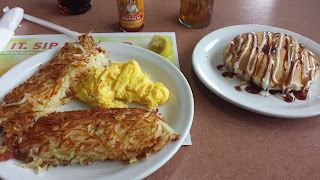 Around 1:30 I headed out to the Red Cliffs Recreational Area.  I did some hiking for a few hours before figuring that I'd like to head to Mesquite Nevada for dinner.  My Gps sent me past Quail State Reservoir, which looks like a fishing haven. 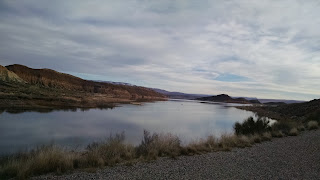 It was about a 45 minute drive and I found that the Virgin River Casino was fairly well packed.  They did have an auto show there and I quickly took in some of the vintage and exotic cars in the lot: 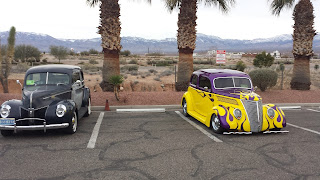 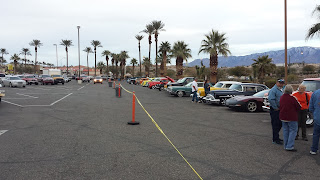 I went inside and immediately started winning on a Wonder Woman machine and a Britney Spears slot machine.  I wasn't winning tons, but I was making a nice profit.  Lately, the Virgin River Casino has been "hot" for me.  I also wound up putting $40 on the Packers to hold up against the spread versus the Cardinals.  Kind of a risky bet considering that the Packers had been crushed recently by them.

The casinos there had also sent me a bunch of coupons for free play and discounts on food. I wound up using the $10 in free play on Wonder Woman to further bolster my profits. 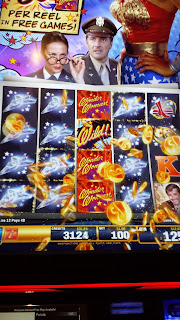 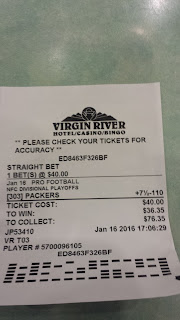 I was starting to get hungry so I made the mile drive down the freeway to the Virgin River's sister casino -- the Casablanca.  Not too many people seem to know, but they have a really GOOD and cheap buffet on Friday and Saturdays.  For about $19 you can get pre-cracked crab legs.  Normally those go for $29 and up.  They don't have much of a selection there but this is the crown jewel of their buffet.  I wound up pigging out there big time.  I also got lucky in the fact that I beat most of the crowd there and was in under 5 minutes.  Also, with my food coupons and comps, I was able to eat for $6.  Sweet.  I love a good, cheap meal! 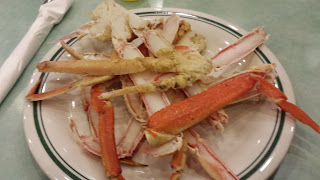 Casablanca has never been a source of good luck for me.  I wound up gambling there and while I won at first, my luck quickly went south.  I did manage to kill a few hours in there while I waited for the conclusion of the Packers / Arizona game, which I wound up winning on.

I was beginning to worry about making the 30 minute trip back to the hotel.  I was really tired and there isn't much between Mesquite and St George.  Also, driving the I-15 pass through Arizona is a treacherous drive.  It is dark, twisty and hilly.  Luckily, I made it with flying colors and hit the motel just shy of 11 o'clock.

I think I was over stimulated and had a super hard time sleeping.  I spent most of the night tossing and turning.

I wound up getting up around 7:30 and begrudgingly got dressed and packed up.  I could've used some more sleep but I was anxious to hit the road with no other reason I wanted to be able to get some things done this weekend.

I wound up eating at the hotel since it was free.  It was a typical motel breakfast and I was able to eat my fill.  None of it was very good, but it was filling and worked out.

The drive home was simple and I had enough talk radio recordings to fill the entire trip.  The drive went by really quickly and there were less idiots on the road than on Friday.

This was a really exciting weekend for me.  I had a fantastic time and my adventure was packed for every minute.  The sad thing is that I didn't get to do everything I wanted to do.  There is such a tremendous amount of things to see in southern Utah.

The race worked out well and I would certainly consider doing it next year.  I ate very well although I would have liked to have eaten at truly novel places rather than tried and trues (Golden Corral and Dennys).

I am really jazzed about it and that means I did something right.  Just glad I had the initiative and courage to make this happen.  A lot of times we talk ourselves out of doing something on account it is too much work or not worth it.  We settle into mundaneness and I am glad I took the chance to make this a super memorable weekend.
Posted by Eddie Gaul at 7:10 PM