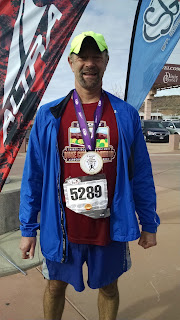 Every year in January, I start to get anxious because I am not racing.  And every January I find the St. George Half Marathon listed on the running calendar.  And each year I pass on it.  I am either too worried about the drive, the expense, or the time it takes to drive to St George (about 4 hours, each way).

This year, I decided to take the plunge.  It has been over a month since my last race and having a bit of a travel bug, I plunked down my $60 for the race, booked a refundable hotel room (just in case) and headed on down.

I left work at about 3:30 on Friday in order to beat the rush of traffic on the I-15.  It was a smart move as I had smooth sailing all the way down the corridor.  There was some congestion in the usual areas, but nothing too crazy.

It had been threatening snow all day and I was expecting a marathon ordeal of a trip down south.  Just a few inches of snow can turn a 4 hour trip into an 8 hour trip.  However, the snow fell in the morning and there was nothing but an occasional snow flake in the afternoon.

I arrived in St George just about 7pm and went to the Dixie Events Center.  For a half marathon, they had a huge expo, featuring a lot of marathons that are on my to do list throughout the state of Utah.  I also managed to meet the friendly and very cool Cory Reese over at www.fastcory.com and talk to him for a bit.  I mingled with the other runners and picked up my shirt.

They have a beautiful conference center and I certainly felt like I was at a major marathon event: 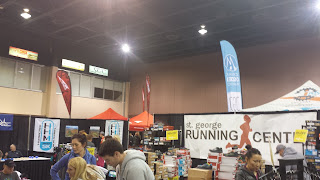 After checking out everything and buying some $1 tech shirts for friends and myself, I headed over to the St George Golden Corral.  I had not eaten much that day and I needed something quick.  I had toyed with the idea of going to Olive Garden, but I was really tired, a little cranky, and just needed food.  I vowed to myself not to overeat and largely I succeeded in not doing that.

After eating I found my way over to the St George Red Lion and checked in.  I actually slept pretty well.  Fortunately for me, the race didn't start until 9AM so that gave me a huge opportunity to get some quality shut-eye.

I got up around 6:30, ate and took care of business.  They had warned everyone to get there early as parking would fill up.  Another guy at the expo told me St George races weren't that crowded and that if I got there an hour early, I'd be way too early.  I went with my gut and showed up an hour early and it was a ghost town.  I didn't really know where to park and I had had the opportunity to get prime parking, I wound up parking way in the back.  Ugh.

They had the events center open so I had a warm place to hang out.  Within 30 minutes the place was brimming with over 1000 people. 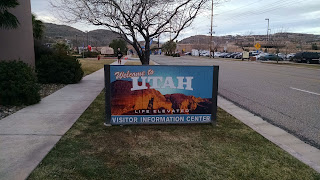 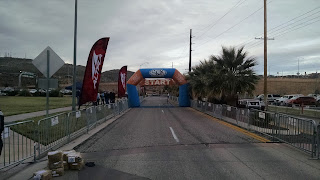 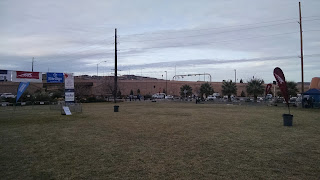 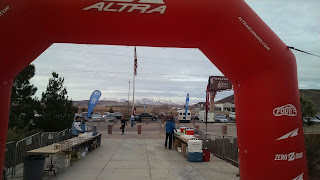 The race started off on time and me and a thousand other people began a crazy twisty-turny tour of St George.

The first few miles are in the business corridor of the city.  We did hug a bike path for a bit but for the most part it was not terribly exciting. We had pretty much half the road to run on.  I had initially been worried that I would be hemmed in on a small bike trail, but that was completely not the case.  I settled into an easy groove and was enjoying the relatively low altitude of 2200 feet (or so)

After ascending the largest hill of the course -- at about mile 7 or so, the course makes some fast descents.  I was able to pick up a lot of time that I had lost on the 2 miles of "hills" I had just faced.  Also, the course got a lot more interesting.

I've always seen a bike trail along the side of the freeway on the edge of a mountain as I head to Vegas and have always wanted to run on it.  Well, in the St George half you get the opportunity.  It was a lot of fun and up until that point I was hanging with the 1:50 pace group.  I figured I had a 1:54 in me so if I could hang with them for as long as I could, I would be happy with my time.  However, at that point, I made a move and left them behind.

Also, there was some slickness on the asphalt along the mountains.  The temperature was just above freezing and some dew had come down off the mountain and iced the bike trail.  The race organizers were on top of that and had salted that down.

Around this time, also, I was starting to have fantasies about my time and what I might be able to accomplish.  Thoughts of 1:46 or even 1:47 started to cross into my thoughts.  I really doubled down and started to pass people.  Normally, I crash and burn -- with my mile times going from 8:30 to 9:30+ during the last few miles of a half.  This wasn't the case... and when I crossed the finish line in 1:49:31, I had at least another mile or two at that pace. 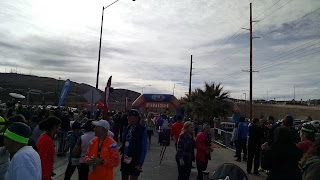 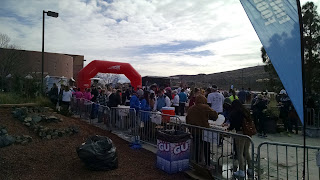 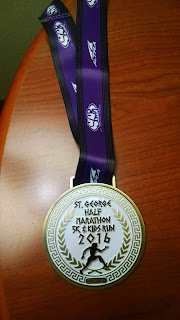 This race was super organized.  From parking, to packet pickup, to post race refreshments, to the bathroom situation -- this race had it nailed down.  In fact, I never had to wait to use the restroom... aside from the clean ones in the events center, they had rows of them at the start and at the various aid stations.  Wow is all I can say.

The mile markers were largely spot on.  Although from mile 10 or so, they were missing.  I did spot some old spray painted numbers that generally looked to be the same so this would likely be the only downside to the race.

The aid stations were well stocked with water and endurance formula Gatorade.  The middle miles did have gels as well.  The volunteers seemed to know what they were doing.

The course wasn't entirely closed to traffic and I was never running solo.  They did have the major intersections manned by volunteers and police, however.

The race shirt was pretty ordinary.  It was a nice high-quality black tech shirt, but the logo is pretty small (about the size of a baseball over the heart).  I think there is more advertising on the back than anything.  The finishers medal is actually pretty large and heavy.  I liked it.

For the price paid (about $60) I would definitely run this race again.
Posted by Eddie Gaul at 2:42 PM