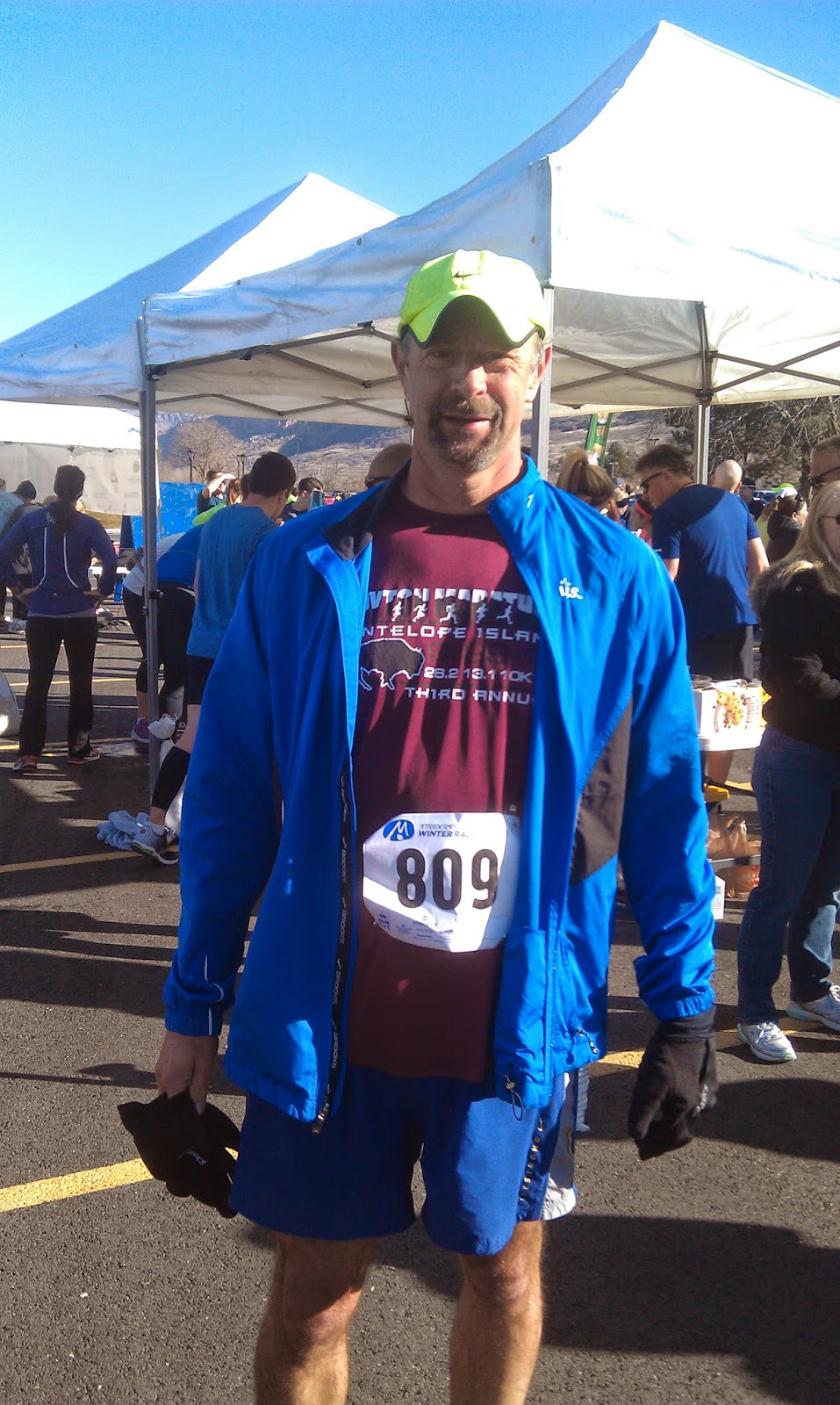 In my latest attempt to get back into racing fitness, I opted to do a 10 mile race in Ogden Utah.  Fans of my page may notice that this looks eerily similar to the 10K race I did 2 weeks ago.  It is put on by the same people so that folks have a good opportunity to train for the Ogden Marathon.

The course is pretty much a combination of their 10K race and their 5K race, which happen on the east side of Ogden.  If you are looking for a brutally hilly race that will test your heart (as well as your knees on the downhills) look no further.  I knew this time going into the race that it was going to be hilly and I knew to sort of check my PR attempts at the back door (I think my 10 mile record is 1:12, done about 5 or 6 years ago).

I didn't really have any goals for this race other than I figured I was in 1:25 shape -- assuming the hills weren't as bad in the last 4 miles (they were).  Another one of my goals was not to crash and burn and be doing the marathon shuffle at mile 8. 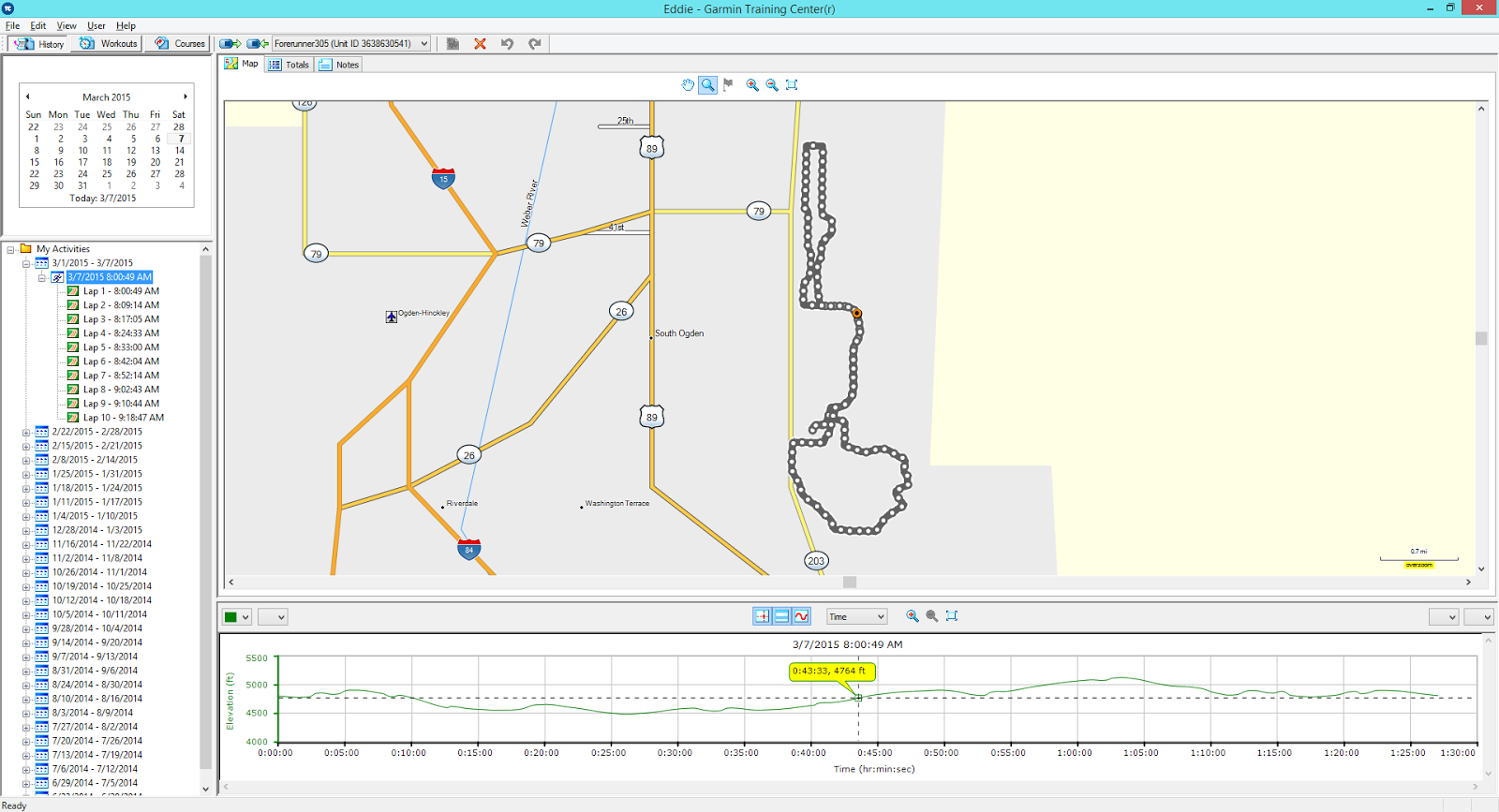 I left the homestead around 6:30 and rolled into east Ogden just shy of 7:15.  I grabbed another t-shirt -- they use the same shirt for each race.  I already have one, so my boss is the lucky recipient of this week's article of clothing.  Once again the race headquarters was at the Weber University Dee Events Center.

I wound up using the toilets and chit-chatting with various people inside.  I am glad I arrived when I did because the line-up for bib pickup was getting quite long by the time I had pinned on my bib.

The race started at 8AM and almost immediately you are greeted with a lung busting uphill. I wound up hitting mile 1 at exactly where I wanted to be.  Mile 2 and 3 was mostly downhill.  I tried to hold back, knowing that the race was still less than a third done.  I was feeling pretty good though despite a heavy week of mileage.

Miles 4 - 8 were pretty much agony.  At this point, the lactic acid is starting to build up as well as the fatigue from the pounding of the downhill.  Also, the race is at its low point, about 4400 feet.  The race's high point, 5100 feet, lay ahead.

On the plus side, the scenery was nice.  There were quite a few turns and you are primarily running against the side of the snow capped Wasatch mountains.  The first half of the course is mostly older, middle class neighborhoods.  The last half though has some well to do mansions.  Overall, it was very scenic and the race organizers did a fantastic job managing traffic concerns.

I didn't know what the final 4 miles were and hadn't really done any course studying, but I am happy I kept a lot of my energy in reserves and was able to get back into decent form in the final 2 miles.  It was frustrating though, for me, to be shuffling along and barely gaining ground against the fast paced walkers. 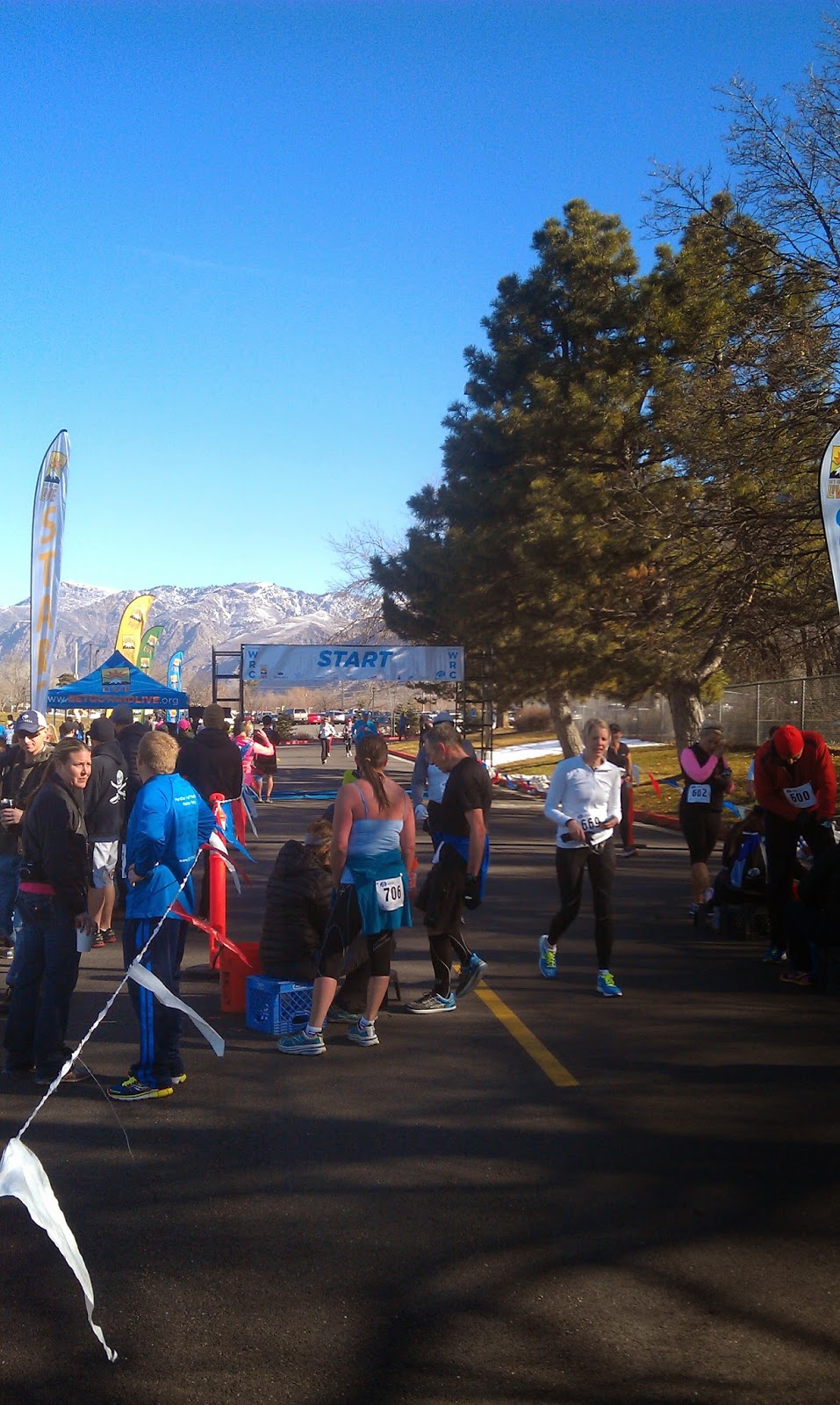 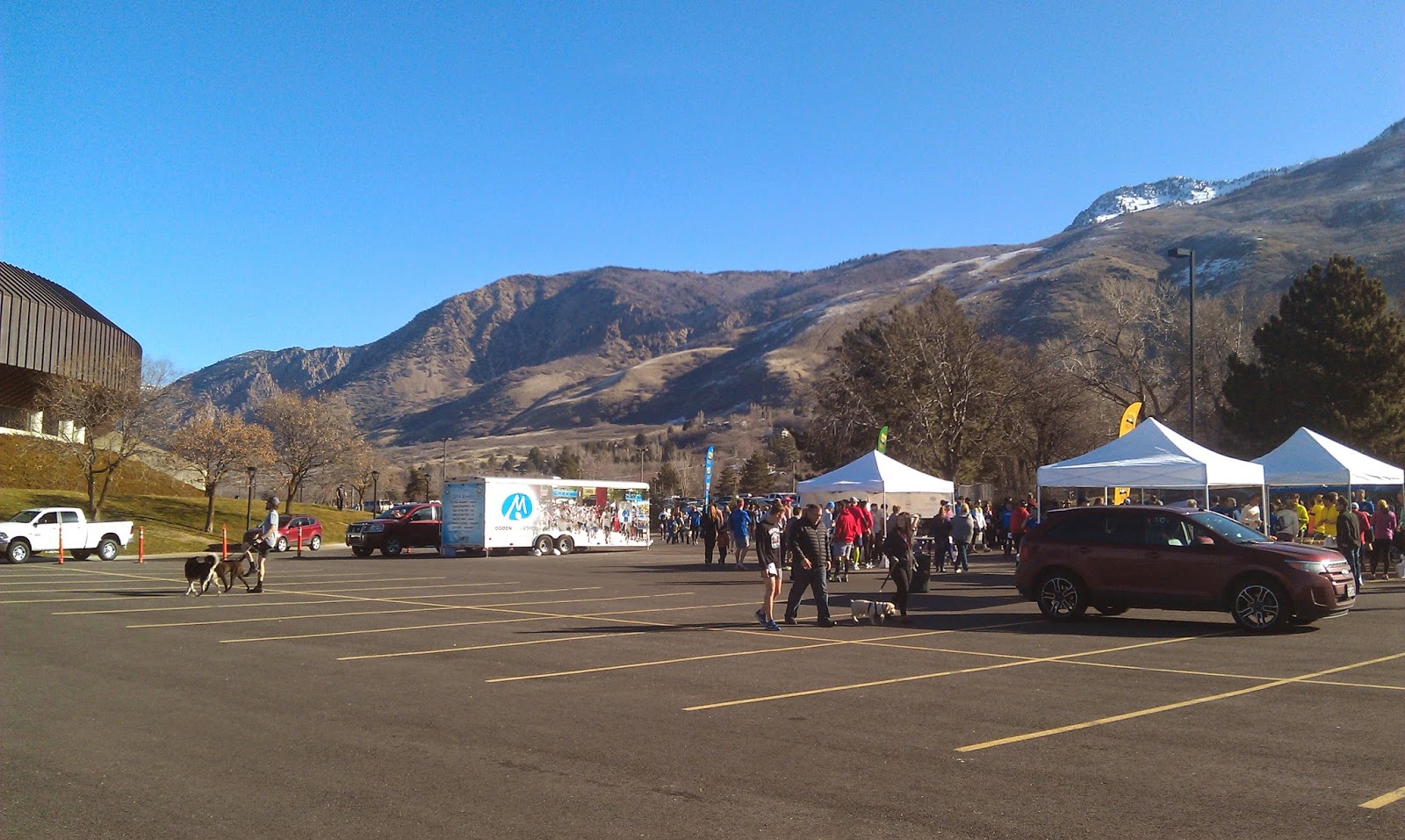 After crossing the finish line I grabbed a few donut rounds, a banana and a slice or two of oranges and made small talk with folks.  I knew I wasn't in the running for any awards but I checked out the results anyways.  The sun was out and the temperature was rapidly climbing.  So much for a chilly a morning (we topped out in the low 60's today).

I hit the road and 30 minutes later was at the Crystal Hot Springs up in Honeyville.  With it being a nice day there were a TON of kids there.  Whenever I started to fall asleep in the warm waters I found myself being jolted awake by kids climbing or nudging me.  I love the waters there, but it is a zoo for rug rats. 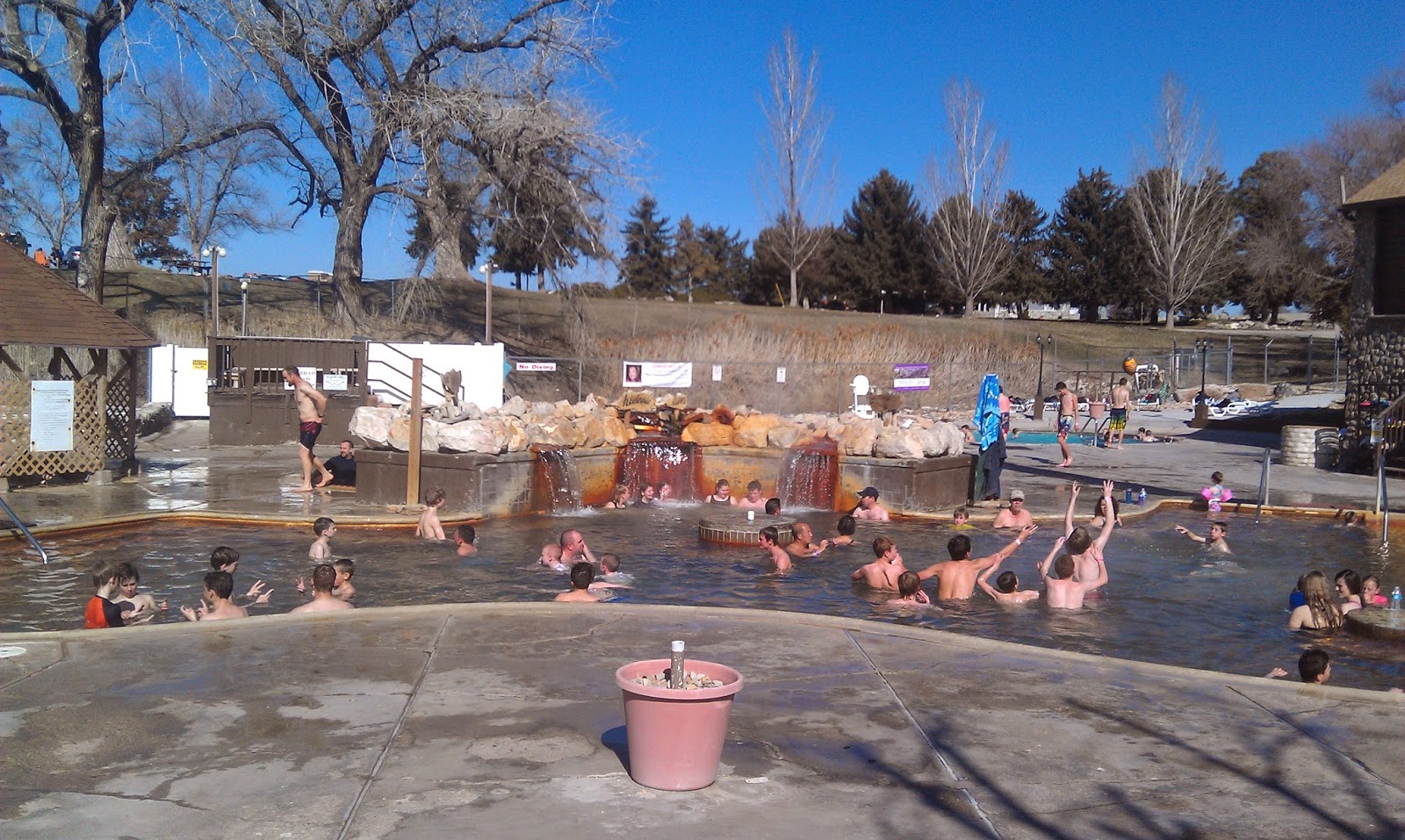 After soaking for about 90 minutes (all for $7 too), I went to the Layton Golden Corral.  I eat there so much they probably should put my picture on the wall.  I know, sad...

Overall, a good day and I was reasonably happy with my race performance.  It is hard to judge on such a difficult course, but I'd say my race time was slightly better than last week's and my pace was spot on.  It was frustrating to not be able to hold a constant pace throughout, but that goes without saying on a super hilly course that probably has close to 800 - 1000 feet of climbing.
Posted by Eddie Gaul at 3:09 PM