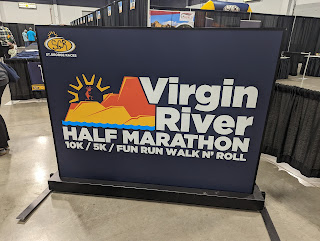 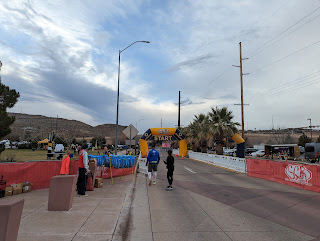 One of the few races in January in the state of Utah is the St George Half Marathon.  I've run this race for the past few years, missing last year and the previous year on account of Covid lockdowns.
Recently, this race rebranded itself as the Virgin River Half Marathon.  It is still the same weekend in January, and it shares some elements of the previous race.  However, they wanted to avoid confusion over the St George Full Marathon's new race, the half marathon edition.
I had signed up for the 2022 edition but I had to defer it on account of a family matter.  So I had to run the 2023 edition -- use it or lose so to speak.
So I made the 4 hour drive down to St George on Friday, got my bib at the pre-race expo, and settled in at the local Red Lion hotel for the night.
Before I did, however, I did have some time to walk a mile or so of the course to get a sense of the new elements to it.  The race started out near the expo center (as this year's was) and it went down a main road before going into some residential running.  Following that it joined up with the bike trail where you made a loop before finishing. 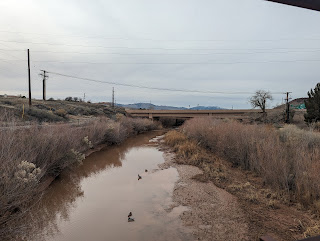 This year's course was almost 100% on the bike trail.  And it featured the Virgin River, which snakes through the area. 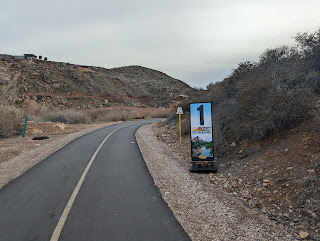 The race started at 9 AM at the convention center on the south east side of town.  My hotel was a very convenient 5 minute drive and there was ample parking.  I sort of kicked myself for not getting there a little later, as I spent a decent amount of time just sitting in my car.  But it did give me ample time to get a photo or two and a chance to visit the rest room.
I have been a little undertrained as far as endurance went, but I've been pretty diligent about my speed work.  I've been averaging about 30 - 38 miles a week, which is a little light (for me) for a half marathon. 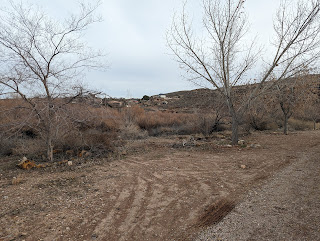 My goal was to go under 2 hours and I was really confident I could do that.  Anything under 1:57 would be great for me.  Before the race started I told myself to ease into it and wait until more than half way before bumping up the pace.
The race started at 9 AM sharp and I was off.  For the first half mile or so, the race followed the previous editions.  I had lined up near the 1:55 and 2:00 pacer and my goal was to keep them in sight and just hang with them.
I was little dismayed to see the 2:00 pacer get ahead of me.  I was running about 8:50 where as a 2 hour pace is 9:09.  Oh well, run my own race. 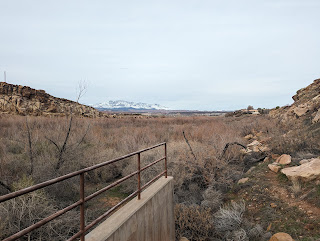 I felt extremely good and I felt like I was keeping my heart rate pretty low.  I found a group to settle in with and just went with it.
My pace was really steady and after a mile we jumped onto the bike trail on the south end of town.  I had walked some of the course on Friday so I got a sense of what I was in for.  It was mostly flat with some interesting hills at various points.  After about 1.5 miles though, I was in all new territory. 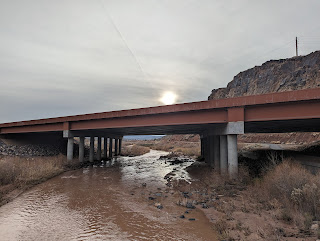 The course was pretty enjoyable.  There were views of the Virgin River, beautiful cliffs of red rock and dessert fauna.  It was easy to just fall into an easy lope.
I hit the 5K point just where I wanted to -- about 27 minutes and I was still feeling pretty good.  The next 5K was primarily run in a subdivision.  I think it was put there mostly just to get the miles in.  There were some nice houses and a few people came out onto their porches to cheer us on.
It was here where I started to feel the first round of fatigue set in.  There were some rolling hills here -- nothing extreme, but it seemed to sort of suck the life out of my legs.  I continued to work with the people I was running with and the 2 hour pacer was pulling ahead of me.  I was still running 8:50's though. 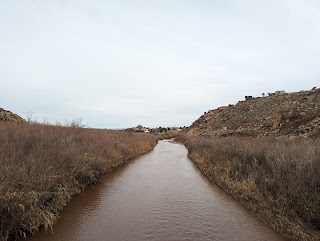 There was a bit of confusion around the 10K point.  At about this point the 10K runners (who were at about mile 3) were on a collision course with the returning half marathoners.  The turn where to head back wasn't extremely clear and the 2 hour pacer decided to straighten it out.  Fortunately there was no missed route for me, but I suppose had I been running solo, I might've made a wrong turn.
Mentally I was fatigued on the way back.  I still had a good 10K left but I was running the route I had already taken on the way out.  And I knew that by the time I got to mile 8, I'd pass by the finish line.
Finally I hit mile 8.  I looked to my left and saw the finish line -- just about half a mile away.  I could almost taste it.  I looked to my right -- and I had a decent hill to go up followed by a short out and back.
This was another mentally taxing part.  It wasn't terribly long, but it was long enough where you felt like you could get into the groove. 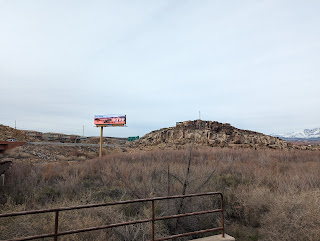 At this point, I knew I had nothing but downhill and flats left.  And this was the point where I felt like I was going to turn on the jets and bump up the pace a bit.
I knew the course from this point on as the last 4 - 5 miles followed the editions I had done in the past.  My inspiration to run fast though -- was short-lived.
I cranked up the pace for about a mile and it was at that point that I returned to the flats.  And I just didn't have much to give.  I had been close to the finish line yet again but I still had a solid 4 miles to go.  The course was no longer new and I felt my pace drop off -- not precipitously but slowly.
And at this point it was finally work to run and maintain that pace. It was no longer easy to hold 8:50s.
I think part of it was endurance and part of it was that I hadn't taken any gels.  While the temperature was cool I knew I was dehydrated to a certain point.  There had been plenty of water stops but when I am running I generally don't swallow a lot of what I take. 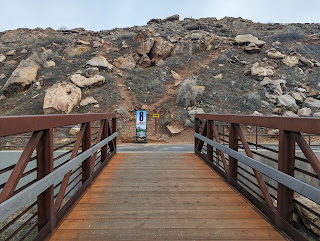 As the miles wore on, I started to do math.  The mile markers had been off almost from the start.  First just a few feet and then .05 and .1 miles.  After mile 10 it was .2 miles off.
I kept turning over in my head -- would the course be accurate or was this clearly going to be a race longer than 13.1  miles.
By mile 11 I wanted the race to be over.  I was convinced the race was going to be long (and it was) but I every step seemed to just push myself.  I still wasn't running too awful -- a little over 9 minute miles but they felt like slogs.
I kept looking over my shoulder for the 2 hour pacer.  But he wasn't in sight.  Only a handful of runners were with me at this point and a few were starting to pass me.  Always frustrating but I was still on pace for a sub 2 hours, which was my primary goal.
Finally the last mile came about and still the mile markers were consistently off by .2 of a mile.  I could see the buildings were the finish line was, but I knew I still had to make a bit of a detour to get there. I was definitely not on the quickest path.
I did my best to quicken my pace out of fear of missing 2 hours.
I finally hit mile 13 and my worst fears were confirmed -- I was already at mile 13.2.  I tried to put on a brave face for the photographer as I made my way but I know he got one good picture of me and one were my form looked terrible.
Once I clearly saw the finish line, I pushed with whatever I had left.  I had crossed 13.1 miles in 1:57, so, for me, my goal was complete, but for an official finish I wanted to hit this course in under 2 hours, which I did, in 1:59. 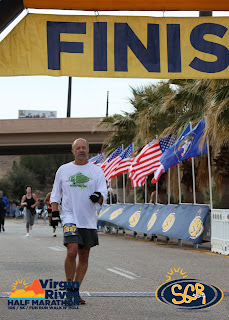 So, I was pretty happy with my finish time.  Yes, I wanted to go faster, but I told myself before the race I'd be happy with a 1:57 - 2:00.
The course was LONG.  Even checking Strava, most people's race came in at 13.30 to 13.35 miles.  I mentally made a note of when I hit 13.11 miles and it was about 1:57 -- closely mirroring my last half marathon.  What I was most happy about was that I had more or less managed a fairly consistent pace.  Although I never found my race gear, and other than the final 2.5 miles, I was holding my own. 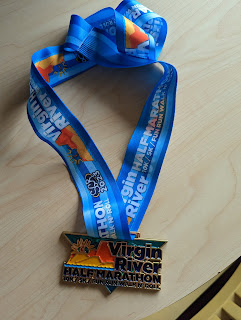 So I had a hard time getting into the course.  Not sure if it felt "all the same", I just wasn't in the mood for a run / race, or that we circled by the finish / start line 4 times.  It was different, mostly flat and easier than the previous editions of this race.  I think I was so focused on maintaining my pace, that I forgot to enjoy the process of running.
Post race refreshments were bananas (awfully brown ones), sports drink, water, and a few other snacks. I think a gourmet cookie provider had some absolute sugar bombs for the race as well (awesome!).  The expo was a great place to start the race, with a warm shelter, flush toilets and a place to clean up a bit after the race.
The race was organized extremely well and there were ample water stops with volunteers who knew what they were doing.  There was one part of confusion where the 10K and half marathon runners sort of milled into together where I think if a pacer hadn't told me where to go, I would've taken a wrong turn.  But other than that, an extremely easy course to follow. 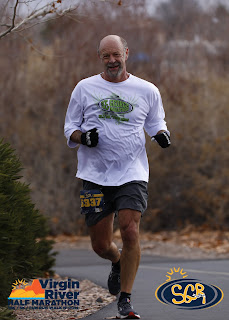 Overall, I was happy with my experience and race.  This will continue to be on my races to do every January and apparently there'll be another new course next year.  It'll be interesting to see what they turn up.