Each winter the race scene in Salt Lake City gets pretty barren.  In fact, pretty much from Thanksgiving until early February there aren't many races to do.

So come the second weekend of January, I head down to southern Utah for the annual St George Half Marathon, apparently the longest running half marathon in Utah.

I believe this race is also managed by the same people who do the venerable St George Marathon.  However, I don't think this course is as nearly as iconic.  The east side of St George isn't exactly known for it's mountain beauty.

The temperatures in St George in the winter are often ideal -- about 10 - 15 degrees warmer than the northern part the state.  The problem is getting down there -- if there is a snow storm traveling the length of the state can be treacherous (nearly 300 miles).  Luckily, this winter has been very light in terms of bad weather so I plunked down the money, made cancel-able hotel reservations and put it down on my calendar. 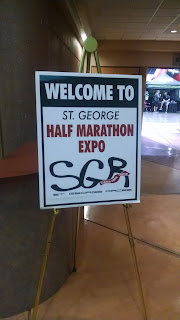 The night before the race I got off of work early and made the trip down south.  It was smooth sailing pretty much the whole way.

Unfortunately, I wasn't feeling top notch.  All week I had been feeling under the weather.  I felt like a solid cold was coming on and on the way down I had the heat cranked up and wondering if I was getting a fever.

The drive was largely uneventful and I rolled in just shy of 7 PM and I got to the EXPO at the Dixie Events Center -- a beautiful building.  It was easy check-in and I said hello to the Ogden Marathon people as well as the Sand Hollow Marathon people before heading out to the Black Bear Diner for dinner.

I stayed at the Hilton Garden Inn -- practically in front of the starting line, which was just awesome.  With a race start of 9 AM, I pretty much slept in until 7:45, ate, used the restroom to my heart's content and then walked to the starting line.  After nearly 10 hours of sleep, I felt like a brand new man.  No lingering cold or anything.  Was it pre-race nerves? 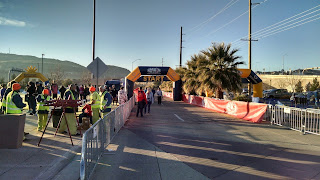 I wore throw-away gloves, a long-sleeved shirt, sunglasses (a must!), a hat and shorts.  I should've went with short-sleeved but overall I was happy with what I wore. 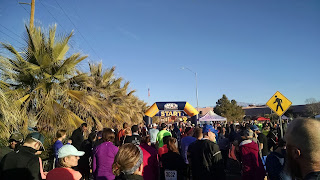 The race started at 9 AM after the national anthem and within 30 seconds of the start I was running.

Almost immediately my knee felt cranky.  I was beginning to wonder if it was going to hold up throughout the race.  Luckily, it just needed some time to adjust and after about a mile I didn't feel it again.

The first 3 miles or so are in a budding business area.  So you are running by a few hotels, dentist offices, and other locally owned small businesses.

There is some budding morning traffic, but the race organizers are pros and I never felt hindered or not safe.

After about 3 miles you dip into a well-to-do residential neighborhood.  It is all city street running here and there are some minor rolling hills.  There are also some sections that are also downhill.  I was banking energy and kept holding back.  I also felt pretty good -- not top notch but good. 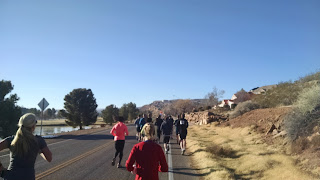 Miles 5 - 7 are probably the most challenging.  While the scenery changes a bit -- you are running by a nice golf course -- you do get a little bit of the iconic red rock / nature scenery to make you forget (a  little) about the hills.  They start off innocently enough but they culminate just short of the 7 mile marker.  Luckily, once you are done with this section, the rest of the course is pretty much down hill or flat. 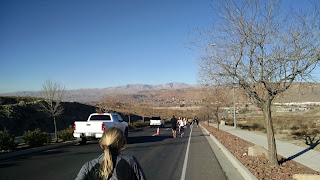 Mile 7 is almost all downhill and here you can really pick up a head of steam.  It also becomes the part of the course where I now have to decide if I am going to race or just finish.

I had banked energy at this point and I felt pretty good.  So I started to nudge my pace up a bit to take advantage of the downhill.  I rattled off my fastest mile as we approached the bike trail.

I love the bike trail section too -- especially seeing the valley and the mountains in the distance.  I tried to get my phone out for a picture but it wasn't cooperating and I didn't want to waste time.  Also, there is a stretch up against the mountains that was slightly slippery.  So I had to really watch out for black ice.

At this point too, you are close to the finish line, but you really have close to 5 miles to go.  It is sort of disheartening to think the lead pack is just about finishing and I still have about 40 more minutes to go (at least).

Looking at my official splits, it looks like I passed a lot of people in my age group.  I had saved quite a bit of energy and while i was hurting I wasn't dying.  Normally around mile 9 or 10 I just want the race to end -- not this one.

I truly enjoy this race.  You get so much variety --hills, bike trail, residential, city streets, etc.  And there is half way decent crowd support as well (nothing like a major marathon but people are out cheering you on).

I was pretty gassed as I was closing in.  I sort of gave up a bit when I realized I wasn't going to get below last year's time (about a 1:52).  Still, I would make a respectable showing and I was completely dead. 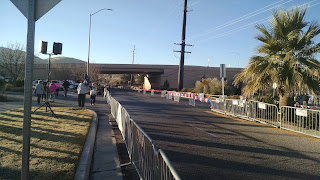 It was pretty awesome to cross the finish line -- a bit of redemption for doing a long after failing in Las Vegas about 2 months ago. 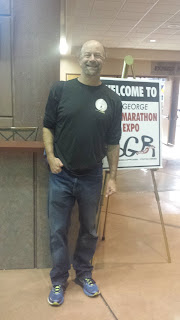 Overall, I was pretty happy with everything.  I wasn't dead and I held a fairly consistent pace throughout the race.  I slowed down during the uphills but picked it up when the terrain permitted.  My pace was 8:43 throughout. 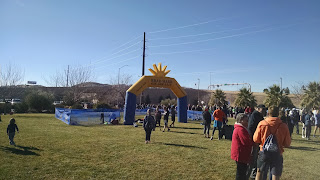 I don't normally set a pace and try to run it.  I almost 100% run on feel.  I know basically what I am capable of and know the price to be paid for going out too fast.  The conditions were simply ideal and I felt like a ran a fantastic race. 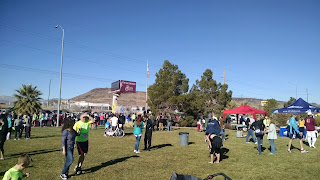 After the race, I grabbed some Gatorade and some oranges (I love oranges after a race) and wound up meeting a fellow runner that runs the Murray Bike Trail. I wound up making small talk and eating a little food for about 15 minutes.

It was after 11 and my checkout time at the hotel was noon.  I still needed to shower, pack and head out.  Again, I love staying at the Hilton.  It is less than a 5 minute walk from the finish line.

I love this race and as long as I am in Utah and healthy and able to run, I'll make it down here to run it.  All told, I got a first-class race, accurate distance / timing, support (although I didn't get any Gatorade until near the middle miles -- luckily I carried my own), a very nice t-shirt and a heavy-duty medal for about $55. 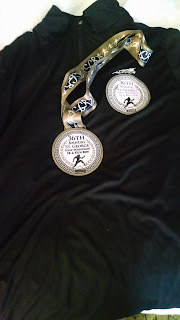 The race is one of the premiere early-season events and I was happy with everything from start to finish.