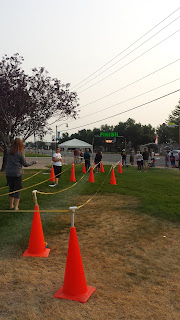 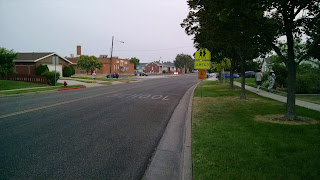 
This weekend I had to run some errands, so I didn't have a lot of time to for a race.  I was very tempted to do a race down near Price UT or even further south, Parowan, UT, but I had to pick up someone from the airport at 9 AM.  So that meant I had to stay in the area and be done and accounted for at the airport at 9 AM.

After sorting through this weekend's offerings, I decided to make my way up to Roy, UT -- a suburb of Ogden and run their 5K race.  It was an annual race from what I could tell and I figured it would properly run and besides, it would be something new. 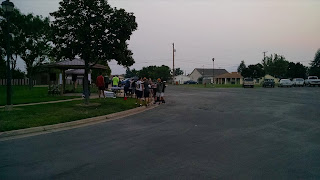 I got there at 6 AM for the 7 AM start.  It was pretty simple grabbing my shirt and bib.  They had a small swag bag too.  I managed to warm up, use the bathroom a time or two and the hour passed by quickly.

The race started a little late, but not by much.  I noticed right away the race was filled with high school students.  It would seem that it is a popular race for the local high school and the alumni there.

I started about 10 feet behind the start line on a wide residential street.  It seemed like everyone in the race took off and left me in the dust the minute the race started.  Lots of fast young folks there.

I soon found myself running with some other middle-aged guys and I figured I'd try to hold with them and perhaps pass them closer to the end of the race.  I made good on that decision for the most part, but the one guy I had targeted managed to pull ahead of me by about 20 seconds.

The race initially was downhill and I was able to take advantage of the offerings.  A lot of the houses that I ran by were older homes, but well kept up.  The police had blocked off the core traffic intersections and I never had any problems knowing where to go, despite a lot of initial turns.  In fact it was kind of fun to see the old-school schools and neighborhoods.

Once we got out of the residential area we arrived at the local high school and turned a corner.  My pace seemed to crumble as I got hit with a bit of a head wind.  It just seemed like the pace I was holding got really hard.  I think it was sort of a mental thing too as I saw a ever so slight uphill. 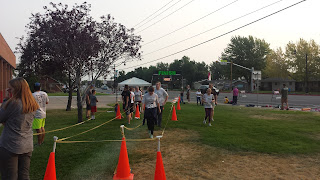 My 2 to 3 was going to be a challenge.  At this point it is a long straight way to the finish and it is mostly uphill.  The hill reminded me a lot of the South Davis Recreation Center 5Ks I do -- in fact this course was very similar in profile.  I really buckled down and dug deep.

The final mile is along the main road and at this point there are some cars buzzing by you.  They had an entire lane closed and you also had the bike lane, so I never felt in danger.  The houses and schools gave way to gas stations and other businesses.  It wasn't a terribly glamorous route, but at least I could sort of make how far I had yet to go. 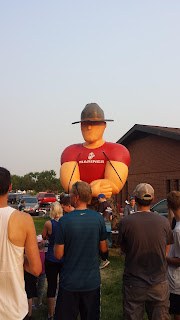 There wasn't anyone super close by and I was doing my best to gain some ground on the few people ahead of me.  It was also somewhat satisfying to pass by the 2 mile walkers / joggers.

I crossed the finish line just a hair over 25 minutes, which is about normal these days.  The race wasn't chipped time, so I had to make my way through the finishing corral and to get my tag taken. 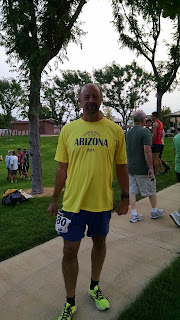 
I was okay with my time.  It wasn't going to be a fast course... with the long uphill at the finish, but I ran well enough to place first in my age group.  I sort of figured I'd top 3 it -- there weren't that many masters runners running.

They had standard post race food at the end -- orange slices, Powerade, water, and bananas.  I think there might've been a pancake breakfast but I didn't see a lot of activity near where I thought it was and I didn't know if it came with the race.  Either way, I really didn't have time for it. 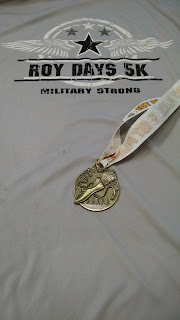 While my Garmin came up a bit short, I am thinking the race was an accurate 3.10.  I checked with some other runners and they had 3.10 to 3.11 on their watches.

I paid $25 for the race, which isn't too bad of a deal.  It was low key but professionally run and the results / awards were done quickly.  They also had one of the best post race raffles, with some decent prizes for a change.

I'd definitely do this race again next year.  I had a good time, it was priced reasonably although it was a bit of a drive for a 5K (about 45 minutes one way).
Posted by Eddie Gaul at 11:20 AM