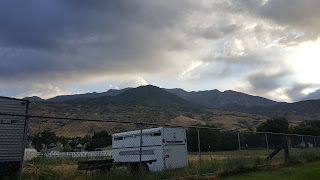 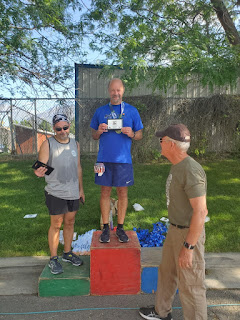 There were a ton of races this past Saturday and I was looking to pick one.  Most of the races were fairly big half marathons that were a bit spendy as well as a bit of a drive.  I don't feel like I am ready to run a half marathon quite yet - at least competitively -- so I found another race -- the inaugural PC2PG race.

Put on by OnHillEvents.Com, I decided to give this race a shot.  They had a variety of distances, from the 5K to the half -- along with a 10K.

The race was located in Lindon, UT about 25 minute drive from my house.  The race's headquarters were at a junior high that backed up to the Murdock Canal Trail that hugs the eastern mountain range in Utah County.

I had never been on this paved trail before and was always curious as to what it was like.  So it was pretty easy to decide that I was going to do this race.

I rolled into the race about an hour before race time.  Hardly anyone was there.  Sadly, with so many races going on that morning, this one was lightly attended.  Also, the majority of the racers were doing the half marathon, which had started an hour before I got there.

So picking up my bib and shirt was easy peasy.  I did some basic drills, socialized and cycled through the bathroom a time or two before the race's 8:15 AM start.

It was a little warm and occasionally a few drops of rain fell.  I knew that the rain was going to be short-lived though.  There just weren't enough clouds to warrant a full on storm.

The race started promptly at 8:15.

With most races that I haven't done before, I am always worried about course markings.  You just never know when a volunteer is going to send you down the wrong path but this race was about as simple as it could be.

Just run down a residential street for about a third of a mile, hook a right on the trail and keep going until the second water stop.  About a 100 yards after the 2nd water stop, turn around.  Truthfully, the race was as simple as that.

The first half mile was uphill and I hadn't really warmed up, so I slow got into the groove as other runners passed me.  I was running with the 5K runners as well and I kind of knew who was running what.  I let the people I know who were faster get in front of me and I got acquainted to running.  I really wasn't sure what I had...

I liked the bike trail.  It was plenty wide and there were other runners and many cyclists and dog walkers on it.  I just stayed to the right and I was fine.  I felt like I was running pretty well and was actually mildly surprised to see an 8:30 flash on my watch for the first mile -- despite the hills.

The sun was out and I was working on a good sweat.  Mile 2 passed by with an almost identical split from the first -- at least I was consistent. 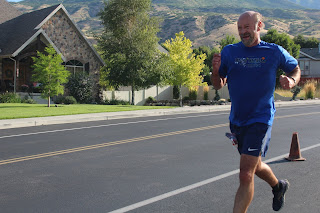 It was at this point that the 5K runners turned around.  I suspected I was in 2nd place, maybe 3rd -- at least for the men.  I was tailing the second place woman, who I knew was faster than me, so I was right where I wanted to be.  I looked behind me and a few guys were behind me but it was too early in the race to truly worry about them.

Not sure what happened in the third mile, but I suspect I was feeling fatigued and my confidence was lagging.  I had wondered if I had started out too fast and to be honest, I was hitting some headwind which made holding the tempo pace that much harder.

The second water stop was as advertised and I hung a right, ran another 50 yards or so and then turned around at the sign.  Running back on an out and back course is kind of nice because I could suss out my competition.  The two guys that were behind me were about a minute or 90 seconds behind me, so I couldn't let up.  I couldn't tell how many other 10K runners had already turned around because the half marathoners were coming back from their point-to-point race.  I still figured I was in 3rd place -- potentially 2nd.

Heading back was nice.  I knew where I had to go and I knew how much further I had to run.  I was passing some of the slower half marathoners, which buoyed my confidence.  Granted, they were at mile 11 while I was at 4 or 5.

The course was actually quite stunning and I took time to appreciate.  The bike trail was clean, safe and while I did have to cross a few roads, their were crossing guards or virtually no traffic to worry about.  I'd definitely like to explore this trail more in the future. 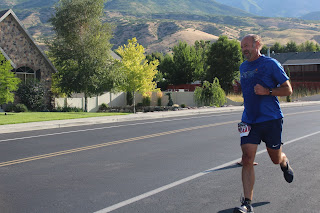 I kept looking back --- searching for the guys tailing me and I couldn't see them.  Had I put that much ground on them?  I worked on passing the second place woman and really pushed it during the last 2 miles.  Occasionally there were 5K walkers but for the race was sparsely populated.

Once I turned the corner to head back to the school I looked behind me and I could not see my pursuers.  Just in case though, I really let loose and flew the last quarter mile.  It was nice to be off the trail and back on street and having a nice downhill. 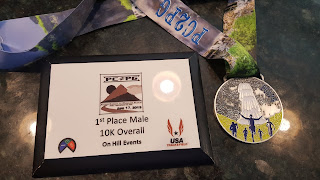 First off, my speed work isn't suddenly paying off and nor did I set a personal best.  It was the luck of the draw that only a few people ran the 10K.  It was nice to "win" but let's face it, the victory is sort of hollow.

I snagged a nice plaque -- OnHillEvents always has nice plaques to the overall winners and I got a heavy-duty finisher's medal.  I really like the lanyard on it.

The course came up a little short for me.  It was fairly straight and narrow so maybe my Garmin was off going through an underground bridge or two, but my time was about 40 seconds faster than "normal".  The course was well marshaled and the water stops were done well (there were 3). 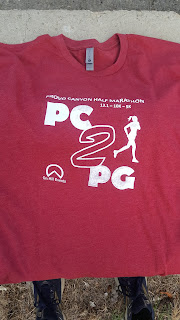 Post race festivities included typical stuff: sports drink, ice cream sandwiches, and fruit.  I paid about $40 for the race a week before the event, which is typical for a 10K race these days.  The shirt was nice but I like the pure-tech ones.

There were a lot of races to choose from this past Saturday and it was reflected in this race, unfortunately.  I think if it was positioned better there would've been more runners.

I really enjoyed the race course and would definitely consider doing the half marathon next year, as that starts near Bridal Falls in Provo Canyon and sports a largely downhill profile.

I ran well enough.  Definitely not an earth-shattering performance but all things considered, I ran intelligently and with some guts, as indicated by the push at the end.

I've raced over 400 races at this point in my "career" and prior to today, I had "won" 2 of them.  Again, the race was lightly attended (130 total runners for all 3 events) and I had a good time.  I'll mark my calendar for next year's edition on this one.