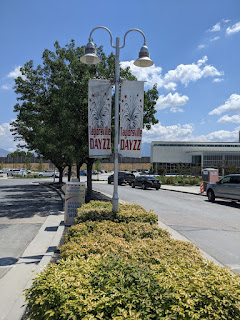 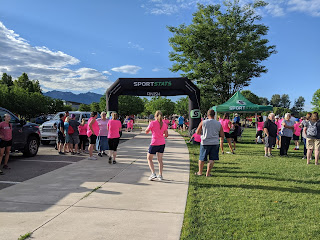 In 2019 before the pandemic, I jumped into the local 5K race that kicks off the city of Taylorsville summer celebrations.  It was well-organized race that is less than 10 minutes from my house.  It is also very affordable -- about a $20 race.  So I've had it tucked into my memory as a "do it again" race. 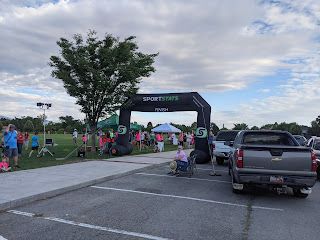 I rolled into the park around 6:15 for the 7 AM start.  I was one of the first there.  I had picked up my bib the previous day so I was ready to run.
I wound up doing about a mile warm-up around the park's circumference to loosen up.  I felt really sluggish and at first I was beginning to question whether I had it today.  I had had a little caffeine but it didn't seem to have had any effect.  My legs felt tired and mentally I was tired.
Fortunately, after doing some dynamic warm-ups and the run, I did perk up. As I toed the line at about 7 AM though, I still felt out of it. 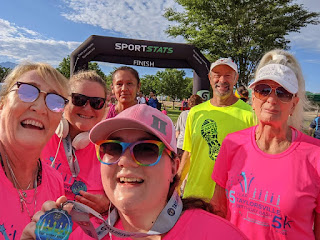 The gun went off and so did I.  There was a cap of 200 runners at the race and despite it being run on a walking path it wasn't crowded at all.  The race director had encouraged walkers / not competitive runners to line up in the back, so I was able to quickly get up to pace without having to navigate around too much.
The first mile I assumed was gonna be slow.  As I made my way around the paved bike / walking trail, I felt in control and not too fast. As per usual, my race instincts kick in and I am all business. I could certainly gut out a 5K.
I had a few people in front of me and one guy who I thought was in my age group behind me.  Only the 1st place in each age group had a shot at winning something and so I was hoping that I'd be a lucky winner.
By mile 1 I had broken the guy behind me and I was working off the 2nd place female and a few younger runners.  I was trying to hit around sub 8 minute miles and have something left for the final quarter mile.  I am still a little unsure of what I have these days. 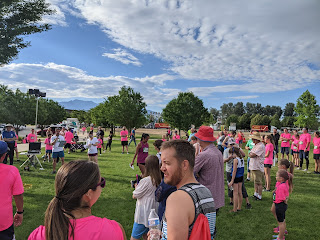 Around mile 1.5 we were led off of the park's walking trail and onto the street.  I was hurting at this point and the few tiny mole hills that were around seemed to take more out of me. Also I was beginning to question the quantity of food I had had for breakfast: some dry Wheaties, a banana and an apple.  It seemed too much.
Fortunately, the next mile or so was pancake flat.  We ran down a canal road of some sort that was line with some expensive houses.  It was incredible scenic and probably the most enjoyable part of the race.  There were also a few spectators here urging us on.  Finally we got dumped into a neighborhood before making our way back to the fairgrounds.
I had remembered this section from the previous year and I focused on just turning my legs over.  I was still working on catching up to the 2nd place woman, but I had lost some ground.
The final mile was tough.  Normally this is where I crash and burn.  But I was able to hold it together here and turn in a sub 8 minute mile.  Normally, my 5K splits start fast, medium and then slow.  It was also heartbreaking to see the finish line and have to run a bit beyond it and then circle back from the south to reach it.
I saw the elusive 23 minutes flashing on the timer's board as I approached the finish line.  Could I do it?  Could I hit sub 24 on a flat, legit 5k? 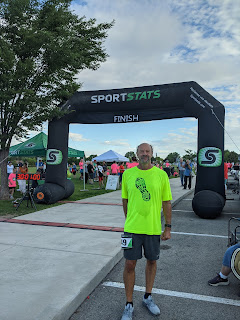 Sadly, I just missed breaking 24 minutes.  I ran under the finish line in 24:02.  Some of the pauses as I regrouped myself in the middle miles cost me.  But I was close -- oh so close.
I had a sneaking suspicion that I had won my age group.  The winner -- who finished in 15:30 or so -- was an older fellow so he was excluded automatically from my age group.  And while I hadn't gotten a good look at everyone in the race, I didn't see anyone in my age group that was close to me (although with chip timing you never know).
I did win my age group, and I also snagged my first ever cash prize of $25.
So I have mixed feeling about my performance at this race.  I was shooting for a 23:45.  My goal was hitting a sub 24 but I felt capable of hitting my goal.  However, I did have some residual tiredness from last week's half marathon and I'll be honest June hasn't been a great training month.  That being said, I was very close and I finished 50 seconds faster than 2019.  Progress! 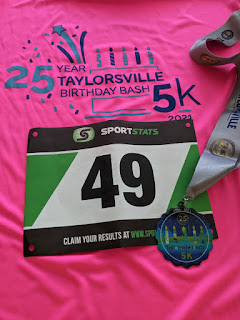 I paid about $20 for the race. I got a nice tech shirt (although I may be a little reluctant to wear it on account of its neon pink), a jam-packed swag bag, and a nice commemorative medal.  Post race refreshments were water, bananas, and granola bars.
I ran the same course as 2019, but this year my Garmin read 3:04 miles.  In 2019 it was 3.09 and most people I talked to had 3:09 to 3:11.  So I am presuming this was a legitimate course (either that -- or I am really good at running tangents).
I definitely have some work to do to keep bringing down my times.  I took some time off of running in early June and this past week I didn't run much, on account I was incredibly sore from last Saturday's half marathon.  But this was yet another positive race for 2021.
Posted by Eddie Gaul at 11:40 AM