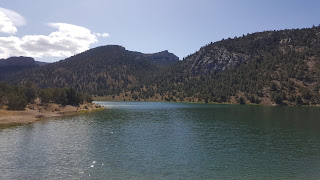 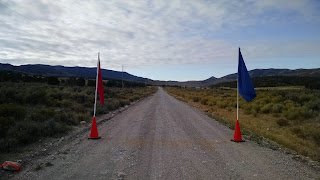 5 years ago I ran the Take it to the Lake Half Marathon in Ely, Nevada.  It was a small race at the time and certainly challenging.  The race back then started at Cave Lake State Park and ran down to the highway before having to run back up.  It started at about 7500 feet elevation, went down to about 5500-something.  It was challenging and warm and I remember most of the return trip to be a sufferfest.

For those not in the know, Ely is a little mining town just north of the Great Basin National Park in rural Nevada.  There isn't a whole lot out there and is about a 3.5 hour drive from Las Vegas or Salt Lake City. But it is a beautiful part of the country and one I enjoy going to.


The race is held Saturday morning at 7:30 AM.  I got into Ely on Friday afternoon and stayed at a local hotel about 20 minutes from the race start.  I did NOT sleep well.  I usually don't sleep well the night before a race in a hotel in a strange city. It was a long wait in the shuttle.  There were only about 15 of us in the race and 11 of us crammed into a Suburban.  It was definitely more comfortable than standing in a field for an hour waiting for the race start (the temperature was in the low 30s).

I was bundled up and had brought a ton of winter gear.  I didn't plan on running in the heavy gear, but I was anticipating a long wait and I didn't want to freeze.

The time in the van passed fairly quickly as the dozen of us made small talk.  After a while, we started driving up the dirt road.

One of the main reasons why I did this race was to see the Success Loop -- a 33 mile road that goes behind the mountain range on Ely's East side.  It is pretty remote country and I had heard rumors that regular cars couldn't make the trip.

The drive took about 30 minutes and the road was a bit rough at times but our driver knew what she was doing.

With the sun coming up, it gave me a chance to survey the course.  I knew from the course map the race provided that we were in for about 6.5 miles of climbing -- from an elevation of 7500 to just over 9000.  Fortunately once we reached the summit, we'd have about 1500 feet decline.  I was happy to note that the downhill was the most stunning part of the course and the uphill part -- just didn't seem that bad.  However, I did realize that miles 4 - 6 were going to be the toughest parts. 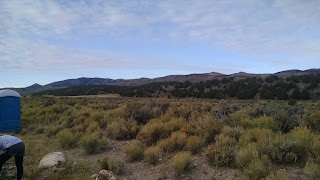 We had about 20 minutes to kill before the race start.  I stretched out and used the single porta-pottie that was available.  It felt more like a training run than a race, but with only 20 people or so, that's the way it was gonna be.

The race started at 7:30 and running felt hard.  At 7500 feet of elevation, the air was definitely thinner.  I had stripped down to running gloves, shorts and a short-sleeved shirt.  Thank goodness I went with that.  While it was a little chilly, it wasn't bad and I felt like I had made a good choice. 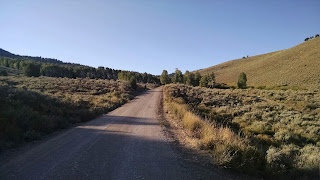 The lead pack took off and for a few miles I had a shot at 3rd place overall.  But the next two guys quickly over took me.  They were only giving out top 3 awards and with a race this small, I wasn't expecting age groups.

I was content to keep going at my conservative pace, because I knew few miles were going to be challenging. 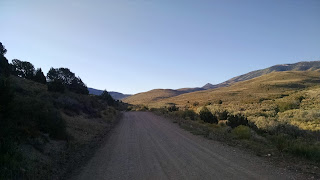 With me out of contention for any awards I settled into a comfortable pace.  Occasionally I'd take out my phone and take a photo of the area.  Despite my slow pace, I felt good about it.  I was holding back and I had hopes that maybe I'd stick around to maybe another person or so and catch them on the downhill.

The course -- as advertised -- was dirt road.  The initial miles were graded / smooth dirt.  I was worried about getting stones in my shoes, but it wasn't that bad.  I didn't get any bounce, however, from the ground.

I was glad to be running solo the entire race.  I was hanging around with one young woman for a while but she was much better at handling the hills.  She was able to power hike up some of them -- when they got bad -- while I just shuffled up them.  I am not sure which was more efficient but I ran the entire for the first 6.5 miles. 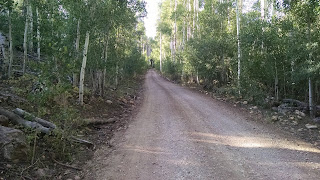 The open fields after about 3 miles turned into shaded aspens and pines.  I loved this section of the course.  The hills were definitely upped a notch and my head was swimming with a lack of oxygen at times.  Occasionally I'd look behind me only to see the ground I covered.  There was no one else behind me.  Once in a while I'd catch a glimpse of the woman I was chasing, but I was by myself.

I thought the hills wouldn't never end, but finally they did.  Thanks to the shuttle ride to the start, I had time to take some mental notes of when the hills would end.  It was a moral booster to see the scenery change to the point where I knew the hills were just about done.

Finally, I reached the start of the 10K race.  There was a water stop / bathroom there and the 10K was advertised as all downhill.  While I still had 6.2 miles to go, I knew I was on the homestretch now.

My motivation to race suddenly picked up too as my turnover increased.  Gone were the 14+ minute miles.  Now it was time to fly.  Thanks to the gravity assisted hills, I was no longer grinding at death-march marathon pace, but 10K pace.  It felt great. 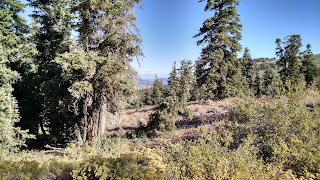 There still wasn't any men in front of me, but occasionally I'd see the woman below me zig-zagging down the road.  I had hopes of catching her -- nothing more than for my own ego, but she clearly was enjoying the faster pace as well.

The road at this point got a little more rugged.  It wasn't terrible for running, but you had to sort of pick and choose your path.  I didn't lose any time on it, but I had to concentrate on where I was running to avoid tripping on a rut or having to work extra hard by running in a ditch.

It was sunnier at this point but thanks to underdressing, I was completely comfortable. I had throw away gloves but I opted to keep them.  My hands tend to get cold, even in warmer weather.  I also got the slight scent of the Ruby Mountains -- it is like a sweet, flowery smell.  I love it and it seems to only pop up in the Rubies (although I must confess to smelling it around in Utah but it seems mostly present out in Nevada). 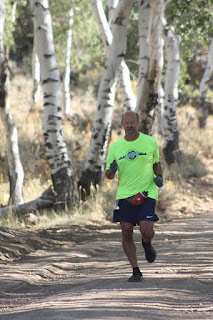 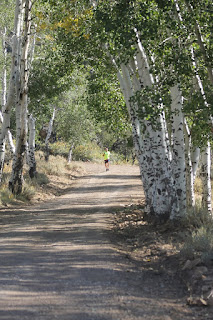 The mile markers in the race always seemed off -- by about .20 of a mile usually.  I was really worried about the course being long. I was sipping Tailwind and drinking from the aid stations, but my training hasn't been that awesome for putting in major miles.  Fortunately, the race measured pretty close and I didn't have to run an extra quarter mile.

Around mile 11 or so I started to encounter some of the 10K walkers.  It was an ego booster to fly by them and receive a bit of encouragement from them.

The final stretch of the race is a bit cruel and I remembered it from the last time I had done the race.  After 12.5 miles of running on dirt, you find yourself on red asphalt.  They had a volunteer to help you turn left and then you have a nasty incline.  Distance-wise it isn't more than .1 of a mile but it is pure up.

I started to run it in hopes I could power my way up.  But my legs were just dead.  And despite my best efforts, I was going only a fraction of a bit faster than a pair of 10K walkers in front of me.  So I just power hiked up it. 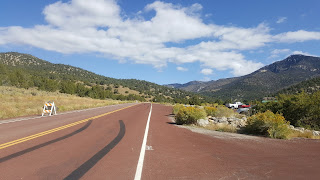 Upon reaching the top, it took a big effort but I wasn't going to disappoint my "fans" and not run through the finish line.  Fortunately, after a bit of flat running you have a massive downhill to finish near the shores of the lake. I finished the race in 2:20 and change.  My overall time wasn't too surprising and I knew it was going to be a slower half marathon.  While I did get over 6 miles of downhill, I had more than 6 miles of solid uphill.  That is hard to make up.  Also consider the elevation and the lack of oxygen and I had more of an adventure / fun run, rather than something I could try and "race".

I was surprised at how good I felt. I haven't done many long runs so I wasn't sure that I would even have the endurance to do this.  I've put in a few 10 - 13 mile runs, but not a lot of "over distance" training. 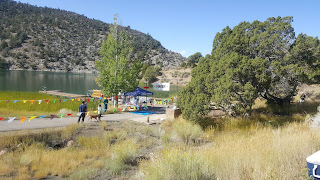 There was an aid station every 2 miles.  They had some sports drink and the half way point had gels.  I am glad, however, I carried my own Tailwind.  Having the extra calories helped and I wasn't dehydrated when I finished.  I also dressed correctly... I was never over-warm nor cold.

For a very small race, this event was a gem.  The aid stations were manned and amply supported.  There was never any doubt about where I was to run (it was hard to take a wrong turn but they even had markings on the odd-ball locations).  My only gripe, perhaps, was that the mile markers never seemed to line up with my Garmin until the end.

The race, like in 2014, had a post-race BBQ and raffle.  I had disappeared to my car after the raffle had started so I may have won something.  But I wasn't in the latter group that was being chosen.  They were also cool in that they had veggie burgers for me to eat.  In fact, I had two. 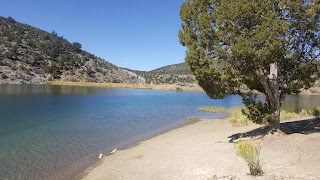 The weather after the race was absolutely perfect.  It was sunny, not too hot, with a pleasant breeze.  The picnic was on the shores of the Cave Lake, so the setting was picturesque.

I paid close to $70 for the race.  I thought it was a steal considering all that I received.  I got a finisher's medal, t-shirt, a well supported course, a beautiful course and plenty of post-race food.  Yeah, the course is challenging and probably not PR worthy, but I really enjoyed the scenery and would probably put it as one of the most scenic half marathons I've done. 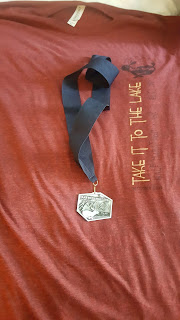 Hopefully this falls into my calendar again next year.  This was a great weekend and I had a lot of fun. 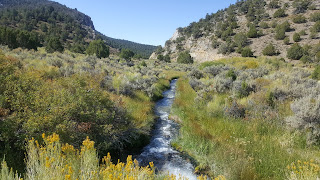