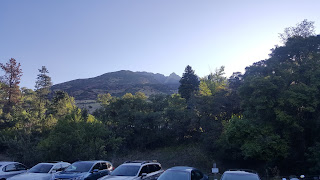 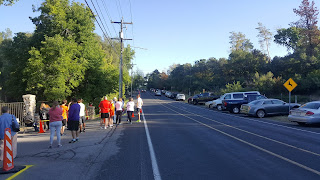 The Salt Lake area had a big race this weekend --- the Big Cottonwood Marathon, which basically steals the thunder of any other races that are planned during the weekend.  In fact, there were very few races in the area, except for this one.

This race definitely stands out on account it is held on a Sunday, which almost no races are held on a Sunday here.  But this race was held for the benefit of the Carmelite Nuns.  They have a fair that is going on in order to sell goods for their order and it attracts an early group of people.  Plus the entry fee goes to support the cause. 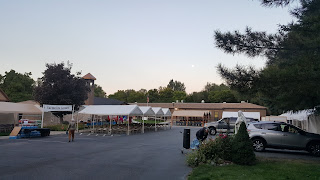 The race was easy to find -- just a minute off the freeway.  Holladay Utah is probably best known for being a haven for the wealthy.  There were a ton of older large houses that lined the main drag and the street was tree-heavy and shaded.

I got there fairly early and managed to snag a decent spot.  Bib pick-up was a snap and within 10 minutes I was back in my car.

On account they were anticipating a large crowd for the fair, they had a ton of bathrooms, so there was never a line and the race, from what I saw, was fairly small -- maybe 100 - 125 people.

By 7:30, I decided to get in a mile warm-up and get a sense of the course.  I was warned that the start of the race feature a bad hill and upon looking at it I didn't think it was that.  Sure it was a hill, but it wasn't a killer one.  I did note that the return mile was mostly going to be downhill.

The race started at 8 AM.  I am always hesitant on charity races on account that many are poorly run.  This one -- they knew what they were doing from start to finish.

Sure enough the first 1/8 of a mile was up hill and I figured that was going to be the end of the "big uphills".  I was quickly proven wrong.  We hung a right and got a very brief respite from the hill only to be encounter an even larger, more steep hill.  Really? We have to run up that?  How did I miss this on my warm-up?

Originally I had started out in 5th place, but quickly I was swallowed up by the crowd -- there were a lot of high school aged runners and clearly their much lighter body frames could take the hill much quicker than I could.

Finally, after a half mile or so, we reached the top the hill and we got a bit of a downhill.  I quickly found my groove and started to pass some of the runners who had went too fast.

I wasn't too surprised to see a "9" flash on my Garmin after the first mile.  There definitely was a penalty to be paid for hills at the start.  I just hoped I had enough in my legs to take advantage of what I would hope to be the downhill second half.

The course featured a lot of twists and turns in the residential areas in which we were running.  There were volunteers at critical corners but if I hadn't been following anyone I would not have known where to go.

I was able to get back some of my lost time on mile 2.  There were a few rolling uphills but for the most part, it was a fast mile, with it primarily being downhill.  Maybe if I could hang on for the last mile I'd have a decent and not too embarrassing of a race.

I figured mile 3 would be fast but there were once again a few uphills.  Just when I was working up a head of steam I'd hit a tiny roller that would ruin my pace.  So frustrating.  With about 3/4ths of a mile to go though, I was in familiar territory as having warm-up on the course at this point.

I quickly looked behind me and saw that no one was chasing me down but I was working against 3 people that were probably half my age.

The last quarter mile was primarily downhill and I really worked at it.  I didn't really know what my overall time was but I knew the race was going to be slower than usual for me -- thanks to the hills.

I flew into the finish line and clicked off my Garmin -- turning in a 26 minute 5K.  Definitely slower. 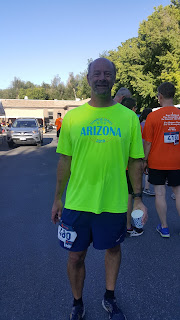 I grabbed some water and chatted up some of the folks I had run with.  They had water at the end and breakfast consisting of eggs, potatoes and sausages were served.  They had a very interesting grape lemonade that was worth a repeat trip.  In addition, they had bagels and fruits.  All good stuff.

I was hoping for age group awards.  Sometimes these small races have them -- sometimes they don't.  This race apparently didn't have them.  They just gave out awards to the top 3 in each gender.  To be honest, I'll be lucky to see overall results. 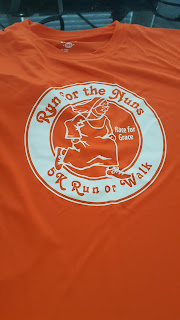 I paid $25 for the race.  I got a pretty nice tech shirt -- I was expecting a cheap cotton one, but this one was nice.  They even had a drawing at the end with so many prizes that I actually won a pair of cordless headphones.  I definitely needed a pair for some of my driving trips.

My performance wasn't the greatest, but given the nature of the course, I wasn't expecting a PR race.  I did run as well as I could and despite being gassed after half a mile into the race, I managed to regroup and do okay.