This Month in Running - April 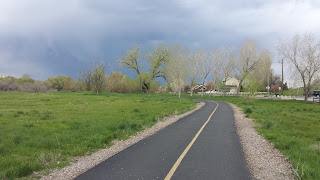 
April wasn't a terribly productive month.  Just before April started I was doing a routine tempo run when in the final stretches I pulled / tore a hamstring muscle.

I figured I was going to be down for a day or two, 72 hours tops.  But this injury took me out for about 3 weeks of April.

About the 3rd week in, I was able to resume running and it wasn't until about the last week of April that I could put in a serious week of training.

Most of April was spent walking the bike trail and rubbing CBD oil on the injury.  Not very fun.  With every runner that passed me on the bike trail, I tried to look them in the eye as if to say, "I am on the sidelines, but I am one of you."  I really just wanted the freedom to run again, despite in March being mildly burned out on it. 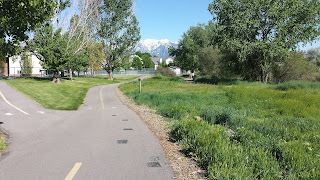 I did manage to get in one race and dropped out of a few others.  Normally, I drop out of one race a year: mostly due to conflicts, an injury or sickness.  So far this year (I am writing this in May), I've dropped out of 4, including deferring to next's Salt Lake City Half Marathon. 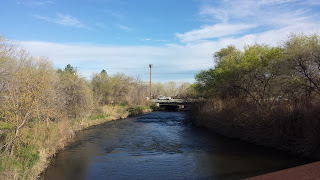 
Regular readers know that I really enjoy running along the Jordan River.  Daily, I run on the Murray City stretch.  They've been making some significant improvements to the trail, including new signs and general clean-up.

Since moving back from Arizona last year I noticed a steady decline in the trail.  More trash, more people camping and just signs of riff-raff.  In some areas I was feeling distinctly "not safe".  In fact, I was warned a time or two that it might not be a good idea to go too much further north than my usual turn around.

But Jordan River Commission has been making a lot of changes.  The addition of the signs, clearing brush (making it harder for people to hide along the trails) has made the trail a bit more exciting as well as safer.  This trail was one of the things I truly missed when I lived in Arizona last summer.

I am also working on a new cat. This cat is in the same location as my old feral cat and in the past this cat ate whatever my old cat didn't finish.  This one isn't as regular but it is slowly starting to trust me.  It gives me a sense of purpose to come out and feed this cat.

In closing, though I am glad I am running better now.  I still have some tightness / not "one hundred percentness" in my hamstring, but for the most part I can start logging some miles again!