It's been a while since I've done a running update and I had a few minutes tonight and figured why not crank out an article.

So how is my running since returning to Utah?  Not too bad.  Although my endurance is completely gone -- it would seem.   I lived in Phoenix for nearly 60 days and my longest run there was about 11 miles.  The last 2 of it was done at a shuffle, largely because I was dehydrated.  Suffice to say training for distance in Arizona -- particularly in the summer -- was tough.

I have been trying to build my mileage back up as well as my endurance.  With the Las Vegas Marathon coming up in November, I sort of feel like I am behind the 8-ball as far as training.  Looking at some of the training charts, though, reveal I am pretty much on target.

The weather in Utah is warm but not insanely hot.  We have had some bad air though from the surrounding fires.  California's largest wildfire's smoke has drifted into Utah causing really poor air quality.  So my training has been hit and miss.

I have been getting anywhere from 30 to low 40 miles per week with usually a short race and a long run on the weekends.  Doing a 13 mile long run seems to be a challenge though.  Hopefully that will change.  I am using the shorter races as speed workouts.  I haven't really seen much of a change in my overall times though despite a steady diet of short races.

I know what I need to do to get marathon ready though.

Other than some general fatigue / soreness, I feel pretty good.

My weight hit a high of 188 pounds in Phoenix.  I am not sure why, but it seemed like as soon as I hit town, the scale creaked at a 188.  When I came back, I've been routinely seeing 184 - 185.  Not sure what happened or if it an altitude thing.  But I have been focusing on eating better and really watching my portion sizes.

I've sort of lost count of the number of marathons I've done.  Yeah, I know I can go over to Athlinks.com and count but it is somewhere around 27 or 28.  Last year's marathon left a bad taste in my mouth and I really haven't had a burning desire to run another one.  I had signed up for the 2018 edition of the LV Marathon last year.  This will be my 10th time participating in the race and each time I've done the marathon.

Presuming my training goes well, I'll attempt this marathon.  I suspect, though, that it'll be my last one.  I don't have a strong passion for it any more (full marathons that is) and clearly I am not getting better at it.  Also the payoff has gotten less for me.

I could totally be wrong.  Maybe I'll have a great race or the spirit of the marathon will come back, but the last half dozen marathons haven't been very "fun" experiences.  But I am sort of bracing myself to say, I've done enough. 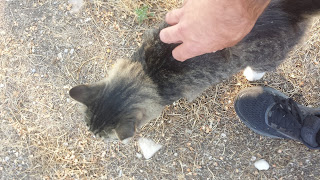 Faithful readers may recall that for the past year or two (or more) I've been feeding a feral cat on the bike trail on a near daily basis.  When I first ran into the cat I couldn't get near it, but anytime I left food, the food would be gone -- sometimes in minutes -- but always by the next day.

In the spring, we had a pattern down.  The cat would wait for me at a ditch around 5 PM and I'd swing by and drop food.  It would give me a cautious meow before eating the food in the safety of the tunnel.  In short, I never was able to touch it or pet it in any way.  Remember this is a feral cat... the same as a wild squirrel.

When I left for Arizona, I was concerned about the cat and made arrangements with several people in order to feed it.  And it did get fed. 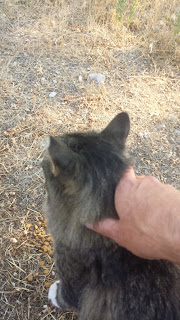 When I got back, I spotted it but our times never really synced up.  There is plenty of mice to be head, so I suspect it hunts every day and doesn't need my assistance. 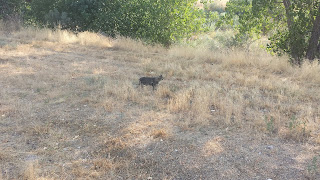 The other day I was walking along the trail and I spotted it in the open field and I wound up dropping some food for it.  It watched me for some time, meowing and basically excited to see me.  Then the surprising thing happened -- it came up to me and started to rub against me.  Frankly, I was shocked.  This cat had NEVER done that before.  It was very emotional to have this happen and made all the efforts that I have done over the past few years worth it.

In the subsequent weeks I haven't seen it but as the weather gets cooler and the hunting gets a little tougher, I am sure our routines will get synced back up again. 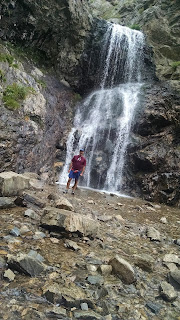 In short, I am tickled pink to be back in Utah.  I reported on this before, but pretty much everyday I want to wake up and kiss the ground.  When something is just a bad fit and you just need to get out, your freedom is priceless.

I still need to take advantage of the things here.  I've only done a few hikes since being back but I've already been to Wendover twice and done a hike or two.  I also have my running route.

I am still discovering people who don't know that I am back and they are shocked to see me as I sort of had sad good bye to the area and in all honesty had gave up on ever coming back.

Moving to Arizona was a bit of an expensive experiment.  I had to leave my current job, try a new one and then come back to my old job (luckily I am on good relations with everyone) and I had invested in license plates, driver's license, and paid a bit of money for food and rent.

I did get some new life experiences and came to realize what is important to me and what makes me happy.  So in some respect, while painful, I learned something about myself and about life as a result.  Sometimes you learn a little when you make a mistake or a wrong turn and this is one area where I felt like I grew a bit.

Since I've been back though, I almost, want to kiss the ground.  I am definitely very grateful to be back. 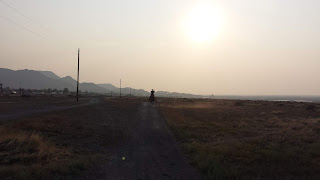