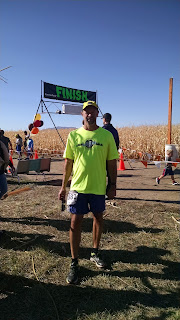 
In 2014, I did the Halloween Harvest Half Marathon and had a pretty decent time.  The course is flat, they had lots of perks and it fit into my schedule pretty well.  Last year, I noticed a vacancy in my races when it didn't come up, but I jumped at the opportunity when it popped up this year.

The race is held at Black Island Farms, in Syracuse Utah.  It is very close to the Great Salt Lake and the area hasn't been inundated with cookie cutter house.  Black Island Farms has a fall festival that is mostly geared for children that involves outdoor activities, pumpkins, and a massive corn maze.

With the weather looking good and a need to get in a 13 mile run I decided to jump into this half marathon and see what I had.

I rolled in about an hour before the race and wound up meeting a friend of mine, who I waited around 90 minutes with before the 2015 Ogden Marathon.  It was nice to have someone to talk to and it had been nearly 18 months since I had last seen her.  She is blazing fast and actually wound up winning the female half marathon race.

I grabbed my bib and shirt and managed to use the bathroom a few times.  They had a small, informal Halloween costume contest before the race started.

The race starts along the main road and after a mile or two starts getting close to the Great Salt Lake.  In fact, I saw some discarded gels in the ditch from the Layton Marathon that occurred 3 weeks ago.

I felt pretty good at this point, but I felt like I was holding back.  I could feel a little fatigue from the Lake Tahoe Marathon that I had done a few weeks ago.

As the race progressed, I could feel my legs becoming more tired and tired.  Also, while my Garmin reports that the trail was downhill (just slightly) it just seemed like the trail was slightly uphill.

The last 2 miles, I was largely running by myself.  Occasionally, someone would pass me, but I was definitely done.

Also, the last 2 miles are the loneliness.  You are running along a back road with even less to look at.  The only thing that kept me going was knowing that the finish line was coming up.

I couldn't even muster a final push at the end.  I just simply finished, grabbed my finisher's award and I could've kicked myself with the dawning realization that I had just run my slowest, non-challenging course half marathon. 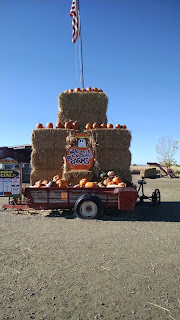 The finish line had the typical post race fare:  chocolate milk, bread, fruit, water and Powerade.  I quickly grabbed some fluids and sauntered back to my car and stashed my glass mug (very nice).  I was really stewing over my lack of performance.  I felt good when I started and by the end I couldn't even muster a very solid pace.  My legs simply felt dead.


I hung around and socialized with my Ogden Marathon friend and another friend who I had met during the Legacy Midnight Half Marathon this past summer.  It was completely awesome to have some people to chat with about the race.  The latter person and I had run the Legacy Marathon and she had finished a few minutes after me during that race.  This race, she too, struggled.  So there could've been something in the air.

The aid stations were roughly every 2 miles and the volunteers were awesome.  I probably should've carried my own, as I think I was dehydrated at the end.  It also seemed a bit warmer than what it was.  I did pop a gel around mile 8, but that hadn't helped at all.

The course was well marked in that all the important intersections were marked and they had volunteers at them.  For a pretty small race, I have to give props to the organization.

The race was okay for the price paid.  I had a coupon and I registered a few days before the start, so I wound up getting in for around $55.  I wish they had age group awards (not that I would've won any), but there were strictly awards for the top 3 finishers for each gender.

This race left a bitter taste in my mouth.  I had fun, I completed yet another half marathon, the course was accurate but I just felt disappointed with my performance.  It also is a clear indication that I am going to have good races and bad ones and that I need to take some rest periods.

After the race, I headed over to the Kimchi House (I am in love with Asian cuisine of late), which I had heard had good Korean food.  I definitely enjoyed myself there and that helped alleviate my sorrows. 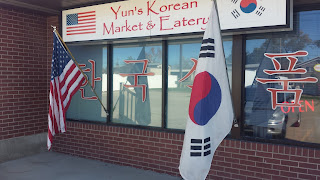 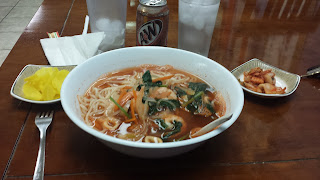